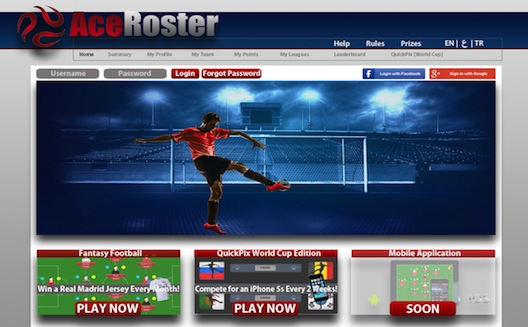 With support from Silicon Valley, a Palestinian entrepreneur who built the first Arabic fantasy football platform, is hoping to go global.

You might say that Talal Jabari, founder and CEO of Fariqak, is having a good year. One month after receiving an investment pledge of around $100,000 USD from Arabreneur’s first investment round in January (and another big sum from an angel investor), Fariqak was selected to attend the Blackbox Connect immersion program in Silicon Valley, where Jabari pitched his idea to “big names, VCs and entrepreneurs, including senior Google for Entrepreneurs staff.

Now, building on their feedback, the Palestinian entrepreneur is gearing up to launch a global version of Fariqak, which means ‘your team’ in Arabic, with the English name Ace Roster, just before this year’s World Cup in June. Will he be able to scale his platform to serve the global market?

As it stands today, Fariqak allows users to select their own fantasy football team, using players from the English Premier, German, and Spanish Leagues, selecting across the leagues or limiting themselves to one, putting them together on a team. Each week, fans can see how their team is stacking up, thanks to an algorithm Jabari’s developers built to cull information from multiple sports reporting sites. Whether they use the platform in Arabic, English, or Turkish, the users who come out on top stand to win a jersey signed by Lionel Messi, the superstar FC Barcelona player.

Perhaps one of the reasons that Jabari’s success has come so easily this year is that his passions for sports – and hard work – runs deep. Growing up in East Jerusalem, he recalls saying up until the early hours of the morning to watch Michael Jordan’s Chicago Bulls dominate the American National Basketball Association; his fondness for the Bulls “was part of the reason I went to university in Illinois,” he says.

For more than a decade after college, Jabari worked as a documentary filmmaker, chronicling life in Palestine with his production company Capture Productions. “Thirteen to 14 years of my life were politics, politics, politics,” the entrepreneur recalls. Yet once he’d saved up enough capital, he pivoted into entrepreneurship, launched Fariqak, and self-funded its growth for a year and a half.

His experience in filmmaking was crucial for his relative success as an entrepreneur, he says: “If making a film doesn’t teach you anything else, it’s to know what your audience wants. It’s the same thing with a startup.”

Today, after gaining 35,000 users in ten months, Jabari is continuing to put the customer first, launching a series of YouTube videos to explain fantasy football to the uninitiated. The videos “provide instructions, play highlight reels, feature the player of the week on Fariqak, and suggest a lineup for the coming week.” He hopes they will help Fariqak “build a culture” among fans. He also plans to localize Fariqak to include Jordanian and Egyptian leagues.

Other than Ace Roster, Fariqak also has two other projects in the pipeline, Jabari says. One of these is QuickPix, a fantasy football World Cup edition with freemium or buy-in models, in which paying customers can compete for electronics.

With Arabic language capability, localization, and community-building tools, Fariqak will stand out. But Ace Roster, Jabari’s global product, will enter a crowded market. Jabari intends to differentiate the product with the same approach that he’s taking in the Arab world: going very local. “The fact that you can play across multiple leagues is something not on offer on any of the other sites I have seen,” Jabari explains. “Potentially in the future we can start to add leagues similarly to the addition of Egyptian and Jordanian leagues. For example we might add Major League Soccer [the American soccer league], which is not covered in a lot of fantasy football leagues.”

There will be plenty of room in the market, he argues. “The way we look at it,” the entrepreneur concludes, “is that this is the most popular sport in the world. Just as you have multiple search engines, like Google, Yahoo!, Ask.com, etc. that all have their users for some reason or another, so too will you have people who favor Ace Roster over others.”