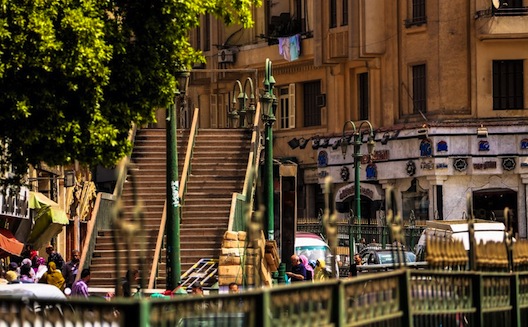 When it comes to start-ups, entrepreneurs face unique challenges in an already difficult economic environment: striking out on their own and sustaining business through the early stages, finding clients willing to buy their product, and finding investors ready to bet on their business.

But what strategic role do entrepreneurs have to play in rebuilding Egypt?

While entrepreneurship is not an immediate cure-all and is not the focus of the transitional government’s action plan, it will be a key catalyst in Egypt’s economic growth over time.

“In the short term, it’s not going to have a huge impact on GDP,” said Steven Haley, general manager of MC Egypt, a for-profit subsidiary of Mercy Corps. “But over the long term it will have a profound effect on the economy.”

Global studies also show that not all entrepreneurs have the same impact on economic growth in emerging countries, as not all of them work in the same industries.

According to one study on the relationships between entrepreneurship and the economic growth of emerging markets, “due to the often challenging entrepreneurial environment with regard to levels of development and institutional context, the number of small-scale, informal, self-employed, and often unproductive entrepreneurs outweigh the number of productive, innovative, opportunity-driven entrepreneurs.”

To have the impact on economy, it is not enough to meet a quota of new businesses launched. What makes a difference is having an economic environment that fosters innovation and business growth.

By 2012, 85 percent of Egyptian adults viewed entrepreneurship is a desired career choice and 42 percent expressed their intentions to start a business in the future, according to Global Entrepreneurship Monitor.

Since then, analysts and development workers have seen a shift in the quality and also the range of industries among emerging start-ups.

“We’ve seen tremendous improvement in quality of startups over last three years,” Haley noted. In addition to this, there’s been an increase in the sheer number and nature of startups. “You are starting to see more start-ups focusing on more sectors.”

The latest cycle of Flat6Labs accelerator noticeably expanded beyond its past focus solely on the IT sector, to include fashion, agriculture, and food industries.

As the entrepreneurial ecosystem matures and develops, there is an increasing need for investor capital and strategic governmental support through infrastructural and legislative reforms.

Most view the government’s role in establishing a legislative framework and then getting out of the way.

“They have to make it easier and cheaper to start companies.” said Angus Blair, president of Cairo-based think tank Signet Institute, noting bureaucracy remains the biggest challenge to entrepreneurship in Egypt.

For entrepreneurs on the ground, the other major challenge is availability of capital.

“More people are joining the ecosystem, but the output is not there yet, in terms of job creation,” said Karim El Mansi, cofounder and CEO of Cairo-based car-sharing service Pie Ride. “What is missing is capital, having more money in the system – no amount of mentorship will help people without investors.”

In the meantime, industry insiders are taking military strongman and presidential frontrunner Abdel Fattah El Sisi’s advice, that patience and altruism are necessary to rebuild Egypt, and waiting for the entrepreneurship environment to evolve.

“We have to be patient for 5-10 years to see it really explode,” Haley said.