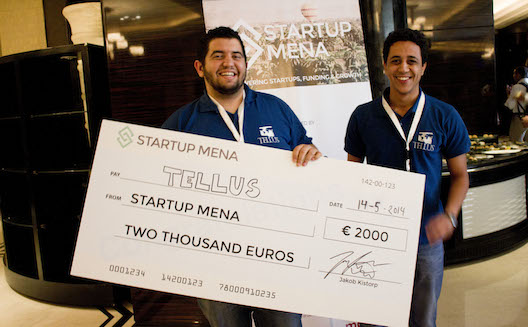 Startup MENA aimed to revive European interest in Egyptian startups by hosting its inaugural Investor Lounge event in Cairo earlier this month, aimed at startups ready for Series A funding.

Startup MENA selected ten finalists from 130 applications, in an attempt to showcase what Egyptian and MENA startups can currently offer.

“The current political situation [in Egypt] is of course a hindrance,” said Jakob Kistorp, founding partner of Venturescout and a co-founder of Startup MENA. “The fact we got Hoxton Ventures and Point Nine Capital to come here is huge.”

Tellus, a texting customer service mobile platform, was selected a winner of the event following pitches from the selected teams and a series of mentoring sessions.

The startup received a €2,000 prize and feedback from a panel of investors and mentors.

The idea behind the event was to showcase a selection of MENA startups before a panel of regional and European investors including Hoxton Ventures and Point Nine Capital. The diverse range of startups selected and the fast-paced, tightly focused format of the event won praise from many participants, investors and startups alike.

A boost for winning startup Tellus

“Tellus shows great potential and they are solving a real problem by creating value not only for the businesses, but also for the consumers,” said Kistorp, who hosted the event.

The messenger application allows users to text requests instead of calling, streamlining the ordering process and allowing users to share their experience with their friends.

While the service has not launched, Tellus said it has recruited around 30 early adapters willing to test the product post-launch.

“Customer service has always been a hassle for everyone, and we aim to make it easier,” Nagy said. “We plan to spend the €2,000 on marketing and developing the app.”

“Messaging is becoming so important now especially after the WhatsApp deal,” said Medhat Karam, business development director at OT Ventures and a member of the judging panel. “So if you can create this support app where all services are hooked to it, I think you bring a lot of value.”

For Karim Samakie, an investment associate at Oasis 500, scalability, innovation, and ease of integration with current systems also contribute to the appeal of Tellus.

While the prize is a welcome vote of confidence for Tellus, the startup faces many challenges in testing the product.

“Tellus was selected because the product is highly scalable and this is now their biggest challenge – executing and scaling their product,” Kistorp noted.

Speaking to Wamda on the sidelines of the event, Kistorp noted that interest among European investors is growing. “We have go-aheads from six investors that are interested in coming for the next one,” he said. “The next one is going to be a lot bigger with more VCs coming in.”