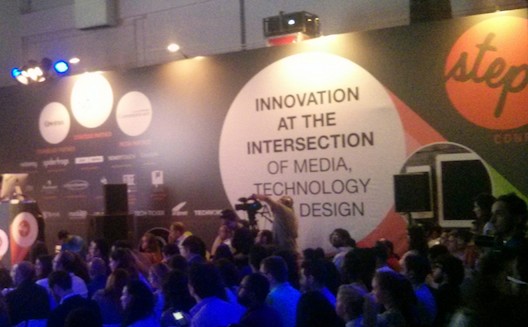 For the third round of the annual STEP Conference, held April 30th in Al Serkal Avenue in Dubai, organizers chose the topic of Innovation at the Intersection of Media, Technology, and Design.

STEP founder, Ray Dargham, doesn’t believe the topic was selected randomly. “Everyone is confused nowadays and trying to determine the identity of their business, choosing between technology, media, and design, whereas really the three are interrelated pillars that the innovation process combines,” says Dargham, who sees innovation as “a way of living and of looking at things from different perspectives.”

Dargham wanted this event to be a platform for the change needed in the region. For him, STEP seeks to “change the status quo and to develop new ways to communicate without copying the West, by customizing means in a manner that suits the region.”

For many of the attendees (700 people compared to 200 last year), the event was successful: it gathered many key players in the Arab ecosystem including entrepreneurs, startups, small and large marketing and advertising agencies, venture capital investors, incubators, and accelerators. STEP was the perfect opportunity for many to network and to hear about the changes that have taken place in the innovation process thanks to technology.

Panelists discussed a variety of topics on the main stage, from demos of wearable technology such as Instabeat, 3D step counter Mymo from Tupelo, and 3D glasses from Atheer Labs, to the world of sharing economies, down to retail technologies, innovation in marketing, and agencies entering the digital world. The audience was enthusiastic; there was standing room only available for most of the presentation.

There is no doubt that the digital revolution has changed marketing and advertising, forcing many agencies to adapt to new technologies. Gavin Payne from global marketing agency JWT said “innovation is a word that we are overusing these days… there is a fundamental difference between innovative people and an innovation strategy.” He especially stressed the idea that real innovation for him is a series of “successful failures.”

Traditional large companies such as JWT and Leo Burnett MENA have had to get on the digital revolution train and to change their strategies. Payne says that large agencies have made this leap possible by acquiring small digital agencies to benefit from their skills “either by merging these small agencies with their conventional departments or by assigning them digital campaigns, which is what Leo Burnett did when it acquired digital marketing agency Flip.”

According to Yousef Tuqan, Creative Director at Leo Burnett MENA and former CEO of Flip, the agency would like to develop its digital skills and has a lot of work to do in that sense. Tuqan believes that the problem facing conventional agencies is that “they are still not well versed at digital campaigns and should adapt as well to mobile and social media campaigns.”

This idea was affirmed by Jad Hindy, founder and CEO of digital marketing agency Netizency, who told us that “it is hard for conventional agencies to create digital campaigns because they… were built to operate in a specific manner which is now embedded in their DNA. These companies have big accounts as well as many employees and branches; however, they need a lot of time to change.” Hindy sees digital marketing agencies as bridging the gap between conventional communication and the next generation of communication – and doesn’t mean just Facebook and Twitter. Rather, “I am talking about integrating all marketing channels together. I don’t use the term ‘integration’ anymore because of its misuse, because real integration is to rely on mobile.”

So what are the pillars of success of digital marketing?

1. Radical change in marketing campaigns. For Payne, we we are going through a transitional phase from “a campaign-based digital approach to a product-based digital approach,” and the Arab region is no exception to this rule. Payne asserted that campaigns will continue to play an important role in the marketing and advertising sector, but companies will head towards thinking more about the product, such as by “creating a Ramadan app that users can continue to use even after the end of the month of Ramadan.”

Hindy, for his part, stressed the idea that digital marketing isn’t just about creating websites, but is rather “marketing that has gone digital.” He said that any entrepreneur who would like to go into the digital marketing sector should understand all the secrets of the trade and not only be a coder. For him, “if you’re not good at creating conventional marketing campaigns, you will never succeed in launching a digital one.”

2. Skills. Finding the right skilled employees remains the biggest challenge in the region. Tuqan told us that “in the region, you can find people who are very good digital wise and others who are good at marketing or advertising. But it is very hard to find someone who masters both.” To combat this, Leo Burnett has adopted a new recruitment approach: any new employee should be proficient in the digital field. As for the employees already working at the agency, next month he will launch an overall training program to equip staff with skills, trends, topics, and terminology used in digital marketing and advertising campaigns.

3. The Idea. Despite all the changes in marketing campaigns, the idea remains the most important factor. Tuqan believes that “regardless of the tools and attention on social media, the most important thing is to come up with a compelling storyline that attracts the attention of people or gets them to participate.” He is confident that if you want to build a brand or a strong relationship with your customers, it is not just about “going digital, but also about focusing on the content.”

4. Building trust. The customer is king for every successful advertising or marketing firm. For Hindy, the most important thing is to educate the customer to make them understand and choose between the new tools available for digital marketing campaigns. Payne sees that the most important thing is to “build a partnership and a trust relationship with the customer… It requires a lot of time to build a relationship with customers and to get them to embrace change with you and become interested in product-based campaigns,” he says, but it’s worth the effort.

In the end, the STEP 2014 event was an opportunity to exchange ideas, knowledge, and skills. It wasn’t limited to side talks and panel discussions alone, but also offered participants a number of workshops that revolved around several topics including the obstacles facing creativity and innovation, and turning startups into brands.