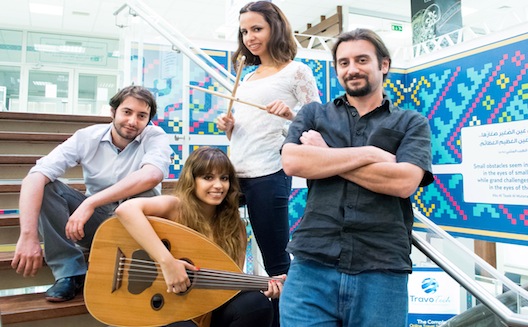 Between positive revenue growth in Jordan, a new partnership with Liwwa, and a victory at Seedstars World Amman, Nur Alfayez and Fahed Farraj, cofounders of online musical instrument shop Feesheh, are two happy musicians. With so much momentum, it seems a natural next step to expand operations into the UAE.

Farraj, who leads operations as Feesheh’s COO, shares his motivation behind the move: "We have tested our pilot model in Jordan for the past two years and now we are ready to target a bigger market. Not only does the UAE promise Feesheh more consumers, but it will probably be the future headquarters of Feesheh. In a press release, Farraj reveals: “…we aim for Dubai to eventually become the hub for our expansion to the whole region.”

While geographic expansion is the next big move for Feesheh, it isn’t the only change on the horizon. CEO Nur Alfayez says: "our goal is not just to sell instruments. The name Feesheh means plug, so what we’ve always really wanted to do is better connect people to music.” According to Alfayez, half of the equation is making instruments more accessible and affordable. The other half is educating the Arab world on how to collect and play instruments. In the near future, however, Alfayez sees Feesheh as "the ultimate one-stop shop for music discussions, teachers, students, merchandise, or anything related to music in the Arab world.” From the co-founder’s point of view, this is a serious need that isn’t currently being met in the region.

Other regional music education initiatives have recently been getting attention from Silicon Valley and international support organizations. After a stint at Oasis500 in Amman, online music school i3zif was selected to participate in a 500 Startups boot camp in Silicon Valley. Since then, the i3zif team has launched an ambitious program that brings instruments and music lessons to Jordanian public schools through video tutorials (Wamda covered this story in more depth earlier this year).

Feesheh’s recent victory at Seedstars World Amman will be taking them to Switzerland in February 2015. Winning the Amman event means they will represent both their country and startup as they pitch to a panel of European investors. When asked how she felt about the competition and all of the recent publicity, Alfayez said, “It has always been hard to show our potential because we’re in a niche business. After two years of hard work, people are finally starting to notice that we’re going somewhere.”

And people are definitely noticing. Feesheh has recently caught the attention of several international investors, including Oasis500, angel investors in the GCC, and the Silicon Oasis Founders, owned by Dubai Silicon Oasis Authority.