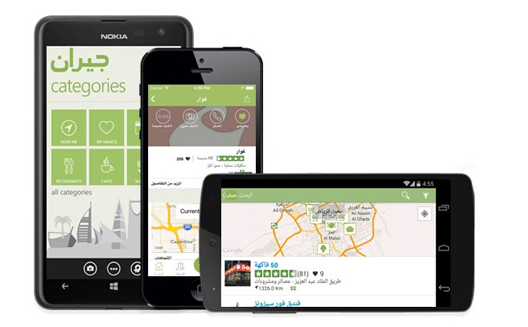 It’s been a while since Wamda has written about pioneering Jordanian user review platform Jeeran, but it doesn’t mean that the startup has been idle. This key player in Jordan has made its way to Saudi Arabia with success, and is also now offering a dedicated platform in Abu Dhabi, Dubai, Sharjah, Kuwait, Doha, and Cairo.

The 14 year-old company, which is part of Endeavor’s network and in 2011 received investment from Silicon Valley accelerator 500 Startups has just launched a Windows mobile app in partnership with Nokia.

Continuing in the tradition of its ever-changing services – the site morphed from a blogging service in 2000 to a user review platform in 2011 – the startup launched an iPhone app in September 2011, and an Android version in April 2012; both versions have been downloaded to around 800,000 devices. It has taken two years for the startup to tackle the Windows Phone market.

Jeeran’s product designer Romouz Sadeq believes Lumia smart phones to be very practical and nice; they face issues, however, regarding app availability. “Nokia is continuously evaluating the local market for the apps that their audience needs,” he says. “Jeeran was selected [for a partnership with the phone manufacturer]... it made sense for us to work together to bring Jeeran to Nokia phones.”

This is not the first time that the phone manufacturer, bought this year by Microsoft, has made partnerships with startups. Aware that “local relevance is key to a consumer’s overall mobile experience,” the multinational is trying to solve that shortage in apps by “bringing the latest local apps and services to Windows Phone,” says Praveen Prabhakaran, Head of Developer Experience for the Middle East & North Africa.

The app enables users to search for places (restaurants, ATMs and even doctors), browse pictures, read reviews, and get details, as well as write reviews. A recently added feature also allows users to ‘like’ a place on Jeeran and save it to their profiles.