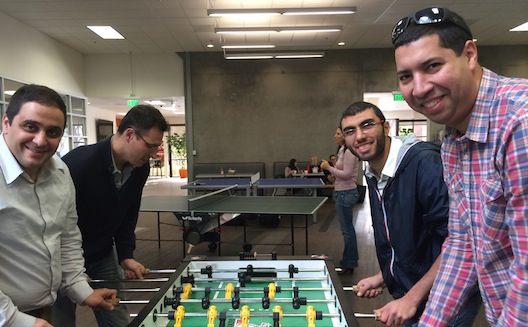 Despite his success, Taoufik El Jamali is largely unknown in Morocco; too bad, given that his business wins could serve as inspirations for many of his North African peers. In just five years, the entrepreneur was able to grow and sell his businesses Unyk to Viadeo, and helped sell Netclub to Match.com, the number one professional social network in French-speaking countries and in China.

Today, he is the co-founder of Viral Ninja, a viral customer acquisition platform based in Montreal with a team of North American, French, and North African talents that recently became Sociable Labs after a merger  (pictured above at LinkedIn’s headquarters, from left to right, CTO Mehdi Mehni, Senior Product Manager, Cédric Poirier, Senior Software Engineer at LinkedIn Muhieddine El Kaissi, and COO Taoufik El Jamali)

Here he reflects on his journey and give us tips for a successful exit.

After earning a bachelor's degree in aeronautics at a university in Moscow and working for three years in engineering in Morocco, Taoufik moved to Montreal in 2002 to pursue his master’s studies in e-business and delve into what was then called NICT, New Information and Communication Technologies.

There, he met Sebastien Brault, a Québécois working on his third startup: an early dating website launched in France and Québec, called Netclub.com. Together, they sought to create a website that could help drive traffic to Sebastien’s website. In 2004, they created Unyk.com, a smart address book that groups all contacts in a single address book and automatically updates the information of those contacts.

“We spent zero dollars on marketing, and one month after the launch, we had 30,000 registering every day,” the entrepreneur said. This is a success he attributed to the viral nature of the product; you had to invite contacts so their information would be updated automatically, and a lot of time spent on ensuring the sharing process will be seamless. That the app was online in English, French, and Spanish from the beginning also helped get people sharing.

For three years, the two entrepreneurs worked on both startups. That changed in 2007, when they realized Unyk was the startup with the more potential, selling NetClub, with its four million users, to Match.com who was focusing on expansion to francophone markets, This allowed in turn for Sebastien and Taoufik to focus their human and financial resources on Unyk.

Shortly thereafter, Unyk reached 10 million users. Inspired by the success of LinkedIn and Viadeo, the team developed a strategy to turn the address book into a professional social network whose added value would be the synchronization of contacts with one’s address book. And so they began raising a $15 million round.

When the 2008 crisis hit, investments were frozen and the fundraising round got interrupted, so it offered Viadeo the option to buy. Upon the purchase in 2009, Unyk had 20 million users, mostly in Europe and Latin America, in eight languages. While the buyout saved the company and the team’s work, it left Taoufik with a bitter taste in his mouth. "We had two exits, that's good, but we are very ambitious. This is not what we wanted for Unyk. There were many things we wanted to do, but we could not,” he noted.

The key to a successful exit: the network

So what did they do to achieve success with these two exits? Taoufik shares his advice with Wamda.

Unyk and Viadeo met for the first time two years before the sale. Unyk, realizing that Viadeo lacked a social graph and user recommendations, had contacted the social network to suggest a partnership. It was only after the failure of the fundraising round that they began to discuss a sale. Taoufik explains: “The networking is part of doing business. But it is not only about knowing a lot of people. You must also share your vision.”

While El Jamali says you must share your vision to receive feedback from people and raise the interest of potential buyers, he admits that before moving to Silicon Valley, he himself was afraid to share his vision, for fear it would be stolen. “When I arrived in Silicon Valley, I changed my mind. I was no longer afraid to talk about my vision, because the most important part is not the vision, but its implementation,” he said.

The entrepreneur stresses that startup founders should understand which companies are likely to buy theirs are looking for. You must watch the market to align your product with the trends.

To ensure that key members of the team stay in their jobs once the sale becomes official, you should integrate them into the decision and explain to them the challenges ahead.

The Viral Ninja team, the project that Sebastien and El Jamali launched after selling their startup, comprises North Africans and French nationals, due to chance (there are a lot of people from that part of the world in Quebec) as well as connections (El Jamali’s brother was hired as a senior developer). El Jamali also reports a desire to integrate the North African community in North America looking to pursue careers in the web sector.

“Right from the beginning, I wanted to help people from immigrant communities. When I see potential in people, I work with them. When one crosses 7,000 kilometers to emigrate, it means they really want to change things,” the entrepreneur explained. He added that North Africans are very good at what they do but don’t know how to communicate their successes, whether to their supervisors or when dealing with recruiters.

The entrepreneur, who is in close communication with young North African entrepreneurs, explained that for those planning to launch a startup in their home country, there is a problem of motivation: “You cannot just try. You must be sure and give it 100%. If you do not give it 100%, you will surrender at the first problem you encounter."