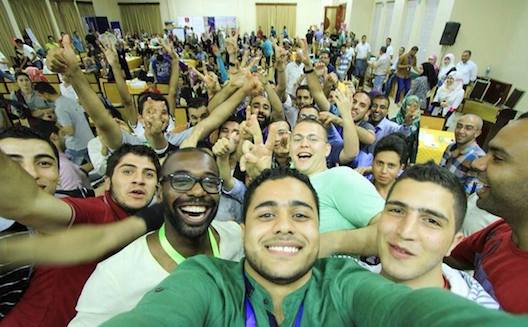 Attending Gaza’s fourth Startup Weekend was one of the best experiences I’ve had in the Arab startup ecosystem. Some of the most talented, enthusiastic, and hungry entrepreneurs are popping up in the isolated strip where daily struggles are overcome through creativity and collaboration.

With a total population of around 1.7 million in Gaza, the startup scene is relatively small, but you would never know it from the frenzy surrounding mentorship and tech education events there. Just a few months ago, many Startup Weekend participants had no idea what a startup was. But thanks to programs like Mercy Corps accelerator Gaza Sky Geeks, Google Developers Group in Gaza, and others, buzz is building around entrepreneurship. This year’s SW Gaza drew over 650 applicants; over 150 were ultimately selected to participate.

Kicking off the fourth and largest Startup Weekend Gaza, our group of eight international mentors from Copenhagen to Dubai and Poznan to Portland joined the local ecosystem at the first Meet the Gazans event where we each shared a tidbit of expertise with the packed room of local innovators and business stakeholders. Presentations ranged from UX design to lean startup methodology, and VC investment to the power of emotion in your startup. 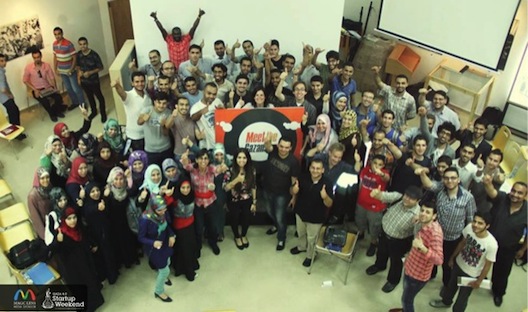 Later that evening, local leaders gave us a warm welcome, including the president and vice president of the Islamic University of Gaza who are pulling together support programs and educational specialties to support entrepreneurship in the Gaza Strip.

On the morning of the big day, we each met with some of the more advanced startup entrepreneurs to workshop their major challenges one on one before SW Gaza began.

Startup Weekend itself kicked off late in the afternoon, organized by the team led by Iliana Montauk at Gaza Sky Geeks, Mohammed AlAfranji of SADAF for Technology, the Google Developers Group in Gaza, and the Business Technology Incubator (BTI) of the Islamic University in Gaza (IUG).

More than 150 participants and 50 partners and attendees packed into the Roots Hotel Seaside to share startup pitches and form teams around the top ideas. Over 70 participants made their way to the stage to offer a one-minute pitch, many having prepared their ideas for weeks before sharing them with the group.

With so many ideas to choose from, the participants and mentors took about half an hour to vote for their favorite concepts, running around to pin voting stickers and show their support for their favorite ideas. As the selection panel reviewed the results, participants ate dinner anxiously, hoping their idea received enough votes to advance. One table I sat with was filled with a team of friends hoping to build a social media account auction site. When their name was called, each jumped up and ran around hugging each other, excited to build their concept over the next two days.

In the end, 25 ideas were selected (16 led by women) and teams began to form. SW Gaza was officially underway.

Although we unexpectedly had to leave before the second day began, many of the teams continued to reach out online for mentorship and advice throughout the second day. The international judges panel joined local judges via Skype on the third day to select the winners of SW Gaza 4:

This year, attendees also had several new categories to compete in, including: Best Women’s Team, Best B2B Product, and Best Validation. Here’s a look at the winners in these categories:

If previous SW Gaza winners like Wasselni are any hint, we’re in for some great iteration and growth from these startups. We’ll keep an eye on these teams as they further validate their ideas and begin building viable companies.

Check back for part two from my trip to Gaza for a broader overview of the Gazan startup ecosystem.