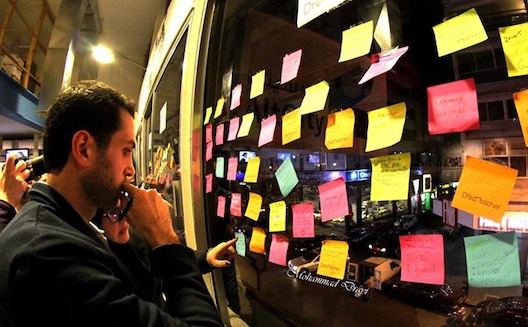 At one of AltCity's seemingly ubiquitous events, participants collaborate on a project. (Image via Facebook)

As he sits with his beat-up laptop and notebook phone, David Munir Nabti could easily pass for one of the customers working at the AltCity cafe. So unassuming is his stance that a newcomer to the first floor space on West Beirut’s Hamra Street would have no clue that this is one of the guys who brought Lebanon one of its first ever co-working space for entrepreneurs and startups.

“The spectrum on which people engage is huge,” Nabti tells Wamda. “The cafe wasn’t by accident.” Serving standard international salad-and-sandwich fare, the team opened the cafe in 2013, obviously as a revenue stream for the space, but, also, as Nabti stresses, for people to discuss ideas, and make discoveries here; not everyone was born to be in an office.

Since AltCity opened its doors in 2011, a lot has changed. Guiding the ship through Beirut’s rough entrepreneurial waters as Chief Entrepreneur and Organizer is a far cry from Nabti’s California beginnings. Or is it?

“I’ve been interested in tech stuff” since high school, he says. His first job after graduating with a political science and international economics degree from the University of California, Berkeley was a stint at Stanford, working in the graduate journalism program, while also working as a policy compliance analyst at Google. His LinkedIn profile characterizes this period as “an interesting time doing mind-numbing work,” but he is quick to add that the tech company was very inspiring. 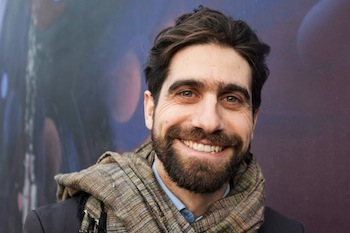 When he finally decided to make the trip overseas he got himself to Syria working for the UN’s Food and Agriculture Organization, while simultaneously earning another bachelor’s degree, this time in Middle East Studies at the American University of Beirut. “I felt restless in California,” says Nabti. “When I studied I focused on political and economic transitions and I wanted to live in a transitioning country.”

Lebanon was a perfect choice. He had family with whom he wanted to spend more time, and Beirut was his idea of a perfect environment in which to apply his interests in tech, media, art, entrepreneurship, and policy. “There are some great things going on in Lebanon in terms of building a stronger startup scene, with a lot of energy from many good groups, improving support from the government and a growing startup community,” he says, by way of explaining why Lebanon seemed promising. “I wanted to help foster and catalyze positive and sustainable transitions. This is all still, obviously, very much a work in progress.”

A first for Lebanon

“One of the key things we really wanted to do was bring the vibrancy and dynamism of Silicon Valley to places that really needed it,” says Nabti; things like “media, tech, and creativity to post-conflict and developing countries. We didn’t plan on shared spaces or startup accelerators, but that’s what happened.” Having determined what Nabti terms as ‘soft’ and ‘hard’ needs for those starting out in business, he and his collaborators realized that a shared collaborative space was what was proto-entrepreneurs in Lebanon needed most.

In 2007, Nabti was able to put his name to his first co-working operation. Along with a group of friends, he took a space in the Saifi district, near the port of Beirut, creating a ‘community space for innovation, incubation and sustainable social and economic development’. It was called RootSpace. “We learned a lot. We knew it was a starting place for us,” he says. “It was maybe the first space in Lebanon of its kind.” 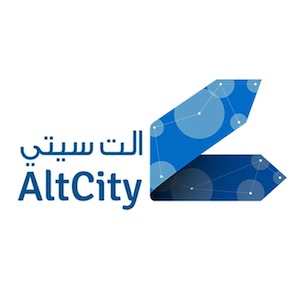 They became fully immersed in the entrepreneur scene and over the course of three years RootSpace got to a point where it needed to expand and change location. Saifi didn’t exactly lend itself to walk in traffic, plus, they wanted to shift from a non-profit business model and move to a model that would make scaling easier. “A key lesson was that economies of scale matter, especially in Lebanon where dealing with basic infrastructure is already difficult,” he says. AltCity was born.

Nabti believes that to date the core AltCity team – Nabti and co-founders Samer Azar and Dima Saber – have seen about 10,000 people pass through their doors and hosted 800 events. The projects have been challenging and given the situation in the region, things have probably not progressed as quickly as they might have in Europe or the U.S. But none of this stops him from being excited about his work, for instance, the work the AltCity team is doing with Lebanon’s Central Bank. “It’s a startup boot camp program,” says Nabti. The goal is to develop a program that will provide support to 100 startups over the course of a year, up to early stage financing, which, Nabti believes, will lead to about a third being launched proper.

As Nabti talks about the work that AltCity does, one of the most common words he uses is ‘creativity’. “I would consider myself a mix of creative and business,” he says. “Someone said: ‘I can be a creator and manager, but not on the same day’ and that would be me.” That said, Nabti is a massive multitasker. He says that all entrepreneurs start out as multitaskers in order to get things done, but it seem that even four years into AltCity he’s only just learning to sit back a little. It’s been a long time since the guy took a holiday; he’s been making an effort over the past six months to spend more time away from his laptop and with friends and family.

“A lot of people think it’s strange I voluntarily left California,” says Nabti. But this mentality is part of what he is working toward changing – the idea that it’s odd for anyone to want to come to Lebanon and work on a startup. “Hopefully Lebanon can become a hub for entrepreneurs and startups in the Middle East, all ready to compete on a global scale.”

Check back later this month for a profile on AltCity’s business model, operations, and plans to scale.