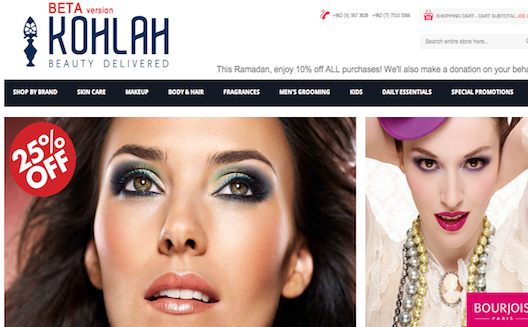 While Faisal Hakki was working at the Jordanian VC firm Accelerator Technology Holdings, where he screened, evaluated, and helped select investment opportunities, he began to notice the boom in the region’s e-commerce industry. Eager to launch of startup of his own, Hakki began to look at various commercial industries, isolating the ones with particular sets of problems or which had not yet been properly catered to in the region.

After looking at several industries such as travel and hospitality, pharmaceuticals, entertainment, and toys, Hakki settled on cosmetics and beauty products.

“What caught my attention about cosmetics is that it’s a really big market. It’s around $15 billion USD every year in the region and it’s growing at double-digit growth rates, mostly in the Gulf states,” says the entrepreneur.

Kohlah, Hakki’s resulting venture, is aimed at becoming the premier online cosmetic and beauty products destination in the Arab world. The beta site launched in January, and while Hakki declined to go into specifics, he says that sales have been steadily picking up, with a 50-60% increase in May alone.

Kohlah – Arabic slang for kohl, formal Arabic for traditional oriental eyeliner made from charcoal – is a straightforward e-commerce platform, currently servicing the Jordanian market, which offers a diverse selection of mid-range to high-end cosmetics, perfumes, and skincare products. It also offers a selection of mass consumer self-care and well-being products that are usually found in supermarkets and pharmacies.

Aside from being a $15 billion market in the region, the beauty products industry is effectively immune to fluctuations in the economy, as illustrated by the famous lipstick effect. According to the theory, in times of economic downturn people will continue to buy luxury goods, albeit of lesser value than vacation homes and sports cars, luxury goods such as perfume or lipstick. At the same time, Hakki pointed out that beauty products have become everyday goods, so people will purchase them even if times are tough.

While there isn't yet "one massive brand" covering the beauty industry in the Arab world, there is some competition. Regional e-commerce sites such as Souq.com sell cosmetics as one of many offerings, and there are also several small, country-specific sites that sell cosmetics. Another competitor might be GlamBox, a startup based on a subscription model that has proved massively popular in the US. The Dubai-based startup raised $1.36 million USD last autumn to expand into Saudi Arabia.

A major factor in the lack of cosmetics e-commerce platforms in the Arab world is the significant red tape faced by companies which ship liquids, which make up a huge percentage of cosmetics products, via air. Even international brands such as Neiman Marcus, Sephora, and Strawberry.net can’t ship liquids outside of the US, Europe, and Asia, where they have localized warehouses, explained Hakki.

To sidestep this red tape, Hakki began working with local Jordanian suppliers to secure his goods, because they have “already gone through that headache, they’ve already imported the goods.”

Here’s how it works: Kohlah blocks a certain amount of inventory at the local suppliers’ (the importers) warehouses for a certain period of time, and then a shipping service (Netco for orders placed outside of Amman, or Hakki’s brother and Kohlah Head of Operations, Hashem, for orders within the capital) picks the goods up at the warehouse and delivers them (for free) to the purchaser. Delivery is only available for now within Jordan.

Currently, inventory is monitored and updated on the site via biweekly reports from the local supplier, but Hakki plans on implementing a live link between the suppliers’ warehouse inventory and the backend of the Kohlah website.

Because it works with local suppliers, Kohlah doesn’t enjoy much latitude with its prices, which are just under the market value. However, while customers may not save a ton of money by purchasing their products from Kohlah, they will enjoy significant convenience, as products ordered by about 1 PM will typically be delivered on the same day. The quick turnaround time on delivery also reduces the likelihood of customers choosing the return rather than pay for the items that they may have purchased impulsively (credit card payment is available but COD makes up the majority of transactions on the site).

Hakki plans to take Kohlah to Dubai, where he already has supplier contacts, by September/October of this year, followed by the rest of the UAE. He then plans to open up shop in Saudi Arabia by the beginning of 2015, followed by Egypt, followed by the rest of the GCC states. The prohibition of shipping liquids via courier means that Kohlah will have to establish similar relationships with local suppliers in each country as it expands, which may present challenges.

Kohlah, which has thus far been self-funded, has enough cash to make the move to Dubai, but will look to raise capital for its expansion into the other markets. The two-man Kohlah team will seek to raise $1.5 to 2 million USD in its first round of fundraising because, as Hakki noted, “e-commerce is very cheap to start, but very expensive to grow.”

While this expansion timeline may seem ambitious, Hakki is very grounded in his expectations. “This is a long-haul thing. It won’t happen in a year or two. I expect it to basically become a sizeable, nice, juicy business in like seven years. And I’m fine with that.”

He is also focused on the aspects of his company that really matter in order for it to succeed. “Intrinsically you have to have a really solid business, a nice looking income statement, a solid balance sheet, nothing that you’re ashamed of financially, nothing that you need to cover up with passion and say ‘I’ll get to that later on.’”

“I truly believe that you need to be very patient on growth but very impatient on profitability. So take your time scaling up the business but make sure that it’s a healthy business first.”