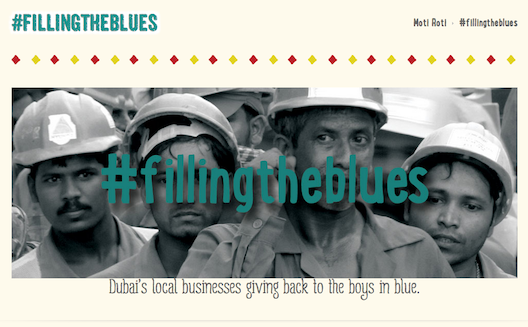 In the UAE and MENA region, Ramadan is usually a slow month for most startups. But for charitable causes, Ramadan is an ideal time for cause marketing due to a heightened emphasis on giving back.

Cause marketing has become common practice for established brands and startups alike, particularly in today’s collaborative economy. Cause marketing entails collaboration between two or more parties to achieve mutual goals together. These goals can include raising funds and awareness for a charitable cause while simultaneously creating brand awareness. A well-executed campaign also builds a sense of identity among followers through shared values.

In recent years, because Ramadan has taken place during the summer, many startups close shop and go on vacation. This year, however, three startups in Dubai have decided that every day counts and that Ramadan is an opportunity to continue growing and to “do well by doing good”. CarpoolArabia.com, Melltoo Marketplace (of which I am a co-founder), and Moti Roti are three local startups that have launched innovative cause marketing campaigns this month.

Cause marketing and the collaborative economy

Having risen out of the recent economic slump, the collaborative economy is where people share their personal resources to create a more sustainable future. A number of wildly successful startups are based on this idea, including AirBnB, Uber, and Task Rabbit. Cause marketing fits nicely with the values of this new economy. At the heart of each campaign is collaboration, and collaboration can be achieved in many ways as each of our startups demonstrates.

CarpoolArabia.com encourages collaboration among its users by connecting drivers with empty seats with passengers looking for a ride. Drivers have the option to ask for financial compensation or request that passengers cover part of the cost of the ride. The #RamadanPoolers campaign encourages drivers to offer free rides in the spirit of sharing and meeting new people during the month of Ramadan. Guillaume Arnaud, co-founder of Carpool Arabia, explains why the startup was keen on the #RamadanPoolers campaign: “We believe that the world would be a better place if people shared more. Our users have these same values so we wanted to give them the opportunity to do something for the community.”

Similarly, my startup Melltoo.com is a marketplace where people can resell their pre-owned items. Melltoo is a social network for buying and selling, comparable to Facebook for classifieds. For the #halfAdate campaign, collaboration is between the startup and its users. Users contribute “half a date” by posting an item of theirs for sale on the Melltoo mobile app. Melltoo then contributes the other “half a date” by donating 5 AED for each ad posted. The funds will go to Human Appeal International for their Ramadan Iftar program.

As co-founder Morrad Irsane puts it: “I was looking at my budget to see what I could use for charitable causes. I can’t cut salaries or rent, but I saw that there is an amount going to Facebook and Google for advertising. I would much rather give this money to charity.” The idea is that doing good is not only about giving money. Melltoo makes it possible for its users, who might not have money to donate, to support a charitable cause while simultaneously embracing sustainability and the collaborative economy.

Finally, MotiRoti.me is a chain of “pop-up shops” serving light, gourmet curries to people on the go. The #FillingTheBlues campaign is a collaboration among Dubai’s F&B businesses to provide Iftar every night to 100+ laborers working late shifts during Ramadan at an active construction site next to the Rotana Hotel at Dubai Media City. Each night, workers are treated to something different. Founder Tahir Shah professes: “A lot of us moved here for a better standard of living. However, the shiny malls, beautiful apartments, and parks that we enjoy come at the cost of the standards of living of the workers who built them. I wanted for this campaign to be a gesture to say we know you’re there; and for these workers to feel that their sacrifice is not in vain.” Tahir recognizes that all businesses have spheres of influence and resources that can be leveraged for a social cause.

Cause marketing should be win-win for both the startup and the cause. Startups should go into the campaign with a clear idea of what they hope to achieve on the marketing front as well as what they hope to achieve for the cause. With this in mind, they should define the metrics they’ll use to measure their success and apply these all throughout the campaign, continually adjusting according to the results.

Melltoo wants to show that even simple actions can make a difference. As Morrad says: “Part of sustainability is also helping the less fortunate that live with us and among us.” To date, Melltoo has had over 70K timeline views on Twitter and a 60% week on week increase in the number of ads posted on the app.

Moti Roti has an even more ambitious goal for #FillingTheBlues, as Tahir tells us: “I want this to be a way for us startups and homegrowns to connect and to demonstrate that collaboration is more powerful than competition.” Within the first three days of launching the campaign, the entire donation calendar was booked, with at least one restaurant or donor pledging food for 100+ people every night for the month of Ramadan.