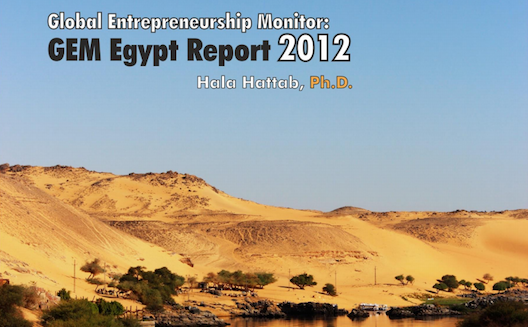 In Egypt since the January 2011 uprising, there has been no shortage of events, meetups, conferences, and pitch sessions aimed at fostering entrepreneurship.

And yet for many, the efforts appear disjointed – a cacophony of redundant initiatives that often fall short of addressing fundamental challenges that hold entrepreneurship back in Egypt.

Countering this problem in a more systematic way, with a wider range of actors on board, was the original idea behind a forum last week, coinciding with the print publication and official launch of the GEM report on entrepreneurship in Egypt.

The event was held at the Greek Campus of the American University in Cairo, and sponsored by Silatech and Canada’s development agency IDRC.

First published online in December 2013, it was the first report that captured the impact of January 2011 uprising on entrepreneurship.

While the research was conducted in 2012, its key findings remain relevant today according to the author of the report Hala Hattab, a researcher with the British University in Cairo.

The extensive research and the range of actors present is what set the event apart: international agencies, government representatives, USAID, entrepreneurs, educators, banks and NGOs were in attendance.

From many participants, there was a push and readiness for a more constructive dialogue.

“We have the means and interest,” said Hattab. “We are aiming to create a new platform for discussion groups, how we can improve entrepreneurship environment.”

Reflecting the main findings of the report, the event focused on three main challenges entrepreneurs face in Egypt: financing, education, and the shortcomings of the ecosystem itself.

For educators, there is a need to foster entrepreneurship on a more fundamental scale at schools and universities in Egypt.

Egypt received the lowest ranking among 69 countries surveyed in entrepreneurship education and training, according to the GEM report.

“We need to change the way young people think, learn new skills, [and embrace] change,” said David Kirby, a professor at the British University in Cairo. “You need to have an educational system that supports that.”

For the finance sector, there is also value in more data on entrepreneurship and how to foster more favorable climate.

“We’re hoping it will be a recurring event,” said Adel Boseli, cofounder of investment platform Shekra. “There is a big lack of data, so [with the new report] we can make more conscious decisions.”

In terms of financing, there are plenty of opportunities to evolve and introduce new ways to foster entrepreneurship in Egypt.

The report identified the “lack of innovative and suitable financial instruments” as the top constraining factor to entrepreneurship in Egypt.

Some of the issues and solutions discussed at the finance roundtable included new funding solutions for SMEs, involving banks in a more indirect role through partnerships with VC firms, more education and training on investment risks.

For Hattab and her colleagues, the ecosystem is a ready for a more inclusive and constructive discussion and action plan.

“The ecosystem now is more welcoming to new and different players, you can find people from different backgrounds and sectors,” she said. “The ecosystem is trying to have shape and grow beyond this.”

While bringing different actors together will certainly be valuable, the ultimate test will be breathing life into these action plans.

The GEM report made several recommendations for the government as well, including creating a regulatory body – a Ministry of Entrepreneurship – to support entrepreneurs. (Not everyone was keen on this idea at the forum.)

Other suggestions included reducing the tax burden on new businesses, streamlining regulations for starting a company and alleviating other regulatory and legal barriers for new entrepreneurs.

“What concerns me is that we did not have a high level of decision makers involved,” Kirby noted. “Entrepreneurship is not about debating, it is about bringing change.”