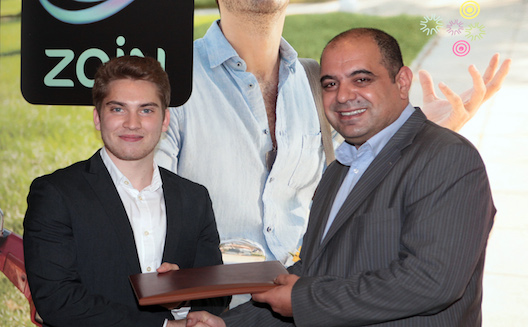 Last week, Zain Jordan signed an agreement with Zoomaal, the region’s largest crowdfunding platform, as part of its efforts to help develop Corporate Entrepreneurship Responsibility (CER) in the region.

Under the terms of the parthership, Zain will provide support for a selection of Jordanian startups with crowdfunding campaigns on Zoomaal by matching their funds raised on the platform, with an agreed upon cap.

Projects eligible for the Zain Jordan challenge should have a Jordanian founder, be from the Jordanian diaspora, or have a project that is implemented in Jordan.

This agreement comes as part of a program comprising several activities aiming to support Jordanian creativity. “Zoomaal and Zain Jordan are working together to give the Jordanian youth a set of exciting opportunities that will be revealed one step at a time. As a primary activity, we will be launching an education-themed challenge, in which $10,000 USD will be distributed in matched funding to the best creative education projects in Jordan,” says Dib Semaan, VP of Operations at Zoomal.

According to Semaan, Zoomaal will be announcing several other strategic partnerships, with organizations that share Zoomaal's mission. These partnerships will include running challenges and supporting projects through matched funding, and meetups in several Arab countries with the goal of creating awareness about crowdfunding and other activities that will be announced in the near future.

The Zain Jordan Challenge is the fourth to be launched on Zoomaal, as part of a series of challenges that have collectively raised over $225,000 USD for creative projects in the region.

Another Zoomaal partnership announced last week is with international development organization Hivos, setting up the Must See Film Challenge. “This challenge aims to support up-and-coming Arab filmmakers to shoot, produce, and complete their own films. It is an open call to filmmakers that have projects from all genres be it horror, documentary, adventure, or comedy – even a YouTube series or an animation,” says Semaan. Hivos will also match funds raised with an agreed upon cap, as long as the project meets its goal first.