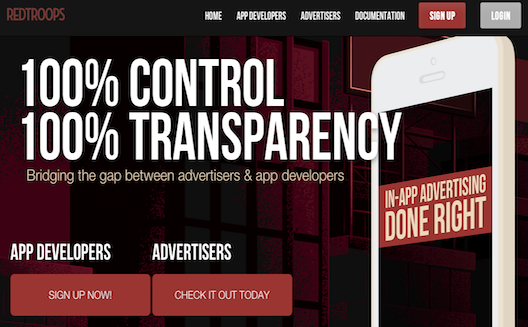 When Samer Tarazi and Omar Massad of RedTroops – an in-app advertising-focused startup that connects advertisers and app developers, and allows even the most novice of would-be advertisers to build rich-media ads – pitch their business to potential investors, they describe the current in-app advertising industry as a ‘black box’ that has little in the way of transparency or control for either advertisers or developers.

According to the RedTroops team, the current in-app advertising industry works as follows: Advertisers and developers alike must deal with ad networks, which serve as the media buyers for the industry and act as middlemen between the two sides. Advertisers pay ad networks to place ads on their behalf and entrust that the most is being done to maximize their return on investment. On the other side of the coin, developers receive a variety of advertisement formats, some of which may not be suitable for their particular app, and are often left in the dark about the specifics of their payout.

“For both ends it seems like it’s an inefficient, no-control, no-transparency process that is really lacking. And what we’re trying to do is remove that black box, remove that middle man, and create a direct connection between the app developer and the advertiser,” says Tarazi, CEO of RedTroops.

“Simply, the purpose of RedTroops is to make in-app advertising accessible to anyone around the world. We’re just trying to make it really simple and straightforward… I want a guy who’s selling falafel to create an ad for their shop,” he adds.

RedTroops, which is just beginning to unroll its product, is attempting to make in-app advertising less opaque and more accessible in a number of innovative ways.

First, the team has significantly simplified the process of creating ads (and made it way cheaper) with its “drag and drop” ad builder, which allows advertisers to build a rich-media ad in just few minutes. Users simply drag components such as videos, 3D viewers, sliders, text, images, buttons, and forms into an ad structure, which is seamlessly formatted into an HTML ad, all without the need to code. All of the ad building and various analytics are free to use by both advertisers and developers.

The team displayed the builder to me by constructing a multi-component rich-media ad in a matter of minutes, and even as a non-techie, I’m confident that I could easily make an ad of my own.

Second, RedTroops has removed the need for the ad network middlemen by developing a space in which advertisers and developers can deal directly with each other, in what they’re calling the Marketplace. Here, app developers offer ad campaigns on their apps, i.e. x number of impressions on x number of apps for x dollars, which are either purchased or bid on by advertisers (this is why the team dubs RedTroops “the eBay of in-app advertising”).

Advertisers have the option of targeting their ads by filtering apps according to location of download, app category, weekly active users, and the current price of the ad space. Once a campaign is either purchased or won, RedTroops holds the advertiser’s money until the parameters of the campaign are met, and then releases it to the developer. RedTroops monetizes by taking a 15 percent commission on all Marketplace transactions.

Since the RedTroops team expects that the Marketplace will largely appeal to small- and medium-sized advertisers and developers, it also will offer its product in a “solutions-based approach” that will make RedTroops a self-service ad platform for larger, more established advertisers and developers. Advertisers will have their own fully branded stores where ads are created and subsequently approved by developers. This automated process eliminates the need for sales teams and ad networks for both parties. Currently, RedTroops is offering the solutions-based approach at a commission but plans to switch to a freemium licensing model in the near future. 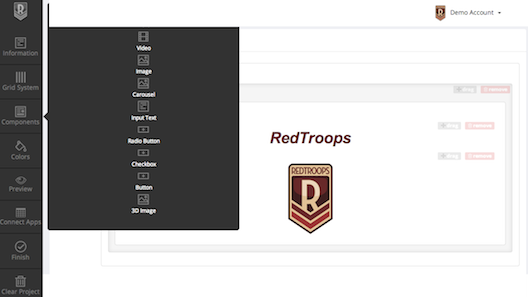 RedTroops was originally intended to be an app developer network that, in addition to having its own set of apps, would help small developers grow their apps and then leverage this growth into increased ad revenues. However, after spending three months at the Plug and Play Tech Center at the beginning of this year, Tarazi and Massad honed their idea to what it is today. They saw the great potential of in-app advertising, an industry that according to estimates (paywall) could grow to $17 billion USD by 2018, and made strides to develop a product that they believe is positioned to capitalize on this growth.

Investors seem to believe in RedTroops’ potential to capture a share of the in-app advertising market; the team recently closed a seed funding round of $100,000 USD from MENA Ventures Investments and a couple of individual investors plugged into Jordan’s tech industry, who are helping RedTroops connect with premium publishers in the region.

The team plans to begin a big round of fundraising during the first few months of next year, but for now Tarazi and Massad are focused on building their user base, adding new features, and gaining traction in the region. From there, they hope to expand into other markets, including the US.

Despite competition in the mobile ad-building industry from platforms such as Amobee and InMobi Studio, the RedTroops team believes that it has found a niche in which it can be successful.

“I think that everybody is fighting within the same set of space,” says Tarazi. “They’re going after mostly app developers wanting to spend money within other apps, they’re focusing 100 percent on that...so I think everyone is in a certain space, not paying attention to the extremes.”