Leaving behind his Beirut childhood, Louay Eldada went off to New York City to attend Columbia University. The PhD he earned there is in Optical Engineering, but despite his Ivy League advanced degree he believes that “education is not worth much unless you generate value for shareholders and contribute to society.” Serving as an executive at leading US firms including Honeywell, Corning, Telephotonics, Dupont, Heliovolt, and Sunedison, he did just that.

Eldada used what he learned from his life as an executive, especially from Honeywell CEO Larry Bossidy and General Electric CEO Jack Welsh, to start four of his own companies: two in fiber optics in the telecommunications sector, one in solar energy, and, most recently, one in laser sensing. He sold the first three ventures to Fortune 50 companies. How did he accomplish all of that? On a personal level, by being “humble, ready to listen and learn” in addition to a “no-entitlement attitude,” says the engineer. On the business side, he believes that the secret is in “hiring a team with the right combination of aptitude and attitude to move fast and get good customer feedback rapidly.”

I met Eldada at a small cafe in Menlo Park, California, where he explained some of the technical complexities of his most recent venture. Quanergy Systems, currently a team of 20, is developing the world’s leading Lidar: a smart sensing tool for 3D real-time mapping and object detection, tracking, and classification. Quanergy’s Lidar tools are so far of interest to logistics firms, smartphone companies, automobile manufacturers and even potentially Google as it develops its autonomous driving cars. You might have seen the mushroom-like bucket-sized object on top of the Google driverless car that serves a similar purpose; “we are designing one the size of a small apple,” Eldada explained, “and in the future, it will be a solid state system and a single chip that could go on a cell phone.”

Quanergy has already raised a seed round of $4.5 million from investors such as Tesla founders, Samsung, Transportation Technology Ventures, and Newbury Ventures (Techwadi Rising Tide Fund). 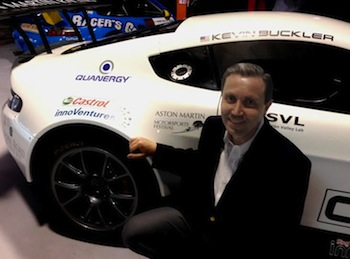 Although he’s found success in the States, Eldada remains deeply engaged with the Lebanese and Arab communities. He volunteers to share his experiences through two professional diaspora networks, Lebnet and Techwadi. “Everything is a hundred to a thousand times more effective when you do it through a network,” he explained. “Techwadi and Lebnet have helped me help other people. Without them, most of the activities with Silicon Valley and the Middle East would be a few percent of their current value.”

“Sharing knowledge at this point of my career is the biggest joy in my life,” said the engineer.

Nevertheless, he believes that more could be done on the diaspora side. “Helping each other is an area where we Arabs can improve…. Other communities are better at this than we are, and there is no reason that we can’t do it well,” he said.

To facilitate this, Eldada retains professional ties with the Middle East. He outsources software development to the region, specifically Lebanon, Jordan, and Tunisia. While he is impressed by the quality of work, which he says is “superior and [lower] cost,” he hasn’t made any hardware development work in the Middle East. Rather, he outsources his hardware manufacturing to East Asia. “It’s impossible to even consider putting a factory in MENA,” he says; the political, security, and economic situations are major impediments. “The 2006 bombing [referring to the July 2006 Lebanon-Israel War] is a reminder of how things can turn bad in that part of the world,” he explained. But the changing nature of the region’s entrepreneurship sector may bode well for outside investment. “If developers save work in the cloud, it’s fine. If we have a factory that gets destroyed, then we lose everything,” says the entrepreneur.

Despite the turmoil in the Middle East, Eldada is very optimistic about the future and counts on the young generation to bring about change and development. He is realistic about the magnitude of the challenge though: “It will take a generation or two to change things.” To put things in perspective, he said: “Look at what South Korea [created] from nothing in 50 years… What do Koreans have that we don’t have? A really good sense of sticking together.” For Lebanon to move forward, he thinks that the young generation should clamp down on sectarianism, nepotism, and corruption and establish more transparency, meritocracy, and democracy in their institutions.

When I asked if he would ever move back, he said that he would consider living between Lebanon and the US, but not until some changes are made. “The day Lebanon manages to do what South Korea did by being cohesive, I will go back,” he said with a daring smile. Until then, Eldada will continue working on his ventures and might even someday make that billion dollar exit they talk about here in Silicon Valley. I made sure to take a picture with him for the record, just in case.