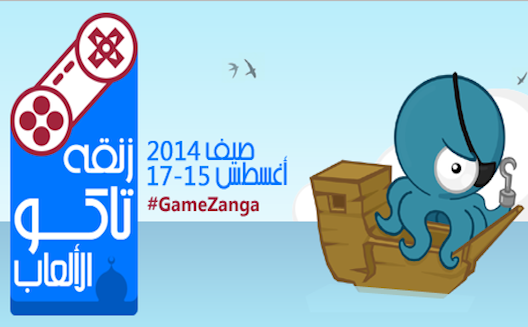 Last weekend in Amman, game development studio GameTako, in collaboration with publisher Game Nomads, hosted its fourth Game Zanga competition. Over 300 game developers participated, together submitting 54 games to the judging panel who will award prizes over the coming weeks.

Game Zanga has been held annually since 2011, and has overseen the creation of over 120 Arabic games so far. The ultimate goal of the event is to push regional gaming developers to stand on their own two feet, rather than become successful or award large cash prizes.

In an email to Wamda, Samer Abbas, the cofounder of GameTako, explains the motivation for organizing the events: “Game Zanga is an opportunity for developers to socialize with [their peers], to learn new tools and techniques, and to make a game within two or three days. It’s game developer dreamland in a way; developers love it. As for the ecosystem, it is ideal for talent discovery, and for rapidly generating new Arabic content, games, and IPs.”

A selection of games created this year at Zanga Games' Jordan event.

Since its inception in 2011, the challenge has grown – a lot. “The first Game Zanga had 15 games only,” Abbas says, but “the in the next three we’ve had anywhere from 45-60 games created each weekend.” The event has also expanded from one venue in 2011 to six in 2013, although “due to tight schedule with Ramadan and Eid” this year, there was only one event at the Jordan Gaming Lab. “I expect Zanga gatherings to pick up again next year,” Abbas says.

Participants are tasked with creating games within 72 hours adhering to a community-voted theme that will be revealed at the start of the first day (this year’s theme was, perhaps fittingly, chaos). At the end of the third day, participants are given time to finalize and submit their games.

Prizes this year will include license giveaways of popular game engines from returning sponsors Unity Technologies, GameMaker, Construct 2, YoYo Games, Scirra, and Stencyl. The grand prize, awarded to one of three finalists selected to exhibit at Gamers’ Day in Riyadh, is “a publishing contract on mobile platforms,” including mentorship, development, marketing assistance and additional funding to bring their game to market.

Game Zanga organizers have carefully chosen contracts as ideal prizes. While cash was the original Game Zanga prize, “over the years we’ve gradually reduced the value of the prize with the intent of encouraging developers to participate more out of passion…. A few of us in the community feel that learning something new or making a game makes you a winner, and we’re trying to promote this way of thinking.”

Results will be announced in a few weeks, but until we know the results results you can see and test all the games on here.

Behind it all is the goal of encouraging regional developers further, to create better games. Game Zanga is just a step in the process, rather than an end unto itself: “We’re trying to push developers to take their games beyond the three days of the Zanga, and release them to the market. We want developers to feel empowered, and we want to have success stories out there.”