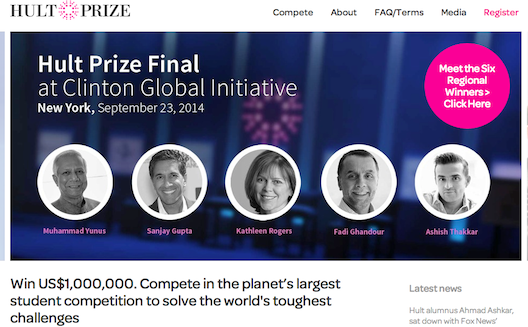 Wamda Chairman and Aramex founder Fadi Ghandour has been selected to participate in a judging panel that will award this year’s Hult Prize. The winner will receive mentorship and advice from the international business community and $1 million USD in seed funding.

Named one of the top five ideas changing the world by former US president Bill Clinton, who will host this year’s ceremony at his headquarters in New York city, the Hult Prize is a social entrepreneurship accelerator comprising four stages. First, university students, divided into teams of four or five, devise ideas for tackling challenges facing the global community.

Next, six regional finalist teams are invited to attend the six-week Hult Prize Accelerator at the Hult International Business School in Boston, followed by the Global Finals at which teams pitch their ideas and a winner is selected.

The final phase is implementation, aided by the Hult Prize accelerator and its partners.

The challenge for this year’s competition was ‘Solving Non-Communicable Disease in the Urban Slum. Of more than 10,000 first round applicants, the six finalist teams are as follows:

Ghandour and the other members of the judging panel – CNN anchor and neurosurgeon Sanjay Gupta, Nobel Laureat Muhammad Yunus, Earth Day Network president Kathleen Rogers, and Mara Group founder and MD Ashish Thakkar – will select a winner next Tuesday. The following day, President Clinton will present the startup at the Clinton Global Initiative in New York.