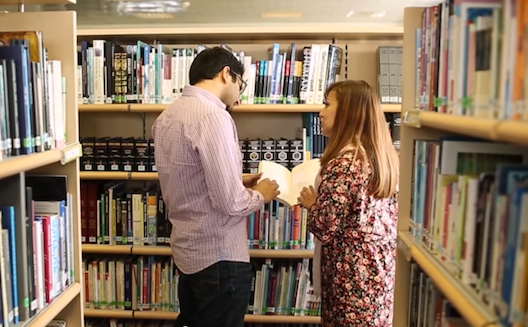 It seems that the determination of youth in the Lebanese city of Tripoli is steadfast in the face of political and security unrest. Nine months after a fire destroyed thousands of books from one of the most important collections in Lebanon, the Al-Kindy project is preparing for a launch with the aim of encouraging young people to read and exchange ideas.

A cultural space in the city, Al-Kindy, taking its name from the famous Arab philosopher, is dedicated to university students and young professionals. Comprising a small library, reading rooms, and a conference room, there is also a cafe-cum-socializing space. “Behavior is contagious,” says Najwa Sahmarani, the young woman behind the project. In hopes of creating a wave of positivity amongst the youth of Tripoli, she wants to spread awareness about the importance of reading. The space will also host and organize cultural and social activities, working in collaboration with local initiatives like We Love Tripoli, TEDx Azmi Street, and Tripoli Entrepreneurs Club (Sahmarani is an active member in the latter).

Starting initially with a campaign using local volunteers to educate Tripolitans on the importance of reading, Sahramani says that there has been an enthusiastic response and estimates that about 500 people supported the campaign, either through social networks or with the donation of books. This then inspired her to take the idea further and develop a space that could embody and promote the ideas. Through the crowdfunding platform Zoomaal, the initiative has raised $25,000 USD which will go to campaign costs, rent, and equipment for a year.

Sahramani, who devotes all her time to the project, is currently working on finding ways to secure an additional $40,000 USD to finance the operations of the first year. The founder hopes to get this amount in the form of a grant from an international party or organization, an investment, or as a last resort, a kafalat loan from a Lebanese bank.

When it comes to the original inspiration for the project, books, Al-Kindy has so far managed to collect more than 350. Sahmarani is keen to state though that they are not on a quest to establish Tripoli’s largest library, rather she wishes to focus on raising cultural debates and encouraging reading.

Until a business model is put in place, future plans include partnerships with regional libraries whereby they would be able to source parts of their collections; Sahmarani is also considering the idea of creating a revenue-sharing model involving those who donate books.

When it comes to obstacles, the absence of a business model sits alongside the issue of technology. For many young people reading is seen as outdated, as they spend more and more time with their smartphones and on the internet. Shamarani and her team though are not distracted from their vision and are keen to establish a cultural circle in their community. Highlighting the pulse of the Tripoli youth and their perseverance in the face of tragedy is no doubt what pushed them to walk in the footsteps of the ‘philosopher of the Arabs’, Al Kindi himself.