Update: Mercy Corps has extended its crowd funding campaign for Gaza Sky Geeks by an extra 30 days and it will now run until January 8 2015.

When your neighborhood gets bombed, humanitarian concerns come first. Then, when the immediate needs of the survivors have been addressed, attention can be turned to rebuilding, as Gaza’s one startup accelerator is now attempting to do, two full months after this summer’s conflict came to an end. An after effect of this is the need to find money to repair the damages, or in the case of the only startup accelerator, (GSG), the ability to continue with the work they have started.

Launched in October, Gaza Sky Geeks’ campaign to raise $70,000 in pledges has so far been a success, although the team is still about $10,000 short of their total goal.

GSG’s original funding, from both Google and Mercy Corps, ran out a few months ago; since then, Mercy Corps has been contributing whatever money it can. New pledges are coming from the Bank of Palestine, the Source of Hope foundation, as well as individual donors. It is important to note though that Google has continued to support the accelerator through their Google for Entrepreneurs program, in particular by funding a mentoring program for young women business leaders in Gaza.

“There has been a strong representation of individuals, both in the Middle East and in the US,” says Montauk. “Lots of entrepreneurs in Silicon Valley, who didn’t even know there were startups in Gaza… a pretty equal number of pledges in both regions.”

Montauk also points out that there have been many donations from local Gazan entrepreneurs, up to $100 a time, an amount that is incredibly generous given the economic situation many Gazans have been left in since the summer. 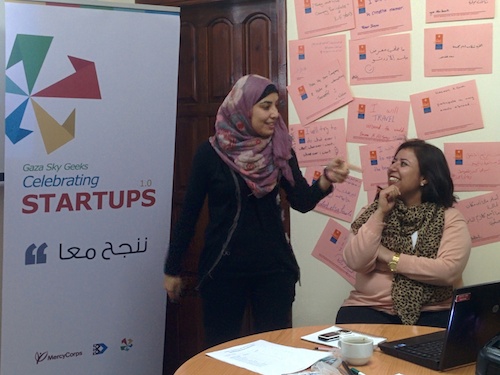 While GSG was lucky to not have suffered any physical damage to its premises or its members, the effects to its community have widely felt. But the work continues. Montauk told Wamda that even during the three-day ceasefire, young entrepreneurs that were working with the accelerator were turning up asking, “When is our incubation going to start?”

Disruption of Gaza Sky Geeks' services would be fundamentally disruptive to the startups it incubates, including TVey, a TV planning and social media application. Content associate Dalia Mousa says that "GSG enabled me to invest my knowledge and power in what I believe would one day be successful projects, or companies." This momentum is crucial to the growth of the ecosystem.

With four startups currently in the program, and seven startups in the pipeline, Montauk is continuously amazed by the passion of those she is working with. “Apart from Silicon Valley and Harvard,” says the director, “I’ve never seen such a high density of passionate, smart, committed, optimistic, and resilient people.”

The Indiegogo campaign, which begins on November 9, to keep Gaza Sky Geeks in operation is open for your pledges here.