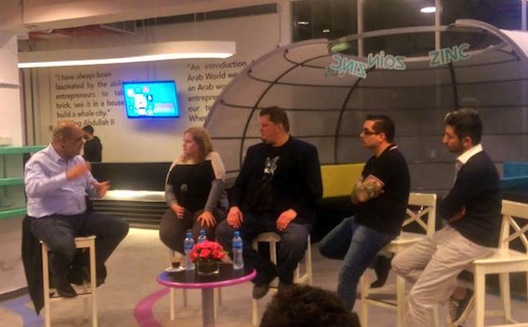 Taking advantage of the influx of international gaming industry leaders in town for last weekend’s Jordan Gaming Summit, Zain Jordan, in collaboration with the Jordan Gaming Task Force, assembled a diverse group of experts for the “Gaming towards a prosperous Jordan” installment of the Think ZINC speaker series.

The overarching theme of the discussion, which was well attended despite some bad weather in Amman, was that while Jordan, and the wider region, have legitimate potential to be players in the global gaming industry, there are several steps and processes that need to be done in order for the sector to mature and garner the attention of investors, developers, and gamers outside the region.

Perhaps the most important process, according to Rachad Saddi from Google, is an industry-wide branding effort to reshape the way the region is viewed by foreign companies and investors. “The most important thing is our strategy; to define our strategy for the next five to ten years. What we need for the next five years is to brand ourselves as producers, not only as consumers. And once we brand ourselves as that, then opportunities will come to us,” says Saddi. This branding can largely be accomplished by continuing to put out solid gaming content and growing the region’s game developing community, according to the Google consultant.

Community building, collaboration, and generating buzz were other emphases echoed by many of the panelists. “You’re building a community here, and you want to build a very solid community. And one thing that’s really important, it’s not so much about trying to build a game and getting it out there first, but building good, solid content... and build a solid community that’s going to grow, and as it grows and as you build your social networks, you’ll get more buzz... and people will know that there is this community growing here,” explains Greg Mitchell of Epic Games, Inc.

In the interest of strengthening this nascent gaming community, Mitchell suggested that local development teams and studios should look to collaborate, and perhaps even consolidate into larger and better equipped teams, so that higher quality products can begin to come out of the region.

Lastly, it is execution that underpins the growth of Jordan’s and the region’s gaming industries. When moderator Ahmad Hanandeh questioned the panelists about how seemingly one in a 1000 games actually achieve strong commercial success, Gavin Goulden of Insomniac Games replied: “If it’s a 1000 bad games, none of them are going to be successful. You have to ensure quality over anything... it’s about execution.”