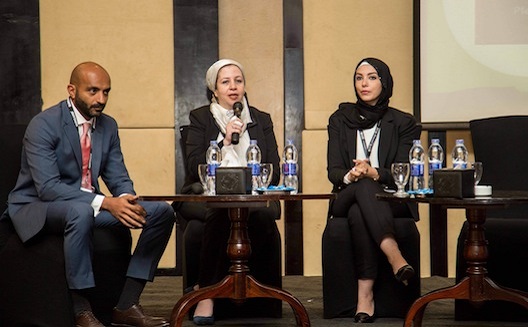 Egypt's crowded banking sector is catching up with online payments and banking technology, but there's still plenty of space for innovation and disruption.

“What we’re observing is that while everyone wants to have multi-channeling [providing both online and offline bank access]... It continues to be very much a complimentary distribution approach to branches,” he said on the sidelines of the Banking Technology Egypt summit last Monday.

One representative of the French software company Sopra said that Egyptian banks were happy to cater to customers who already had bank accounts, but were very unwilling to extend their services to the unbanked or underbanked masses.

Moreover, several local bank executives and speakers said that Egyptian banks had to begin investing in their ‘core banking’ businesses and modern IT infrastructure if they wanted to maintain market share in the crowded banking sector, as well as offer Egyptians the ability to access accounts and bill paying services online.

That focus on providing basic online services to Egyptians with bank accounts is creating a space for innovative companies. Electronic payments startup Fawry was one of the first businesses to take advantage of the dearth of financial technology options in Egypt. It has just rolled out its latest offering whereby customers across the country can pay electricity bills issued by all power companies in Egypt.

DoPay is another such startup exploiting that gap. It's partnered with Barclays Egypt to provide bank accounts for the 90% of Egypt's 93 million-strong population who don't have them. DoPay currently provides software to companies to manage payroll systems, and is waiting on regulator approval to launch a card system for employees as well.

Founder Frans van Eersel didn't want to comment ahead of receiving regulator approvals, but has said in the past that DoPay partnered with Barclays Egypt to ‘piggy-back’ off its banking license to provide the cards which companies could then pay salaries into. Card-holders can use ATMs and shop online.

Regionally active companies have already begun exploring this new space. TPay is the regions' first mobile billing company, allowing phone users to pay for online services such as games or reservations with their phone credit. There's also Emirati company PayFort which now offers its online payment portal in Egypt and doesn't require customers to have a bank account or credit card, as well as PayPal, which does.

And still there is space for more. Kareem El Geresy, Egypt sales manager for financial software company Misys, sees a gap in the market for peer-to-peer payment transfers.

“I think there is one part that's missing. Banking that can do transactions for very small sellers.”

Vodafone Cash provides a similar service but requires users to be subscribers and have downloaded a bank-account-linked app on their smartphone, before allowing transfers. El Geresy believes that for small business people, such as his friends who run clothing and food businesses solely through Facebook and deal in cash only, a company with a third-party app that allows very small payments to be made to any account would solve this problem.

The Central Bank of Egypt (CBE) released its guidelines around internet banking on Sunday; these stipulate board oversight for online activities, strong authentication and access procedures, activity logging, and session management. Banks have a year to implement the rules.

The CBE hasn’t issued a new banking license since 1979, a factor which has done nothing to cull the crowded banking market in Egypt. This means that new entrants like DoPay or companies with mobile money applications such as Vodafone must find a willing partner with a license to piggyback on.

El Geresy, who used to work with stock market technology, says caution on the part of the CBE is a double-edged sword: while it kept the country's banking system safe during the financial crisis of 2008, it does tend to retard innovation.

“It's basically in the safe, very defensive side,” he said.