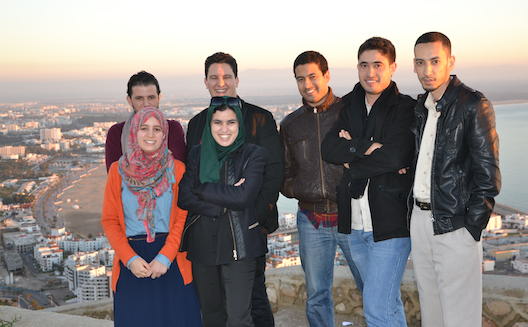 Adam Bouhadma is only 24, and has just raised 2.5 million Moroccan dirhams ($280,000) for his company Education Media Company from Maroc Numeric Fund. He created his first website 9rayti, now the leading website for exam preparations and career guidance, at the tender age of 17.

On being an entrepreneur and student

In 2008, Adam, then preparing for his baccalaureate, realized that there was no good website to help student prepare to the end of high-school exam. “There were websites but they were created by teachers, and weren’t that good in terms of presentation,” he explains.

So, when he graduated high school, he decided to create, with two friends, 9rayti – ‘my studies’ in Moroccan dialect – a website that aggregates content created by teachers and was available at the time either on a simply designed website or on USB sticks (remember, this was in 2008). His two friends decided to focus on their studies, but Bouhadma decided to work on both his studies and 9rayti.

The entrepreneur may have been young, but he already felt ready. As a blogger and web developer in high school, he had the chance to meet a few web entrepreneurs like Taher Alami and Younes Qassimi, and dedicated a lot of his time reading Moroccan and French entrepreneurship blogs.

The young man, inspired by the American model of the student who works on the side, couldn’t picture himself being only a student, nor could he imagine quitting university, like others have done before him. “It’s easy to quit school [to focus on your startup] but it’s a huge risk,” he explains.

Proving the possibility of being both a student and an entrepreneur became a personal mission for Bouhadma. He took the stage a few times to spread the word, including at the Ignite conference in 2010.

To succeed, Adam is convinced that the website needs to talk in the same language that high school students use. So his first decision was to choose a name in Moroccan dialect, rather than classical Arabic, and a logo with Latin characters and the symbol 9 to indicate the letter ‘qaf’, for a more modern take.

Then, he committed himself to attempting to understand the needs of high school students. Reading forums, he discovered that young Moroccans had many questions on what to do after high school, and couldn’t find the information they needed online. So he created a directory of university and graduate schools with clear information on each school’s specialties and admission process. 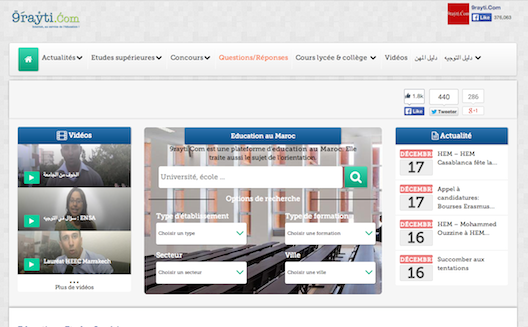 Working with universities and schools

When he launched this offer, Bouhadma knew he was creating the first website where universities could advertise and communicate. Back then, universities only had two options: advertise on Menara.ma’s page with baccalaureate results, or advertise on AdWords, then not so established.

Starting in April 2009, the entrepreneur started talking to universities, and in the fall of 2010, the startup already had five schools among its clients. Because the website became the media darling – “people were really interested by the fact that we were young, it helped a lot” – and because it had a unique positioning, universities quickly showed up at the startup’s door.

Testing in the DNA

The team then decided to diversify. In 2012, they tried asking students to pay for lessons and exercises, using surcharged texts. But because the telecoms were charging a lot to implement this solution, the prices the startup had to charge turned out to be too high for students.

So the team decided to focus on niches, students with very specific needs. They discovered that training centers that prepared students for graduate school exams were having a lot of success, but were expensive and not available outside of the big cities. They decided to test offering online training for one business school, for a discounted price. The test proved successful, and so the team launched Concourat – ‘competitive exams’ in dialectal Moroccan – to offer trainings for more schools. 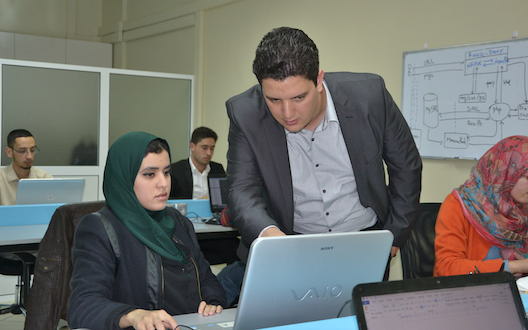 Adam Bouhadma in the offices of Education Media Company

The market is limited, he admits, but the offer is profitable. Still, the team kept looking for a product that could be relevant to a larger portion of the Moroccan students. This fall, they launched Prepabac.ma to offer students training for the baccalaureate, prepared by teachers. The team will soon test offering payed online lessons.

This technique enabled Education Media Company to cut services that weren’t going to make it, like Smsorientation.com, fast, and to validate the potential of others before putting too much time and money into it.

“[This fundraising] is a new stage for us,” explains the founder. Even if the company was already profitable enough to hire people, they needed money to make money, create more content, and grow.

“We’re not going to develop new services but we will grow [the ones we have now], adding more content and functionalities.”

This fundraising campaign was really useful for the company, explains Bouhadma. “It’s an interesting exercise to have to explain what you do to someone else. When you explain [your vision], you have to have your ideas structured.” He adds that the Maroc Numeric Fund team helped a lot with building the business plan and creating a new, efficiently structured Education Media Company, to gather all the websites they have created in the last years.

Even if it was a positive experience for him, Bouhadma feels he has to warn entrepreneurs: “It’s a long process… you should only do it if you need to.”