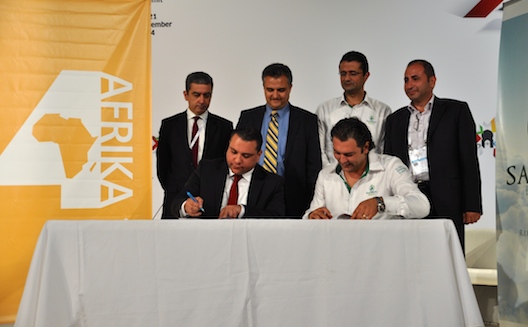 Anyone who has had the chance to speak to Anis Aouini and Hassine Labaïed, the cofounders of Tunisia’s Saphon Energy, knows that Saphon Energy could become the African and Arab international success story, and indeed that Saphon Energy could change the impact solar energy has on the world. But of course, innovative technology is not enough to make success happen; good execution and commercialization are crucial to getting good ideas implemented.

But so far, it seems as though the team is executing. During the Global Entrepreneurship Summit, which took place in Marrakech from November 19th to 21st, they announced that two months ago, they began the industrialization phase of the Saphonian, their bladeless and rotation-less wind turbine.

For this industrialization phase, the team will be able to count on the support of Microsoft 4Afrika, the multinational’s program supporting high impact innovation in Africa, with whom they signed a partnership deal during the same press conference. This partnership will include technological help, as well as general support to help the large-scale startup get the visibility it needs.

Ever since its launch in 2012, the Saphonian has piqued the curiosity of many experts and media, including BBC, NPR, France 5, and The Christian Science Monitor. It’s understandable: the Saphonian has managed to overcome most drawbacks of conventional wind turbines:

The Saphonian is versatile: it can be used to pump water and power air conditioners and heaters. Surfing the Internet of Things trend, the Saphonian will also collect and monitor data in real time, which users will be able to use to optimize their consumption.

“It’s a new technology that can sound shocking in the wind energy” community, admits Aouini, “because a wind turbine without blades goes against what people imagine.” Only time will tell if people are ready for a product so different from what they’re used to.

The startup is currently in talks with industrials, and should commercialize its first B2C and B2B models in two to three years.

Saphon Energy, a startup rooted in Tunisia and Africa

The two cofounders, who returned to Tunisia after launching successful careers abroad, are undoubtedly moved by their desire to help the two regions they identify as home. Their company is even named after the ancient Punic god of wind, Baal Saphon, an homage to the great Carthaginian civilization that inspires them. (Hassine Labaïed has written a few articles for Wamda on the role of the diaspora, and the potential of Tunisia as a tech hub.)

For now, the startup will focus on Africa due to its potential – 75% of Africans don’t have access to energy, and the link between energy and poverty is direct, Aouini reminds us – but the team doesn’t hide its global ambitions. “We need to go step by step, but we have the ambition to go as far as possible,” says Aouini.

The startup, which now employs 11 people, has been funded by two Dubai-based business angels, with whom Labaïed worked in the past. “We wanted to do something in the field of energy,” explains one of the business angels who preferred to stay anonymous. “Renewable energy is a crucial need in our society, and [this project] touched us. This seemed so important. Someone had to step up and help this kind of project.”