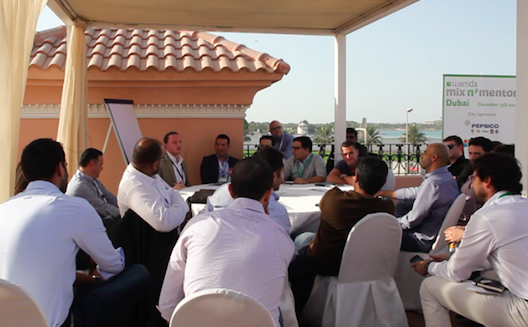 On December 13 Wamda hosted it’s final Mix N’ Mentor of 2014 at the in5 Innovation Hub in Dubai. Hosting some of the city’s most active entrepreneurs, mentors, and industry experts Wamda got the chance to benefit from and share advice and insight of global experts including Jonathan Labin, Facebook's Head of the Middle East, Africa, and Pakistan; Narain Jashanmal, Client Partner Retail & eCommerce at Facebook MENA; LMTD founder Will Hutson.

Broken up into four parts the day included sessions on fundraising and business development, one-on-one sessions between entrepreneurs and mentors; workshops looking at digital content, public speaking and investment; then a fireside chat where attendees shared their insights and conclusions gleaned from the day.

“We’re seeing more businesses crossing the $1 million threshold,” said Khaled Talhouni, a principal at Wamda MENA ventures, addressing entrepreneurs and investors at the event. He noted that very few businesses were reaching that milestone just three to four years ago.

Indeed, startup funding in the Middle East and North Africa has increased more than two-fold since 2008, according to Wamda’s research. Still, cash is elusive for many startups in the region - about 68% of companies polled by Wamda said they did not receive follow-on funding.

As there is no shortage of capital in the region, entrepreneurs need to focus on their project’s mission as they pursue funding.

All of the investors at Mix N’ Mentor Dubai cautioned entrepreneurs against tailoring their business plans towards investors, stating that investors would bet on the entrepreneur as much as the business itself.

“We need to believe in your strategy,” said Amir Farha, co-founder of Tandem Partners and managing partner at BECO Capital.

Entrepreneurs must seek value beyond cash when sizing up potential investors.

Pawel Iwanow, Managing Director of Mountain Partners Middle East, cautioned one entrepreneur about accepting money from an investor who is enthusiastic, wishes to be part of the management team but knows very little about the space in which the startup is operating. “Try to get smart money,” he said. “There’s money lying in the street.”

There can be many reasons why entrepreneurs have a tough time accessing cash. Oftentimes it’s the pitch.

Nearly 30% of funders polled by Wamda earlier this year say entrepreneurs do not pitch their business effectively. Some of the rules of public speaking apply for making a pitch, investors said. They also added that entrepreneurs should resist the urge to say too much when pitching a proposal. It is important to know when to pause while speaking. The pitch should be tightly focused, about 30 seconds in length and it needs to address an issue that the investor agrees is a problem.

While there are many reasons to be optimistic about the state of the startup space in MENA as 2014 comes to an end, some regional traits still hamper certain sectors - the business-to-business space continues to suffer from credibility issues. Investors noted that there is a perception that large holding companies have more to offer than small startups.

E-commerce, on the other hand, presents a tremendous opportunity in MENA. While the market was negligible three to four years ago, it is approaching $6 to 7 billion.