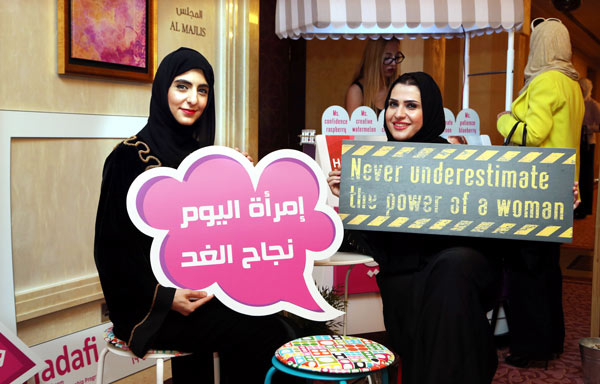 In a society where women are still economically marginalized and absent from the labor market, technology entrepreneurship is emerging as a solution that saves them from overlapping responsibilities that hinder their productivity as effective actors in society. Moms busy taking care of their homes and kids are now able to run a whole business online from the comfort of their home. However, despite all these facilities, entrepreneurship still lacks an effective feminine presence. According to a study carried out by Global Entrepreneurship Monitor (GEM), most markets are still masculine.

Women's involvement in the world of entrepreneurship is essential and crucial as an indicator of productivity, development, freedom, and social justice, and thus, focus should be poured into projects and programs that provide women the tools and means that contribute to activating their economic role. These initiatives include Hadafi, a program that puts Arab women in appropriate environments to help them achieve their entrepreneurial ambitions.

The program was launched in 2013 by Potential, a social enterprise offering free training sessions to Saudi women. Now, it’s available to women throughout the Arab world thanks to a partnership with PepsiCo, Dell, and Intel. “Hadafi was a small project in the beginning, but it rapidly expanded and we are looking to further develop it in 2015,” said John Katsabanis, Potential’s marketing manager.

The program’s idea was born after Potential noticed the lack of women in its other program which targets both men and women: SME Evolution Program, designed to support entrepreneurs. Ever since, the company has worked to attract women through Hadafi which it developed to encourage and enable women. “Entrepreneurs are usually afraid of failure and of actually starting the business, that’s why we don’t only offer awareness and education, but also mentoring and encouragement,” says Katsabanis.

The program extends over a period of four to five months divided over three stages. The first stage is an open session, an open-source collective platform that offers pre-recorded sessions on the program’s website, through which 50,000 women have been reached so far. These sessions are introductory, offering the basic principles of entrepreneurship and management and tend to be pretty simple, asking questions such as “What is innovation?” or “Who are entrepreneurs?” 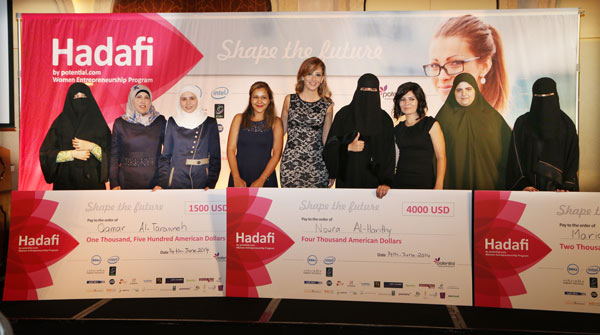 In the second stage, women over 18 can sign up for more detailed training sessions and workshops, 80% of which are available online, and 20% through live meetings. Katsabanis points out that the program combines both live meetings and digital sessions in order to benefit from technological features that offer the opportunity of learning to a wider audience without losing out on live interaction, which is irreplaceable.

These sessions aim to further develop the participants’ ideas and turn them into effective action plans that they can pitch in front of a jury. In addition to training sessions, Hadafi hosts specialized lecturers and mentors to share their experiences with participants. In the current session for instance, Pepisco CEO, Indra Nooyi, is to give a lecture on authentic leadership.

At the end of the second stage, ten projects are nominated to take part in the third and final stage where every participant is assigned a special mentor who helps her add the final touches to her project. In the end, three projects are selected to win valuable cash prizes (first prize is $4,000, second prize is $2,500, and third prize is $1,500). Mentors and experts with whom the program has collaborated so far include Bayt.com’s Peggy Chamoun, Intel’s Shady Shdifat, and Dell’s Souraya El Ghawi.

Hadafi has been able so far to graduate six companies which have profited from cash prizes as well as other benefits made available to winners including incubation, mentorship, training, and discounts from Hadafi’s partners. Winning projects include Wardat Store, the first online store to sell Taif’s rose products, and MICEit.co, an online platform for event and conference planning in Jordan.

It’s worth mentioning that the program includes women from different communities and social classes. Some come from rural areas, while others are from Dubai and Gulf countries, constituting a positive diversity that enriches the program with different ideas and opinions, as well as different target markets.

Katsabanis encourages women to take part in the program “because they have nothing to lose. If their project is still in the idea stage, we will help them develop it, and if they are already established in their business, we can help them in deeper areas such as marketing. We offer help that suits the needs of the project.”

Katsabanis’ advice for female entrepreneurs is “not to expect themselves to carry the weight of their business alone, but rather to seek help from mentors and experts.”