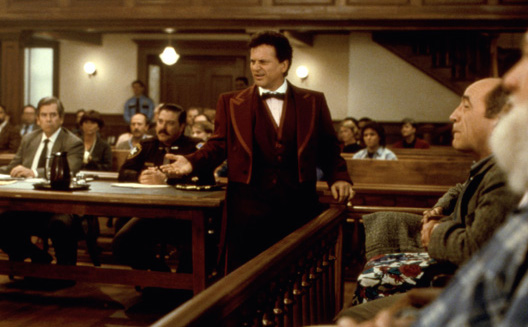 At the dawn of a new year, and potentially a new era of investment in the Middle East, startups and entrepreneurs would do well to take note of the following opinion of their fellow entrepreneur Nezar Kadhem of Bahrain’s eatapp.co: “I think the investors would have not been comfortable without a reputable law firm being involved.” When an attorney is accompanying a new business, whether into the bank or the boardroom, it can make the difference between gaining trust and never seeing it at all.

Many of us of all professions are clueless about the law, especially when it comes to how it might affect business. When startups are created it is quite often the legal side aspect of the process that is neglected. Whether it’s registration of your intellectual property (IP) or the correct formation of the ‘books’, many people starting out are not as clued up as Joe Pesci in ‘My Cousin Vinny’ (see above).

As the first part of a new series on startups and the law, this article is an overview of what startups should be doing – and not doing – in using the law as part of the search for investment.

What startups and entrepreneurs are doing wrong

“Quite often [entrepreneurs] have no idea about the legal field,” says Toufic Soudayha, a partner at Alem & Associates in Beirut, “and this includes at the investment level.” In his work with the Bader Young Entrepreneurs Program in Beirut, Soudayha says that he found many startups paying the law little to no attention.

Once a startup is at the point at which they want to seek investment, they need a lawyer. “It is imperative,” says Soudayha. “The lawyer’s involvement should not only be limited to drawing up the contracts,” he says, “but also to explain, whether to a startup or to the investor, their respective rights and obligations.”

Working at Bader, Soudayha met a lot of entrepreneurs that wouldn’t hold investors to their pre-established deals, i.e. accepting $20,000 when investors had previously promised $30,000. “You expect the young to be unprofessional but not that unprofessional,” he says. He also reports a lack of interest in legal booths at startup and entrepreneur meetups in the region.

Soudayha also says valuing their companies accurately is something those just starting out are also often naive about. “Valuing your business can be done without a lawyer, but it can also be done badly,” he says. “For example, not registering the IP rights in an effective manner can affect the value of a company.” This is where the presence of a lawyer is a good idea.

Yousef Khalilieh, a managing partner at Rajai K. W. Dajani & Associates in Jordan is in agreement that startups are most clueless about the law when it comes to investment. Having worked with startups since “even before they were called startups” he has seen his fair share of mishaps when it comes to legal pitfalls.

For Khalilieh one of the main failures on the part of startups is that they often they don’t have a “clear outlook as to how they should plan ahead when it comes to raising finance.” He says that they don’t fully realize how this could affect the company, their shareholding, and the rights of existing investors. “Legal structure and advisory coupled with the proper financial advisory services would put them in a much better place to grow in a more conducive environment that would attract investors and increase their valuation.”

What can be done?

In recent years, law firms partnering with incubators and accelerators has been of great benefit to startups. In Bahrain, eatapp.co's Kadhem said that when it came to the legal side of setting up his business his team opted to go through Tamkeen, the semi-government body that offers entrepreneurs and startups a range of advisory services. “We paid a lawyer to incorporate the company and to draft our shareholders agreement,” Kadhem told Wamda. They also had a lawyer help them administer changes at the Ministry of Industry and Commerce, such as updating of their memorandum of association, notifying relevant ministries about their updated MoA, and dealing with the bank to provide proof of deposit.

“I think the investors would have not been comfortable without a reputable law firm being involved,” says Kadhem. “Once I had told them that Grant Thornton were hired for the job, no questions were asked and I felt a sense of assurance from them.”

In Lebanon, Soudayha and his colleague Michel Ghanem are currently in the process of setting up a legal clinic that will be working specifically with startups, to be launched in the coming months (the two couldn’t give an exact date).

What investment-stage startups need lawyers for

These are the often voluntary investigations investors make into a company prior to signing the definitive documents relating to an investment. Legal due diligence requires a lawyer to a) summarize the legal status of the target company/business (its constitutional documents, licenses, main agreements, assets, employment, etc.), and b) to highlight all legal issues concerning the target company, like any past lawsuits or regulatory problems.

This document, also known as ‘heads of terms’, ‘memorandum of understanding’, or ‘letter of intent’, sets the basic or preliminary terms and conditions under which an investment will be made. It serves as the model by which to develop the definitive agreement of documents pertaining to the investment. As investments are made through legal instruments (equity, debt, or a combination thereof) or other contractual arrangements, a lawyer is most definitely needed for this.

This gives assurance to the party disclosing confidential information that the other party, the recipient with whom they are doing the deal, can’t go and share the information they’ve learned.

This is the negotiation and execution of the definitive agreements relating to the investment. These can be a share sale and purchase agreement, loan agreement, subscription agreement, or shareholders agreement.