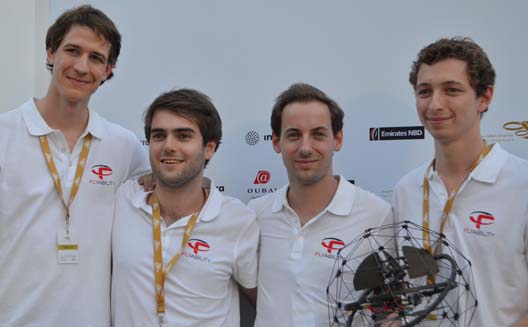 The winning, Swiss, team. (Image via Drones for Good)

Dubai Internet City was buzzing with the sounds of drones this week at the inaugural UAE Drones for Good competition as inventors showcased unmanned aerial vehicles (UAV) that they designed to solve social needs.

Sheikh Mohammed Bin Rashid Al Maktoum, Vice President and Prime Minister of the UAE, seeks to push drone development for the benefit of humanity, in sharp contrast to the way we usually hear about drones. He unveiled the UAE Drones for Good award, the purpose of which is to identify examples of UAV technology to have a positive impact on society.

Projects were evaluated according to technical feasibility, potential impact on society, and the quality of each drone’s physical demonstration. Of the 800 submissions from 57 countries, 39 were invited to demonstrate their projects to a panel of judges earlier this week.

The International Award went to Flyability, a team from Switzerland that showcased a drone that deftly penetrated confined spaces and is able to fly safely around people. The inspiration for Flyability’s Collision Resistant Drone came from a sense of urgency in improving search and rescue missions, said team member Patrick Thevoz.

“Our prize money [$1 million] will be used for the development of the next generation prototype for the delivery to our first customers,” Thevoz said. “It will help us invest in advanced sensory technology and more robust materials to make sure that this robot will exceed our current standards.”

A group of New York University Abu Dhabi students demonstrated the potential of UAVs to help preserve wildlife in areas that are difficult to access. They combined specially configured software with existing drone technology to survey, collect and store images of UAE’s Wadi Wurayah National Park. They received the National Award, and 1 million Emirati dirhams in prize money.

The winner of the Government Entities category was a team from UAE’s telecommunications corporation Etisalat, which constructed a drone that expands Etisalat’s wireless network capacity by acting as a mobile conduit.

The prospect of using drone technology in the logistics space has captured the private sector’s attention – companies like Amazon and Google have launched drone-based initiatives – in the hopes that the technology will streamline supply chains, enhance profitability, and improve customer experience. Some fundamental issues, however, need to be resolved.

Vijay Kumar, University of Pennsylvania UPS Foundation professor and Drones for Good judge and keynote speaker, noted that the use of drones raises politically charged questions of privacy, safety, and national security. 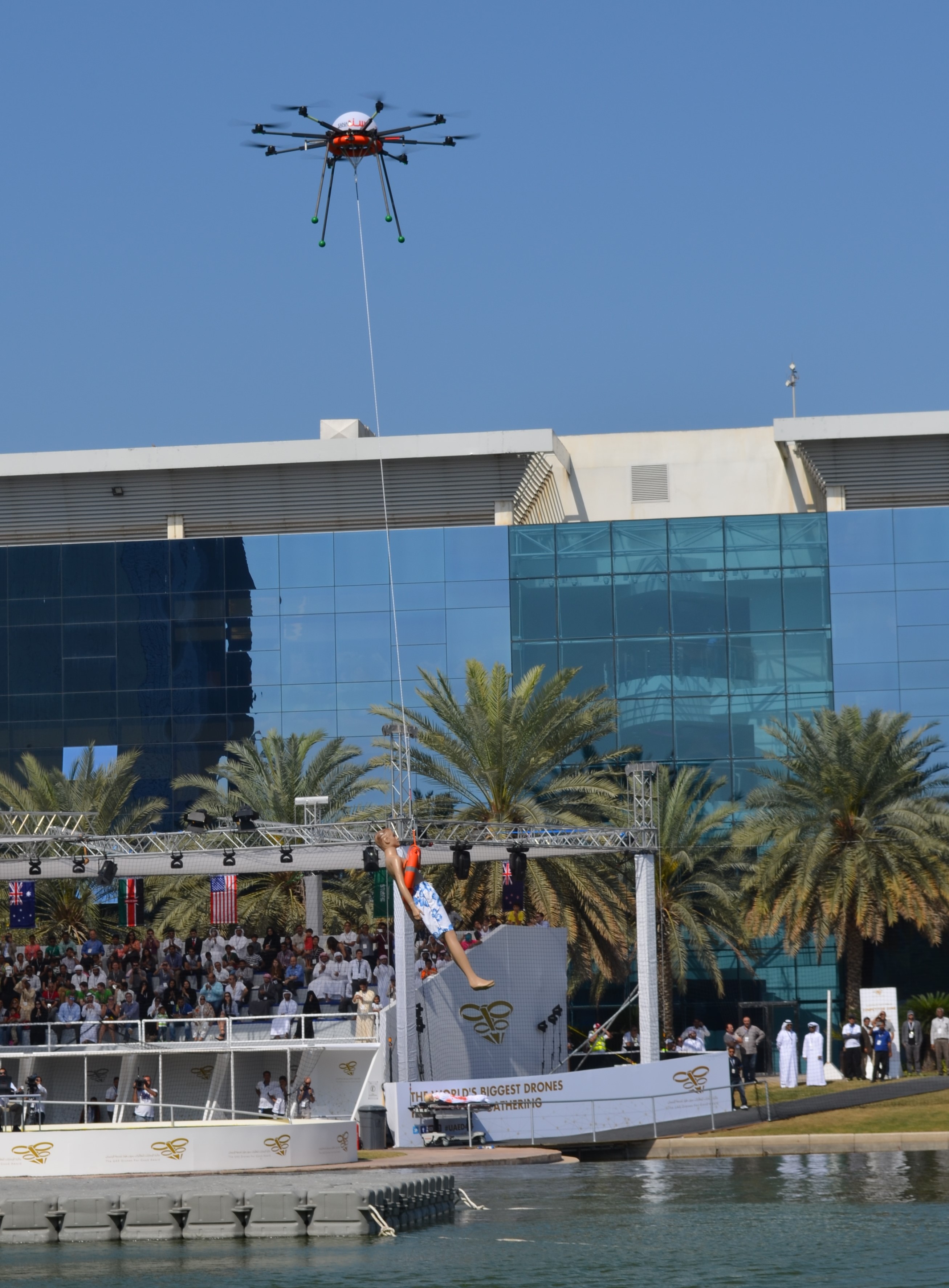 The competition’s finalists, however, painted drones as technological solutions to save lives and solve problems.

The Transition UAV, submitted by Germany’s Quantum team, is a hybrid helicopter and fixed-wing airplane that can be deployed for disaster relief by delivering water to douse forest fires.

Innova’s Dronlife, based in Spain, produced a drone that has the ability to coordinate communication between hospitals to match organ donors with potential recipients, and can be dispatched as an organ transplant delivery system.

By all accounts, the UAE is taking a lead in shaping the framework for the development of drones for civilian use. “The UAE has taken the lead in what, in my mind, is truly visionary,” Kumar said. “The UAE government has shown a lot of foresight and has set the bar for innovation. A year ago the prognosis on drones was quite mixed, but today there is social acceptability and the coolness factor has gone up.”

According to UAE government estimates, the economic impact of the drone industry is estimated to reach $8-10 billion; the industry is also anticipated to create over 100,000 jobs globally by 2025.

In order to take full advantage of the burgeoning opportunities, however, the UAE will need to address the same legal dilemma that governments and regulators all over the world are wrestling with: the establishment of clear regulatory frameworks for the manufacture and use of drones in a non-militaristic capacity, said Patrick Meier, director of social innovation at Qatar Computing Research Institute and event judge and keynote speaker.

“When there is new technology, you innovate, the regulation falls behind…. We need to include all of the necessary actors in the conversation, including policymakers, and make them a part of the solution,” Meier said.

“This competition is brilliant — typical Dubai,” said Fadi Ghandour, event judge, founder of Aramex, and Wamda chairman. “The importance of the competition is not the competition itself, but that it identifies the people that are sitting on the sidelines that might never be noticed. The competition attracts people who are innovating in their garages and gardens.”