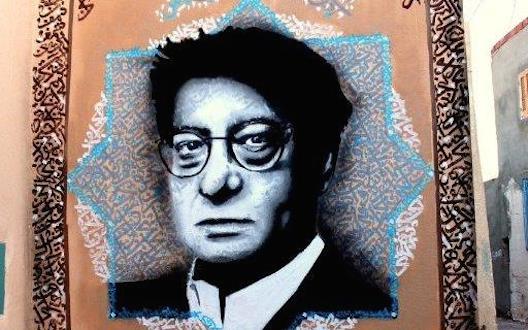 Last September, the Tunisian island of Djerba was at the heart of discussions of art lovers across Europe and elsewhere. The island, known for its beauty and beaches, has been transformed into a huge open-air museum for the Djerbahood.

In a talk with Wamda, Ben Cheikh lets us in on his entrepreneurial journey, the establishment of his own gallery, and the inspiration that drives him.

Wamda: Tell us about Galerie Itinerrance. How did you found it?

Mahdi Ben Cheikh: For me, being an exhibitor isn’t only about selling. It’s much more than business and trade, it’s about promoting a movement. The world has seen many prominent gallery owners who changed history, such as Daniel-Henry Kahnweiler who [fostered] the cubism movement which revolutionized painting. Those people started businesses and companies just like people do these days.

When I founded my own gallery in 2004, it seemed clear to me that street art had an important place in history and that I had to devote my full energy to it.

I didn’t enter the field to buy and sell art. I knew that I should rather adapt to the movement I am promoting and practice my profession in a sophisticated manner, bringing to artists what they need without damaging their art. My goal is to find an innovative and creative concept every time. [This is what I’ve done] by organizing big events and shedding the light on street art, resulting in Street Art 13, Paris Tour 13, and now Djerbahood. 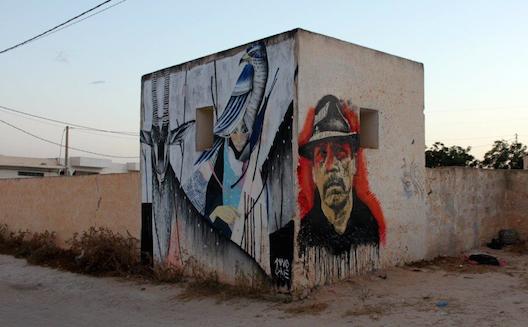 Wamda: How did you get the idea for Djerbahood?

Ben Cheikh: After the Paris Tour 13 project, I thought about doing something in Tunisia. The latter is part of me and I spend my time between the two countries.

I also wanted to benefit from the support of my Tunisian communities and to merge it with modern practices, which resulted in this terrific combination. As a Tunisian, I was really happy with the result, and the movement proved to be adaptable everywhere.

Djerba seemed the perfect place for street art. [As an open-air space], the museum will not damage the island. The place had real artists and amazing creative designs. We bought for instance many street lights.

Wamda: Was this project something you would have considered before the revolution? 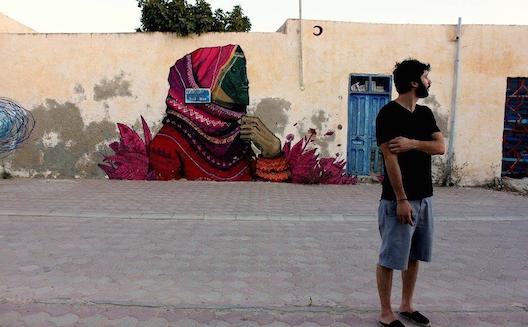 Wamda: How have you funded your projects?

Cheikh: I established the gallery ten years ago, right after I finished college. I left Tunisia without any clue about what I was going to do next. I started the gallery next to my work as a visual arts teacher and I funded it with my salary. I managed to survive four years this way. Then, bit by bit, the place started paying for itself. It was necessary to wait until the gallery became known.

Djerbahood came as a result of repeated requests of people I knew. Having studied in a French school in Tunisia, I had ties with wealthy people in Tunisia who helped me by giving me a bit of money out of their sense of patriotism, believing that it would help give the country a good reputation. This help was a strong dose of oxygen for me. However, I didn’t get anything from the government. The Ministry of Tourism was supposed to cover some bills but we’re still waiting.

Wamda: How do you monetize your projects if they’re free of charge?

Ben Cheikh: In my gallery, I sell art pieces. However, everything I do outside in collaboration with artists is non-profit. It’s just art for the sake of art. Besides, as you see, Djerbahood is held in the streets, and Paris Tour 13 was open to all. It wasn’t necessary for this project to be super profitable, and on another hand, the event, although very simple, had a big impact. This was evident through the interest that people showed in the exhibition, as we sold 3,500 pieces online. Communication is the most important thing we gained out of this experience.

Instead of investing 50,000 Euros in a worldwide exhibition for visual arts or contemporary art and being one of 150 exhibitors there hoping to sell three pieces, I am investing this amount in one event and selling 1,000 to 1,500 pieces at once. And the thing that has the largest impact is the new way I am promoting street art.