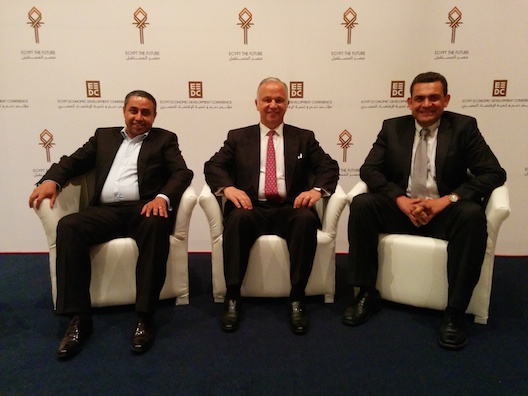 Sawari Ventures partners: Hany Sonbaty, Ahmed Alfi, Wael Amin.
Egyptian venture capital company Sawari Ventures is turning its eye to North Africa with the launch of its first venture capital fund.
The $50 million fund was announced during Egypt's economic conference in Sharm el Sheikh over the weekend, and will close at the end of this year with first investments coming in early 2016. Over the four year investment period the Sawari Ventures Fund I will invest in 12 to 15 growth-stage technology startups, in the range of $2-3 million each, in Egypt, Tunisia and Morocco.
Sawari Ventures partner Wael Amin told Wamda they were planning to make 70% of the investments in Egypt, as it had a bigger pipeline of startups coming up through the ranks.
The focus for Morocco and Tunisia will instead be on developing the entrepreneur ecosystems; to do this up to 15% of the fund will be spent setting up Flat6Labs branches in Tunis and Casablanca, as well as support the original accelerator in Cairo. Investments won't be limited to accelerator graduates, however.
Amin says the first cycle for the Tunis accelerator is expected to be in the first quarter of 2016, with Casablanca following soon afterwards.
"These are the countries where there are many, many more entrepreneurs than money," Amin said. "We think it's going to have a tremendous impact, because today we see the companies coming out of Flat6Labs in this market and there's no capital available to growth stage startups. We're planning to get deeply involved in these markets."
Sawari is talking to potential partners such as the African Development Bank and Microsoft, as well as investment and corporate entities to both invest in the fund, and help to develop the startup environments in each of the countries the fund will target.
Amin says they received "a lot" of interest during the Sharm el Sheikh conference from institutions, but from no high-roller individuals yet.
Sawari Ventures and its accelerator Flat6Labs have invested in 70 companies and more than 100 entrepreneurs across Egypt, Saudi Arabia and the UAE. "In this short period our companies have won countless global awards, generated hundreds of jobs, filed dozens of USPTO patents and raised several rounds of follow on investments from marquee global investors."