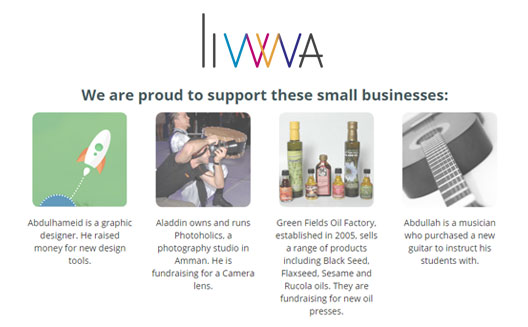 liwwa, the Amman-based peer-to-peer Sharia-compliant lending site, has closed a seed round led by DASH Ventures, with participation from Jordan’s Bank al Etihad and MENA Venture Investments. On a call today, CEO Ahmed Moor declined to release the amount of the round, but revealed that liwwa will use the cash to hire several new team members, including an underwriting team, and support a new product offering to be released in the “next few weeks.”

The company was launched in November 2013 by Moor and CTO Samer Atiani to address one of the major problems they see as facing the region in terms of development: “extremely low financing rates, [which make] it very hard for small businesses to get a loan,” Moor told Wamda at the time. A report published last year by the World Bank and Union of Arab Banks set the finance gap at up to $240 billion.

At launch, the company was focused on helping individuals and very small companies procure “income generating assets,” like a delivery van or a video camera. A partnership with Jordanian ecommerce site for musical instruments Feesheh, helping individuals purchase expensive musical instruments, has demonstrated this small-scale focus. The Feesheh partnership was also successful in expanding liwwa’s pool of qualified potential beneficiaries, the availability of whom Moor cited as a challenge for the startup about six months after launch.

To date, liwwa has facilitated around 20 loans, some of which are still in funding stages, for a total of $100,000.

Moving forward, “our focus will be more on the industrial sector,” the CEO tells Wamda. “We’ll be working on partnerships with all kinds of suppliers: industrial, construction machinery suppliers, suppliers of medical equipment.”

The focus on later-stage SMEs seems to suit the investors party to the deal. In a press release, DASH Ventures managing director Omar J. Sati, and MVI investment manager (and Wamda alum) Fares Ghandour stressed the importance of SMEs for the development of regional business.

“Access to finance is a major challenge and hindrance to growth for many of these businesses which represent an enormous market,” Sati said.

Bank al Etihad general manager H.E. Nadia Al Saeed went on to emphasize the role to play by liwwa and other support vehicles: “Providing [SMEs] with the support and lending facilities they need to grow is crucial. [Bank al Etihad] is delighted to collaborate [with investment partners] to help liwwa in advancing Jordan’s dynamic SME sector.”

Moor is hopeful for the future of his business, especially in light of this vote of confidence from investors. “I’m hoping liwwa will catalyze job and income growth for lots of businesses and lots of people – that’s what all this effort is for.”