The MENA region is one of the fastest growing gaming markets in the world - for game developers - and is expected to reach $3.2 billion in 2016.

The region has witnessed increasing interest from big game developers and publishers, from Ubisoft setting up shop in Abu Dhabi and looking to localize some of their most popular titles, to other global developers seeking to forge connections with local players at events such as the Dubai World Game Expo.

However, such an untapped market does come with challenges. Wamda Research reports that only 4% of regional companies that labeled themselves as belonging to the gaming industry were funded by VCs (although this may also be affected by angel activity). In addition, although the region seems to host some very hungry consumers, game producers are limited. So what’s the deal? Why aren’t we moving?

At last week’s MENA Games conference, the first of its kind to address the sector in the Middle East, the region’s known players, as well as international developers and publishers, gathered to give a diagnosis on opportunities and challenges. The general consensus was that a synthesis within the industry, as well as an effort to bring the community together, is much needed. 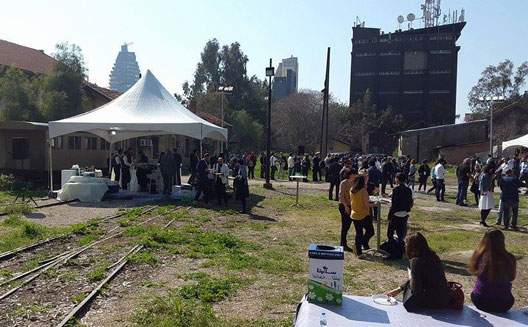 MENA Games was hosted at the Beirut trainstation in Mar Mikael, Beirut.

The conference, organized by IFP Group with the support of game publisher Play 3arabi, was hosted at the historic Train Station in Beirut's Mar Mikael, kickstarted with the first regional edition of the Arabic Game Jam competition (more on it this week on Wamda), and offered a program with panels, talks, and workshops, featuring some of the world’s notable gaming industry players (Ubisoft, GameForge 4D, GameFounders, and International Game Developers Association (IGDA) were some of the names). Below are the main insights.

What it’s like to develop games in the MENA

With the market seen to be fragmented, Falafel Games CEO Vince Ghossoub, feels the differences are significant enough that it cannot be considered as one holistic market: “People in Gulf will have different tastes from those in North Africa; disposable income varies across the region and there is significant fragmentation of the product landscape.” So if the product is consumed largely differently across the region, how does one approach development?

The panelists agreed that content had to come from the region. “People from the region can use the culture of the region to develop their games,” says Baris Özistek, CEO of Netmarble EMEA in Turkey. There is, however, a “huge lack of talent”, as pointed out by Abdullah Hamed of Lumba, Inc. in KSA: “Anyone who was good left a long time ago, and we want them back. There is a big role for educational institutes to play. Foreign companies can come to the region and hire these people.” Along with the lack in talent, Tamatem Games’ CEO Hussam Hammo pointed out that monetizing, and general education and knowledge about developing games are the major challenges for the regional gaming industry. 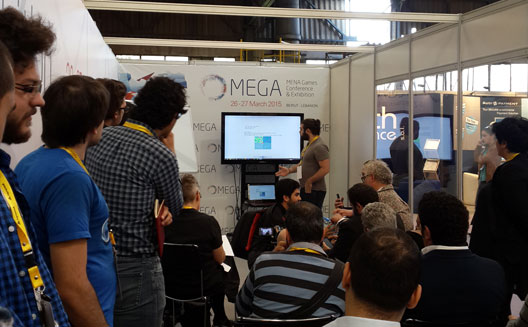 But not everyone agreed; Joseph Shomali, whose engagement in the industry dates to at least 2005, and currently serves as CEO and co-founder of Play 3arabi, said: “I don’t think there is a problem in talent, I think there’s a problem in connecting talent,” - something the conference itself was looking to address.

Lack of data is another challenge. Lumba, Inc.'s Abdullah Hamed gave an example: “In KSA, there are two games and those games got downloaded over one million times. They’re only making $3,000 a month out of it. They’re getting the reach but not making the money, and that gap of info that stopped them from making the money is something we should push for: help them collect their own data.” Educating some of the players on the importance of data could help break the taboo of the perceived disadvantage of sharing data, and highlight the benefit of extracting lessons.

Although online payment seemed to come up as an issue, Hamed offered a different perspective: “Most high paying players already have credit cards and those that don’t have relatives that do. If your game is highly engaging and targets the culture well, people will flow because people are hungry.”

Everything seems to point to the fact that in order to develop, the industry needs to see “more activity” and collaboration, giving both its producers and consumers more experience and familiarity within the region. 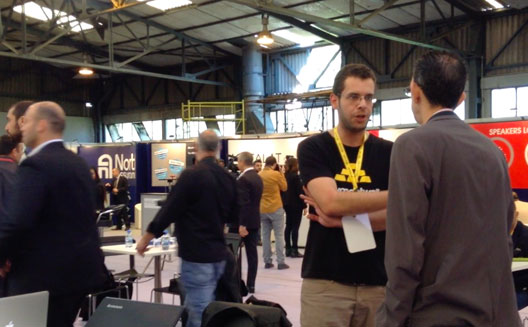 Participants chatter in the exhibition area.

Given the presence of foreign players at the conference, a question revolved around plugging into the region. And the consensus? Your game needs to speak and breathe the region - and not in the stereotypical sense.

For Hammo, as long as the content is developed in the region, the origin of the team doesn’t matter: “It is important to develop in the region. I don’t care about the code itself, they [the programmers] can come from elsewhere but the content has to come from here.”

Hamed points out that no matter where you are developing your game, it is important to have direct links to the market to get feedback. He added: “It is important for people in the region to create their own content and export their stories abroad.”

Considering the paying and nonpaying consumer is also important. Fadi Mujahid, CEO of Game Power 7 explained: “The nonpaying motivates the paying player. Our marketing extends to both equally in the Arab countries as long as there is some payment there.” He added that the main trap producers seem to fall into is to favor the Gulf, and forget about other regional markets. “This creates a bubble at the start in payment and then the game collapses fast after that, so people are playing but there’s not competition for the games.”

But not all games need to be localized and culturalized. For Mujahid, the simple games can be played in any language, for him it’s mostly the MMORPGs and Real-Time Strategy games that need consideration.

Former International Game Developers Association (IGDA) Executive Director, and now CEO of Montréal-based Execution Labs Jason Della Rocca, outlined the importance of focusing on building a company, rather than just that one product: “It’s building scaffolding that will help you get on.”

Play 3arabi’s Shomali jokingly branded himself as an “expert on failure,” a healthy exercise for the sake of learning. He noted that “nobody cares about ideas, not until you’re successful, it’s about execution.” Tobias Sjögren of Paradox Interactive, also on the panel, highlighted the importance of clarity within the company when it comes to making decisions. 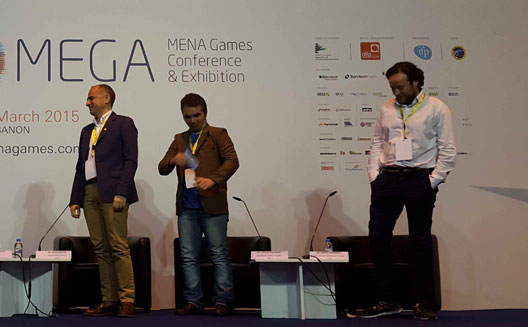 Bariz Özistek, Hassan Mehdiasl, and Mario Baumann on the 'An Overview of New Gaming Markets' panel (picture sourced from their Facebook group).

As important as it is to look within the region and how it can improve the gaming sector, there was also a chance for attendees to look at other emerging gaming markets. Looking specifically at Iran, Turkey, and Brazil, panelists talked about how games that were necessarily adapted to a specific culture tended to perform well enough in a number of emerging markets.

Mario Baumann, Director of Business Development at UOL BoaCompra in the EMEA and SEA regions, shared: “When I look at Latin America, client-based games are huge but the issue with the mobile market is that monetization doesn’t exist.”

For the Turkish consumer, Netmarble EMEA’s Özistek stressed that games have to be in Turkish. “Only about 15% of the population can speak English but the mass market doesn’t speak a word [of English],” he explained. What is currently working is platform, PC, or mobile, with the market showing a 14%, shift to mobile.

Games are usually easy to translate to Persian (think slang, too), claimed Hassan Mehdiasl, CEO and founder of Sourena Game Studio in Iran. The challenge lies in making the content interesting to the local consumer. Although it’s still more of a closed market, he added, it is definitely an interesting one when you have a population of 80 million, most of whom are under 35. “Persians are nationalists,” he said, “they care about the story and what you’re saying in the game.”

When it comes to building games for, or expanding into any of these three markets, Özistek framed it well, saying that there is no success “without understanding the local culture, its needs and how to promote the game.”

Payment also remains a major challenge. In Brazil, international credit cards are blocked and the Google Playstore isn’t making money. “The only way they can buy is to get a prepaid card,” explained Baumann. Having local partners makes it a lot easier (especially when it comes to localization), but was not mandatory for all panelists, except for Mehdiasl. In Iran, it can be very tricky to localize your content and there’s no getting around partnering with a local establishment. In addition, to publish and get paid for a game, you need a license. 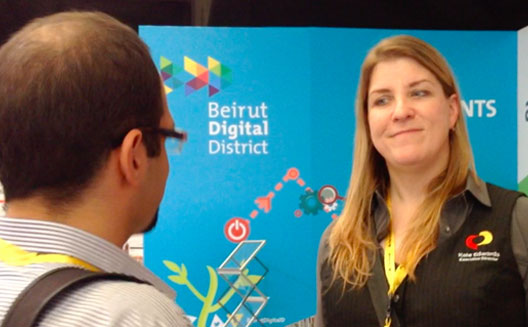 IGDA's Kate Edwards chats with one of the participants.

At the end of the two day event one thought came to mind: if there were more established developers, producers, and solutions providers in this first pilot of the conference, it only speaks to the kind of support the industry can hope to depend on. As Kate Edwards, IGDA’s current Executive Director said: "It's important for game developers to be connected together as a collective group." So, let’s start by strengthening the bonds within the community, and the industry can take it from there.

A MENA Games organizer indicated that two deals were made at the conference, one of which involved the sale of a game to a regional businessman who has long been looking to get into the gaming industry. We will have more as this story develops.

Stephanie Nour is Community Manager at Wamda. She's an avid reader, a big fan of music, and loves discovering startups and testing new apps and platforms. Connect with her on Twitter @stephanienour, Google+, LinkedIn, or by email at stephanie[at]wamda [dot] com.