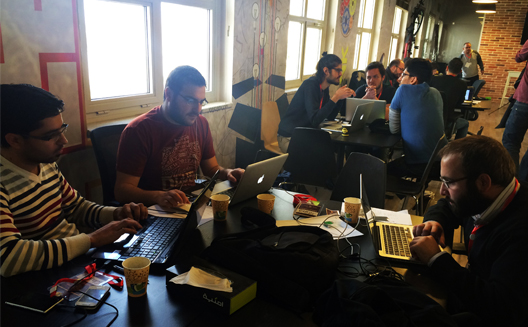 The developers of Edy, an iOS app that blends the creative photo sharing elements of Instagram with the DIY work of online marketplaces like Etsy, won first place at the first ever RedTroops’ JO Hackathon, which concluded on Saturday April 25 at King Hussein Business Park in Amman, Jordan.

The app allows users to showcase and sell their handmade wares such as sweets, party favors, jewelry, clothing, and other crafts.

“We wanted to create something that had more of a social network feed. It’s kind of like Instagram but for items that are homemade, and users can eventually sell the things that they make,” said Ramzi Jiryes, who developed the app with Ghassan Basrak and Adham Goussous.

RedTroops, an online marketplace that brings together app developers and in-app advertisers, challenged participants to create a fully-functional mobile application for iOS or Android in 48 hours or less. Attendees were split up into teams of two or three members that worked together from initial brainstorming to the final stages of optimization. A panel of industry experts evaluated whether the apps were useful, functional, scalable, and monetizable. First, second, and third-place winners took home a cash prize of USD $1,000, $400, and $200, respectively.

Second place went to JoBus, an Android app that assists public transportation users by displaying a current map of Jordan’s bus routes and other useful scheduling information. Team members Aseel Badran, Hamzeh Hasan, and Mujtaba Al Temeemi believe that the app will address several issues with Amman’s bus system like vague or out-of-date route information and inconsistent timing that leads passengers to wait for long periods of time, never knowing if or when a bus will arrive. 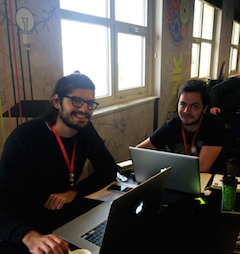 DutyMate, an iOS app that allows users to receive or accept requests to purchase items from airport duty free shops while traveling, was selected for the competition’s third-place prize. Creators Alexandre Bantz and Basel Abdelaziz saw that duty free item requests from friends and family are becoming increasingly common in Jordan due to the country’s rising prices for imported goods. “The app turned out to be something valuable that we will actually use,” Bantz noted.

“We see this as an opportunity to push developers forward,” said RedTroops founder and CEO Samer Tarazi. “This is definitely something we would have loved to participate in if we were in their shoes.”

The event, supported by Umniah, brought together app developers, designers, and programmers with a wide range of experience and skill sets. For many, it was the first time attending an even of this kind. “So far, I have about a year of experience,” said Bantz of DutyMate.

“For me, the hackathon is my first milestone as a developer, whereas it’s merely a practice session for my teammate, Basel Abdelazeez.”

For JoBus co-creator Aseel Badran, participating in such events is a way to get inspired and network. “App hackathons are about meeting others that share your passion, gathering talented designers and developers in the same place, and seeing whether or not people are actually interested in your app idea or not,” she said.