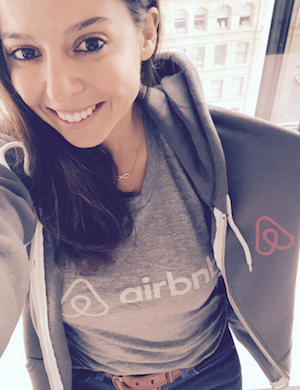 Nina Mufleh wants a job at Airbnb. Like thousands of others though, when she began her quest, she quickly found her applications and calls to the company disappearing into the ether. She knew she had to apply a different tack to her approach.

It all started a year ago with a Twitter encounter with the newly appointed chief marketing officer of Airbnb, Jonathan Mildenhall.

@ninamufleh my email is mildenhall@mac.com - send me your best you. ;)

He responded and she got excited. She sent along a proposal she believed to stand out: “I followed it up with a mock press release instead of a resume,” says Mufleh in a Skype call from San Francisco. “Got a reaction from his saying ‘bravo’ on my credentials and approach…but then the conversation faded out.” 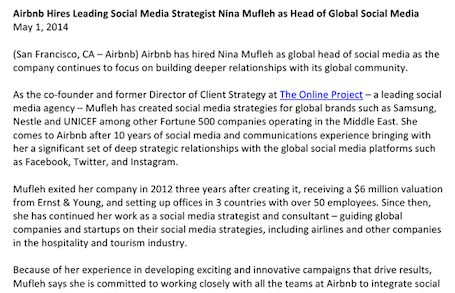 Mufleh's press release announcing herself as a new employee of Airbnb.

He’s just not that into you?

"From what I understand the sheer volume of applications makes it a challenge, around one in 500 applicants make it to a final round," says the eager job hunter. "So there is the challenge of standing out."

Standing out was something one might have thought Mufleh would have done immediately. Prior to relocating to the US in May 2014, she had been working as a marketing and communications specialist for Queen Rania of Jordan, and then in her own startup The Online Project (at TOP she was engaged with Wamda in its early days, working on social media). After the opportunity to exit came up she decided to move abroad “and take the next step."

Working as a freelance consultant while attempting to break into Airbnb Mufleh paints a picture that doesn’t seem too dissimilar to that of a lovelorn individual not giving up on ‘the one’, Mufleh says that the marketing team at Airbnb have always been very responsive to her interactions: “They were great, and I’d always get great initial feedback, ‘you’re the kind of person we want’, then nothing would translate beyond a great coffee date.”

“Once I moved to San Francisco, I began hosting to get a better understanding of the entire Airbnb experience,” says Mufleh. And this is where she had more interaction with the elusive CMO.

“I got a request from the CMO at Airbnb to host family that was visiting,” Mufleh says, “It was serendipitous. Of course, I didn’t know it was him and by the time I knew I had already booked to be away, so I didn’t get to meet him.” Despite his leaving of excellent comments on her profile, still no interview.

It got to the point where her sister took her aside to tell her that maybe it was time to “move on and find a different company” but Mufleh wanted to give it one last try.

Earlier this week this 'last' approach was a website dedicated to her cause. nina4airbnb.com almost immediately attracted the attention of the management at Airbnb.

Ok. You floored me with this brilliance. We'll set something up for us to meet. I love your smarts. Very much. https://t.co/EaIwOHSywo

Creating a report on how the global accommodation finder could further their presence in the Middle East, Mufleh highlighted the aspects of the Arab world that she felt Airbnb could utilize, such as the natural hospitality culture of the region, as well as the plethora of events in coming years, such as Qatar hosting the World Cup, and various festivals that increase the need for accommodation. 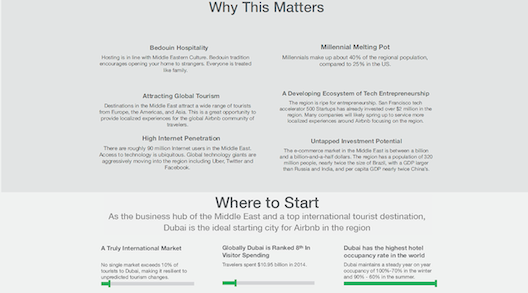 Airbnb set up a meeting with Mufleh and shortly after speaking with Wamda she could report back that it went well “and there are follow up interviews scheduled.”

So is the entrepreneurial approach to resumes and job hunting the way forward? Please let us know your thoughts in the comments section below.