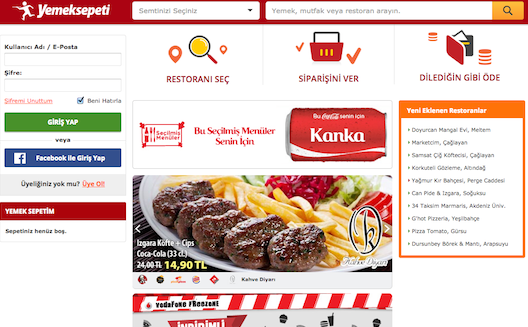 Not only is this the biggest acquisition of a company, to date, in the Middle East, but it is also the biggest within the online food delivery sector, globally.

According to Delivery Hero, who in March of this year took over Kuwait’s Talabat.com (formerly acquired by their main backer Rocket Internet for a then regional record $170 million), they are now a global market leader in online food delivery.

“We have looked at many businesses in our industry around the world but we have rarely seen KPIs as exceptional as those displayed by Yemeksepeti,” said Delivery Hero CEO Niklas Östberg in a statement issued today. “Customer cohorts and reorder rates are among the best in the world and far superior to those shown by our listed peers.”

Delivery Hero first entered the MENA market in March of this year, with their takeover of the Kuwaiti talabat.com, which until today, was the largest acquisition the region has seen. Delivery Hero has now acquired a major competitor in the Middle Easts’ food delivery market.

A big move for the region

Not only is this a notable move within the sector, it is a boon for the region and it’s contribution to it.

Yemeksepeti, who has been a market leader in the region for more than five years, has grown with the help of regionally based investors such as Wamda Chairman Fadi Ghandour’s Mena Venture Investments (MVI), who contributed $44 million alongside US-based Atlantic partners in 2012.

They first entered the region with foodonclick.com, last year they acquired a majority stake in Jordan’s ifood.jo, and their sites operate in the UAE, KSA, Lebanon, Oman, Qatar and Jordan.

Earlier this week Hellofood, another of Rocket Internet’s companies, and so now, no longer a competition for Yemeksepeti, concluded a round of $100 million, bringing their total of the year thus far to $210 million.

"During our 15 year history we have had many approaches from global and local investors however we were waiting for the right time and the right partner,” said Nevzat Aydin, CEO of Yemeksepeti in the statment. “Today, I am delighted to team up with a company whose global ambitions, corporate culture and way of doing business are so aligned with ours. We are very excited to leverage our 15 years of know-how and innovative business approach to new regions with Delivery Hero.“

Founded in 2011 Delivery Hero is already a billion-dollar company with backing largely from Germany’s ecommerce company Rocket Internet (they own 39 percent of the company), they have “the world’s largest food network of 100,000 restaurants”, according to their site, and employ 1,500 people across 29 markets.

And further expansion? Delivery Hero told Wamda that for the moment it wasn’t in their plans and that the focus for now was the consolidation of existing markets, as well as growing a strong product leadership.