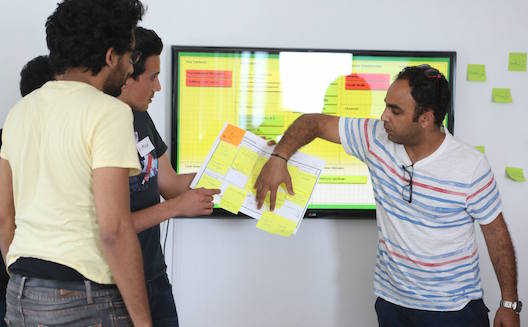 Getting down to business. (Images via Cogite)

Tunisia’s young gaming community came together from May 1st through 3rd at the Cogite coworking space for Disrupt!Games!, a game development and training event.

Topics ranged from how to come up with a viable idea to how develop and present a business model. The event wrapped up with a pitching session in front of a panel of four judges on the Sunday.

Much of the training focused on problem solving - creating innovative gaming solutions to people’s day-to-day problems.

According to Hivos' Mideast Creatives website, “games have a tremendous power to disrupt how we engage, learn, and – of course – play.”

“There have been so many different ideas during these days,” said Andra Iacob of Hivos, organizers of last November’s Disrupt!Media!. “Anything from how to solve problems like waiting in line to collecting trash - It’s been very impressive. The goal is to support good ideas and encourage them,” she said.

The judges looked at how well the participants are trying to answer a special demand and solve a task, said Karim Sehnaoui, an event judge. “We encourage them to challenge themselves,” he said.

On the first day all participants played a game where they were challenged to clean the neighborhood. They gained points by collecting garbage (1 point for a plastic bag, 5 points for a plastic bottle and 10 points for a full litter bag). Those points would not only help them ahead in the pitching contest but determine what they would get for lunch -the best ones would get grilled fish. 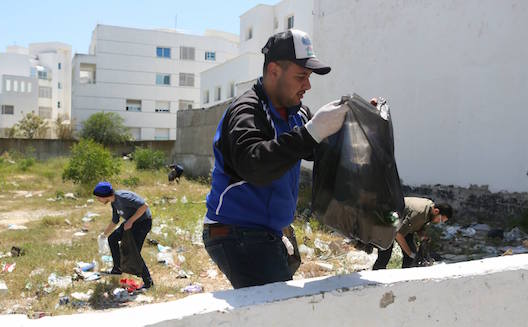 Picking up trashes can teach a valuable lesson.

After 20 minutes the participants had collected 50 bags of garbage. “We wanted to show the power of gamification. If you can motivate people to enthusiastically collect trash then you can motivate them to do anything,” said Walid Sultan Midani, one of two coaches and founder of Digitial Mania, the first digital game developer company in Tunisia.

Together with another other coach, Adel Beznine, cofounder of Boost, an upcoming seed accelerator, the two guided participants through workshops from transforming a business idea into a business model to pitching it successfully. The participants also received one-on-one training in-depth knowledge of game methodology, like how games are designed with systems of merits and rewards.

Finally on the last day, the jury rewarded KidzLearnMate, an interactive app with colors, photos and sounds for children with disabilities like down's syndrome or autism. 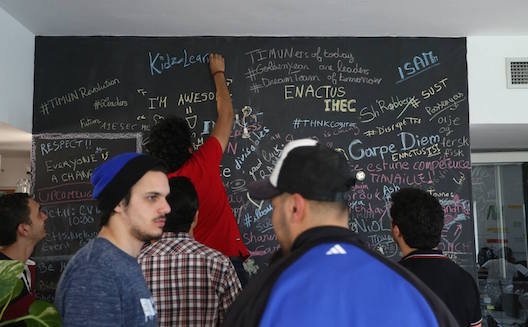 It's all about gamification

“We’ve received a deeper understanding of gamification,” said Aymen Belarbi, one of the members of the winning team. To him the concept of gamification is about bringing a game into our daily life routines, making ordinary and sometimes challenging life tasks fun.

Faouzi Ghodhane, 25, a student from the Tunis-based tech university Esprit, explains the concept of gamification as the usage of games that will make its users solve a day-to-day problem.

He and his team have made a game focusing on re-cycling called “Green City.” The idea is to change the mindset of its users. The target group, which is mostly children, are encouraged to enjoy and appreciate keeping its surrounding clean by rewarding them with points when they recycle or throwing away garbage.

During the event, he learned not only how to formulate an idea with clarity in front of a panel of investors but also the importance of body-language when pitching an idea.

“Before you begin you have to specify a problem,” said Ahmed Abidi who together with his team mates have created an educational game for kids to increase their knowledge of chemistry. The problem they seek to solve is children’s poor knowledge and its low quality of education. “Emphasize on the fun part and not the money,” he added, “because money will follow.” 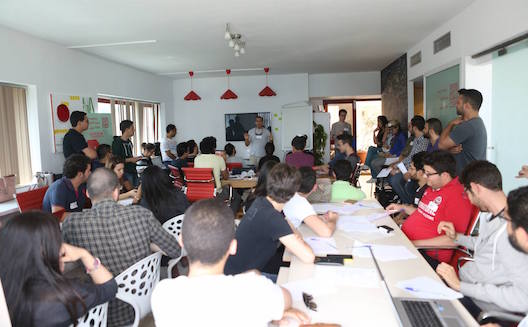 Hard at work during Adel's workshop.

To 24-year-old Mehdi Hassen the most important lesson learned from the three-day training has been how to go from being at the idea stage to creating a business. “Always work in a group,” he said. The entrepreneur is pitching a game idea that focuses on treating different types of anxieties by highlighting the benefits of having people around you to discuss and solve problems with.

The networking part of the event has been important too, said Belarbi and added “If you hear of an event, just go.” Do not hesitate, grab any opportunity because you never know what it may lead to, he said.

“We want to create a strong gaming community here,” says Midani, who was coaching the participants throughout the weekend. He said he was impressed by the participants’ development, some of who started from scratch and showed significant progress.