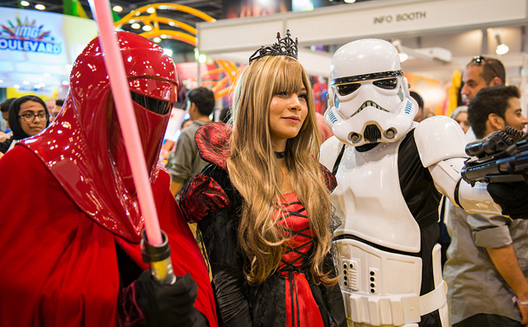 The force is strong in these ones (Image via Flickr)

On the occasion of Geek Pride Day, we take a look at geek culture in MENA and see how a passion for pop culture and an entrepreneurial vision led to one of the region's fastest-growing events.

The Middle East Film & Comic Con is the region's answer to the highly-popular comic book convention model, such as San Diego Comic Con, an annual celebration of all things pop culture: comic books, movies, video games and more. The Dubai-based event first launched in 2012 and attracted some 15,000 loyal fans from across the region.

It was a huge hit. For the first time, MENA’s geek community had a place to meet, mingle and partake in their common passions through cosplaying (dressing up as some of their favorite pop culture characters), gaming tournaments, and other activities. They also had the opportunity to meet international artists and celebrities from the worlds of film and television. And of course, walking out with bag-fulls of products from regional and global retailers exhibiting at the event, offering everything from comic books to collectibles.

Attendance this year skyrocketed to around 55,000 true believers.

MEFCC is the brainchild of ExtraCake P.R.A, a Dubai creative agency specializing in advertising, design and events among other fields. We spoke to ExtraCake's Director of Public Relations Arafaat Ali Khan on the origin story of MEFCC (no radioactive spiders involved) and the impact the event is having on geek culture and entrepreneurship in the region.

Wamda: How was the idea for the Middle East Film & Comic Con born?

Arafaat Ali Khan: We [ExtraCake] are all geeks, and it just so happened that we all had the same thoughts in our minds. There was that click, and all of us kind of looked at each other and went 'Hold on: we do events, we do creative and advertising and we do PR, so why don't we do it?'

The seed of it was our craziness and our passion to want to do something like this in the Middle East, but there was also a business aspect. At the end of the day, we are business people as well, and we did want to look at it from the business point of view.

We felt that we're geeks, we're super passionate, we collect comic books, we collect action figures, and obviously we're not the only ones, because there's more and more of this coming up in our region, and we wanted to be a part of it and to foster it. 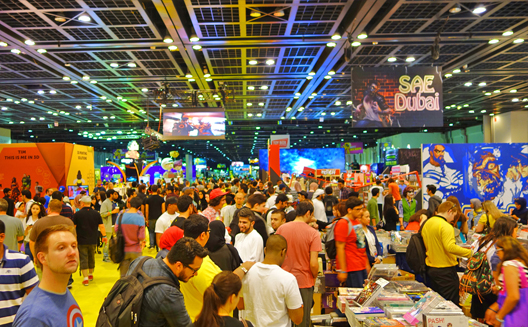 Wamda: How did you approach sponsors about taking part in such a risky niche project?

Ali Khan: It was a hard sell. We put together a very professional sales deck with various sponsorship opportunities and exhibitor opportunities, but the difference here was that we very much focused on the demographic [geeks], a demographic which was more difficult at that time to reach.

They've got spending potential, they're very loyal, and they're very opinionated. They know what they like. We thought a comic book convention would be the perfect opportunity for businesses who want to connect to this target audience. Our proposal was this: We are literally creating a platform that has never existed before.

The main feedback we were getting back in 2010 and 2011 was 'What are you guys talking about? Comic con? Comic books? There's no scope for this in the region.' It was disheartening when we felt so strongly about it. Very big companies that targeted the youths were saying to us 'Oh no no no, this is not our target demographic.' However, in 2012, we had the support of Samsung. They were one of the brands that did get it. They were like 'Yeah, this is the mindset that we want in our demographic,' these geeky, funky, early-adopters. 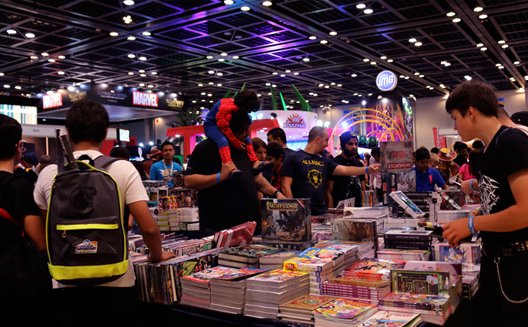 Collect them all! (Image via Dubai Culture)

Wamda: How did you go about convincing major international companies and exhibitors, like comic book publishers and artists to come on board?

Ali Khan: We knew that we needed to get them [comics publishers] here in some form, so that they could experience and understand what the market can bring and how passionate it is. What we pitched to them is that we would bring down one of their artists to the event, and they do their thing.

This was an expense for us, but we believed that this was necessary to do in the early stages, so that they would get the feedback that we wanted them to get; and that's what started happening. Over the years, we had them coming back and saying 'Hey, this artist is very interested in coming down to your event' or 'Hey, let's work together and do something exclusive for your event.'

Wamda: What measures did you take to make the event appeal to both geeks and the general public?

Ali Khan: We created a festival vibe, where both the hardcore geeks and the people who just want to experience what this was all about would be comfortable. If you had a look through the exhibition area, it was quite crowded and you wanted a bit of a breather, you could go out, you could sit on bean bags, listen to music, watch entertainment. We wanted to give people more of an opportunity to have an experience rather than attend an exhibition. 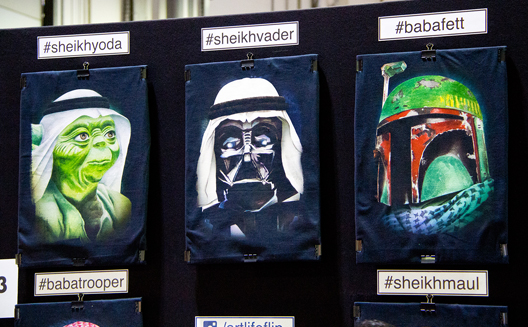 Wamda: What effect has MEFCC had on talent in the region?

Ali Khan: It gives people encouragement to do more, to produce more, and the belief that there is a market for it [geek culture], that 'I will find the backing for this.' There are a number of regional exhibitors that have started collaborating with international artists after MEFCC. I'm not saying it's because of MEFCC, but I think it's given them the encouragement.

Wamda: In the years following MEFCC, other large-scale geek-centric events began popping up, such as the recent IGN Convention in Qatar. Do you think MEFCC has also encouraged other companies to organize their own similar events?

Ali Khan: We more or less put our company on the line because we had faith in this, and when we took that first step, people saw that that stone was solid and they followed. It was a worthwhile effort for us to take that first step, and I'm sure we'll see more events come on board now, because 55,000 people is no small number. Good competition is good for the industry. If you do competition the right way, it elevates everyone. What I don't want to see in terms of competition is more of the same. 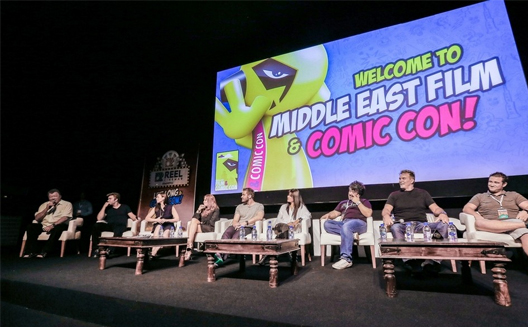 Wamda: How would you encourage artists or entrepreneurs who want to take their passion for geek culture to the next level and make it a business?

What we're starting this year are monthly workshops. We're going to be doing workshops that are going to give entrepreneurs, on an ongoing basis, the opportunity to network and to meet people and try to get their businesses off the ground. We're going have workshops on art, writing, movie production, to try and create something for everyone. 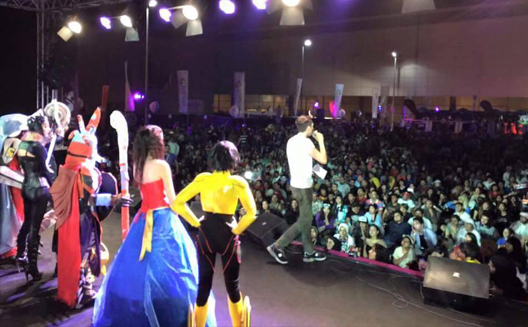 Wamda: What does the future hold for ExtraCake?

Ali Khan: We are now doing the official Games event in the region, Games 15. It's been going on for a few years and now we've partnered with the creators of this brand that include PlayStation and Xbox, among others. We are working with them now to develop the Games event for this region in the same vein as MEFCC, making it more accessible to a broader audience, but keeping that core-gamer feel.

We have some really, really awesome plans.