Jeeran, the MENA based review platform, expanded its network to Egypt this week. Based in Jordan, it's a platform similar to Yelp, where users write reviews and rate the various businesses and services in their cities based on a five star system. It allows internationals and locals alike to find nearby establishments of interest, like restaurants, ATMs, and auto mechanics among other things.

Jeeran began as a free hosting site, but pivoted in 2010 into a reviews platform for the Middle East. It currently covers close to 40 cities in the region, and its expansion in Egypt will only help grow that number.

Cofounder Omar Koudsi has been at the head of the company since its creation in 2000. Wamda spoke with him about his experiences and views about the recent expansion, and the 15 years of Jeeran’s life span. He was accompanied by Romouz Sadeq, chief product officer at the platform.

Wamda: How do you decide where and when to expand? What attracted you to Egypt?

Omar Koudsi: We actually finalized the Egypt website three years ago, but we left it inactive. We couldn’t do a proper launch because of the events in Egypt at the time.

Romouz Sadeq: We were planning on expanding in Egypt or KSA. Once the issues started in Egypt, we decided to focus on the KSA market. Once the situation was favorable again we revisited the Egyptian market and decided to do a proper launch.

Koudsi: Our expansion is done one market at a time. Now that we are in Egypt, we don’t know how long it will take us to have an impact. It might take six months for us to be satisfied with Jeeran’s influence on the market, but it most likely will take at least a year.

Wamda: How do you measure success and what does it mean to you?

Koudsi: I don’t really have a clear definition of what success is to us. Success is something that you keep up.

Sadeq: We see glimpses of it sometimes. I remember a user thanking us because Jeeran helped them find a hospital.

Koudsi: We have to work in micro-successes. Internally, it’s a need to achieve our vision.

Wamda: Tell us about one time you were close to failure and how you managed to overcome it.

Sadeq: Everyday. I don’t know of a day where we didn’t have an issue to overcome. Sometimes it’s financial, or engineering, or the community. There’s always something to deal with.

Koudsi: We do get daily threats from people wanting to sue us. Sometimes people show up at the office. Usually it’s store owners angry at us that someone wrote a bad review of their store. 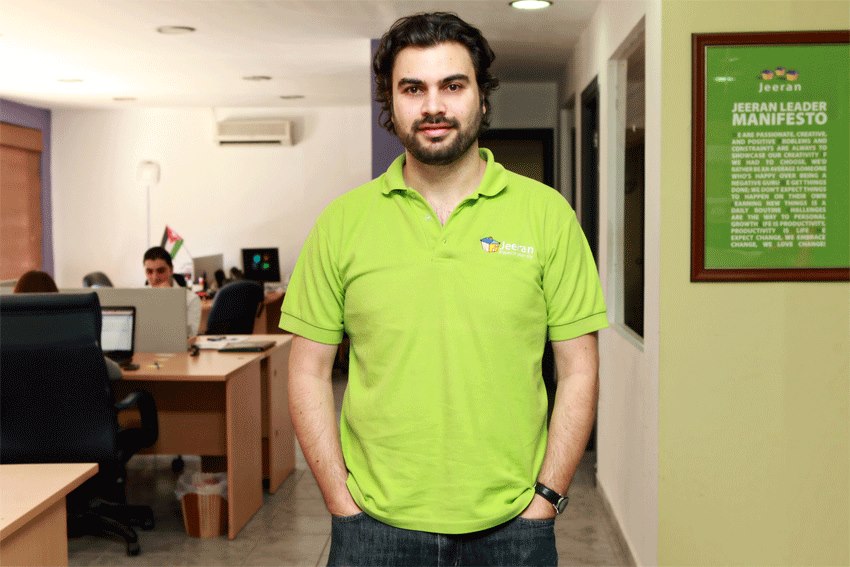 Wamda: What pieces of advice would you give to entrepreneurs today?

Koudsi: Make sure to leverage your presence. Don’t neglect what you have locally. We bring a lot of data at Jeeran to make sure we fully understand the market.

Sadeq: Startups tend to overscale when they expand. Your expansion does not have to be expensive. Don’t open new expensive offices on beach-side property. Expand responsibly and in an effective manner. Another mistake I see new startups do is sit down and wait for funding. You don’t.

Koudsi: The most critical advice I can give, is not quitting. Believe in your value and never give up. You need to keep going. The journey is never-ending, but you need to have a goal. For us, that is helping consumers better interact with the locations in their city.

This is hard. If it isn’t, you aren’t adding things of value, new things. If you ever have a doubt in what to do, go for the hard thing.

Sadeq: Recruiting and letting go of people is one of the hardest. Omar used to tell me “when people leave, it’s OK, because they leave room for new views and ideas.”

Wamda: What have you noticed in each country that you expanded in?

Koudsi: One of the things we noticed in Egypt was the greatness of the Egyptian people, how positive and willing they are to work with us. Once they understand the value of our platform, and that we work through them, with them, they give you all their support.

It was harder in Saudi. The segregation and formality of the society made it a bit more challenging. At the same time, we noticed many people wanted to contribute. We were impressed by the enthusiasm of women who wanted to participate.

Jordan is our home base and people expect more from us. They want us to do many different things, more always more.

Sadeq: At the start, people are confused. They are not yet fully introduced to reviews. When I talked to people, they were shocked you could write negative reviews. People don’t really know how to write reviews initially. Now, we are surprised by the variety of users we have. For example, a lot of women in their forties use Jeeran, they are attracted by the variety.

Koudsi: Yes. Write reviews, make your views count and make them known on the right platform.