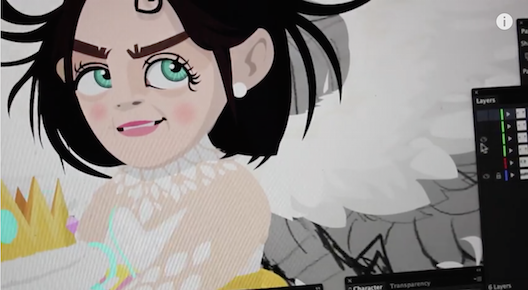 Still from the Aurora game. (Image via Wixel Studios)

Despite a growing tech-healthcare sector - which by now has hundreds of apps, wearables, robots and sensors - potentially terminal illnesses, like cancer, are still major concerns.

But one pair of Lebanese entrepreneurs has cancer in their cross-hairs with Aurora, a superhero video game in-the-making that gives children with cancer a league of personalised “avatar” superheroes and weekly educational stories and games.

Young cancer patients can chat with each other and send their scores to a friend in treatment as “positive thoughts” and signs of friendship and support. Online streaming will also connect children in isolated treatment centers with the outside world.

“We are creating something much bigger than a game,” said Ziad Feghali, cofounder of Aurora. “We’re designing a virtual world of support, a strengthening thought-system for children battling cancer.”

Aurora is not the first game project for cofounders Ziad Feghali and Reine Abbas. The husband-and-wife team founded Wixel studios several years ago. They are currently trying to raise $120,000 on the indiegogo crowdfunding platform to cover the programming, animations and marketing for Aurora. The campaign has raised $1,140 so far.

The duo was inspired by an eight-year-old relative of Abbas who lost her battle with cancer.

“We had previously designed a game as a birthday gift for our six-year-old son Ziad, who wanted a superhero character. He then asked us to design the same game for Diamand when he saw she was in pain.”

This got Abbas and Feghali thinking. How can a game help a young child afflicted with cancer?

“Children with cancer don’t have a social life,” said Feghali. “Their life is divided between home and hospital. We thought they really needed more social interaction.”

The couple then put their effort into designing all the socially interactive features of the Aurora project and expanded their vision to the core of the problem: finding a cure for cancer.

They developed a business model for Aurora where 60 percent of all revenues will be donated to active research centers with “previously proven attempts” to cure cancer, with the remaining 40 percent dedicated to making Aurora a stand-alone project with its own business model in the future.

“We plan to partner with international cancer research centers all over the world,” says Feghali enthusiastically. “We have already approached several in the UK and the US; and we want the reach of of Aurora to be global.” Ziad is confident that Aurora’s revenues will generate “2,3,4 million dollars for cancer centers.” The subscription fee for users will be $1.

As cancer continues to spread and devastate more people, similar gaming initiatives sprang up abroad. Play to Cure: Genes in Space is the world’s first mobile game that allows users to actively analyse real genetic data through gaming by spotting patterns of data and “playing for curing”. In just five weeks, the UK-based game managed to analyse six months’ worth of DNA data in just one month of gaming.  Another game that’s been around for a while is re-mission, where players are virtually transported inside the human body to fight cancer using “super-powers” like chemotherapy and antibiotics.

Unfortunately, Diamand lost her battle with cancer while on her way to treatment. But the process of creating a game for her has grown into an initiative that could benefit many others. “We also have yearly assessments for the centers we donate to in terms of delivering results. This way, donations are not passive anymore, the way they are when, for example, users go to Starbucks and there’s box for cancer donations. Here users know where every dollar is going.”

Feghali and Abbas are confident they can pull off the design and graphics of the game. The real challenge, however, lies in finding reliable and trustworthy partners to execute their mission. “We’re already negotiating with an international board of directors to be in charge of the logistics. We want this to be big.”