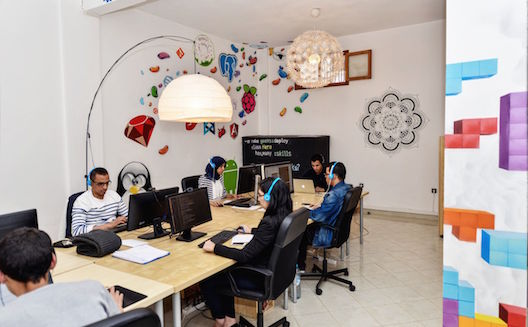 Work and play are serious business at Morocco's House of Geeks. (Image via Quentin Qip)

In this refurbished garage covered with graffiti, 11 developers are working on apps and video games. A young woman sees me and offers to introduce the rest of the team. “Here, we’re a big family,” she says with an earnest smile on her face.

Downstairs is a makerlab, a gaming lounge, a book area; on the rooftop is a terrace for yoga and reading; and  each floor has apartments for the developers.

This inspiring space is not in Los Angeles. It's in Agadir, a town better known for its all-inclusive hotels, in the south of Morocco.

This is The House of Geeks, a concept created by two Frenchmen driven by one objective: to convince the most talented of Moroccans to stay and work in their country, and to provide them with the means to become resilient entrepreneurs who will find the solutions that will could benefit Africa.

Kamel Magour, an economist-turned-entrepreneur trained in the US and China is convinced that Africa needs to innovate locally to survive.

“Tech innovation is a way of thinking, it’s a culture, a mesh of people,” he said. “This is not something you can import.”

The entrepreneur and his partner Damian Le Nouaille, who originally came to Morocco to develop their startup BuzzVibe.co, felt they had to add a social dimension to their presence in Morocco.

“The goal with The House of Geeks is to help developing countries build their resilience by retaining the best engineers and helping them develop their emotional intelligence, and their entrepreneurship and leadership sense,” Magour said. 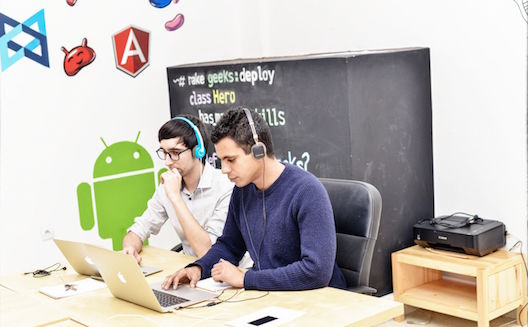 Magour, a member of Thousand Network (formerly Sandbox), trained at THNK school of creative leadership, believes that the innovators that will build the Africa of tomorrow are versatile – they know computer sciences, as well as mechanics and electronics – and are emotionally intelligent and passionate as well.

“Oftentime, you learn to turn off your brain when you get to work, turn it on when you get back to your place, until one day you forget to turn it on again,” he said by experience. To fight this loss of creativity, the Frenchman of Moroccan background put a plan together.

How to retain young Moroccan talent

A large part of Morocco’s talented graduates leave the country, according to Magour, because management style doesn’t match what they’re looking for, the technologies they use are too old, or opportunities are simply not interesting enough. And those who stay rarely get to choose jobs they are passionate about because their families need them to find a well-paying job fast.

To hang on to those talented individuals you have to offer not only good salaries, but opportunities and working conditions that are competitive with those in Europe or the US. For Magour and his partner, this means offering a geeky and comfortable house where developers can relax and have fun with others developers, and which also spares them the stress and waste of time that goes with commuting to work. 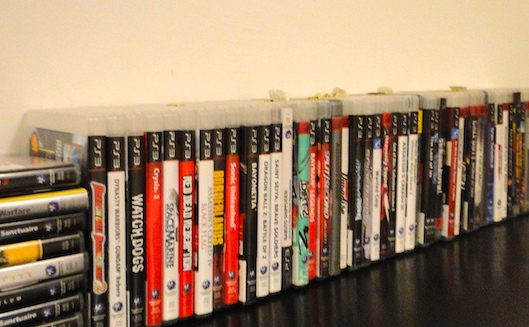 Some pretty convincing arguments to stay and work at the House of Geeks. (Image via Aline Mayard)

The duo also decided to add non-material advantages. Le Nouaille, a former freelance developer and teacher at IngéSup, a renowned developers’ school in France, is passionate about helping others develop their skills; while Magour loves to help people develop their emotional intelligence. “Damian is the perfect cofounder and CTO for the House of Geeks as he has a deep knowledge of technologies that we mix with an intuitive approach and a deep empathy,” Magour said.

“Emotional intelligence encompass empathy, creativity, the ability to understand yourself and everybody around you,” explains Magour. “Often people graduating from demanding universities have studied hard, but they haven’t lived. They don’t know themselves, and don’t understand others."

The entrepreneur has put together an eclectic library of tech and geek books, but also philosophical and psychological books that are difficult to find in Morocco. He also organizes a yoga session each week, and encourages his team to meditate and talk about their feelings.

“We do side projects to let [team members] develop their entrepreneurial and leadership spirit,” he continues. Thanks to their Arduino, Raspberry maker lab, they built the weather stations the town of Agadir was missing. They then explain how it works to children at the French Institute. 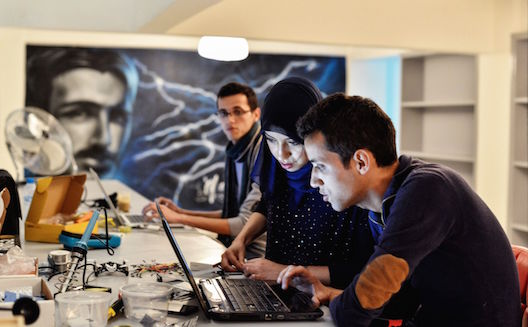 A makerspace to express one's creativity. (Image via Quentin Qip)

Helping developers get in touch with themselves though is mostly about attitudes and values. “When I quit my job, I sat down and wrote the values that were driving me,” Magour said. “For me happiness means being connected to my fundamental values. From those values, I designed a professional plan and a life project.” If this vision were to be summed up by one sentence, it would probably be this:

Those values are at the core of the House of Geeks. You can’t miss them - they were tagged on the wall in an Arabic calligraphy inspired installation by renowned graffiti artists Thamoud Melouk (FatCap), Fouad Abid and Senzo (Placebo). 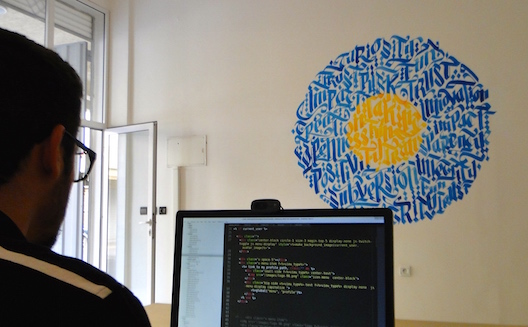 To attract and retain the best, pay attention to them

The House of Geeks hasn’t always looked as interesting and inspiring as it does now.

“At the beginning, we had only garage and were struggling to pay for fresh paint. We had two amazing employees but they had to leave due to family obligations,” Magour said.

Losing all their developers at once was harsh, remembers Le Nouaille. “We took a break, gave it a lot of thought, and then decided to move forward.” The last year internship applications flew in. “People heard we were doing great products, had nice processes, and were treating people well,” Le Nouaille said.

Magour concurred: “When you work with people who have your best interests at heart, you stay and you invite your friends to join.”

The fact that they had great products helped too, he adds. The team clearly proved that you don’t need a website or press coverage to make some noise. 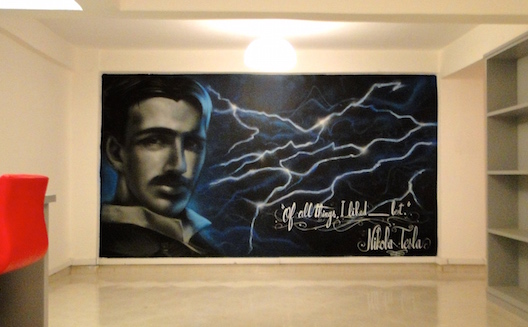 Nikola Tesla keeps an eye on the young innovators of the House of Geeks. (Image via Aline Mayard)

Downstairs, in the maker lab, is a huge painting of Nikola Tesla, Magour’s hero, an example of innovation, with a sentence that needs to be completed: "Of all things, I liked ____ best".

Magour and Le Nouaille have a hard time finding what they would write in. Talking about their vision and their inspiration moved them. I’ll leave them there, in front of this painting that sums up all their hopes for their team and the future of Africa.