Since 2006, female entrepreneurs from around the world have competed annually for the prestigious Cartier Women’s Initiative Awards, in search of international recognition and sponsorship.

This year Eman Hylooz, founder of the first Arabic digital platform for book recommendations and discussions Abjjad, tried her luck and made it through as one of 17 finalists out of 1,700 applicants. 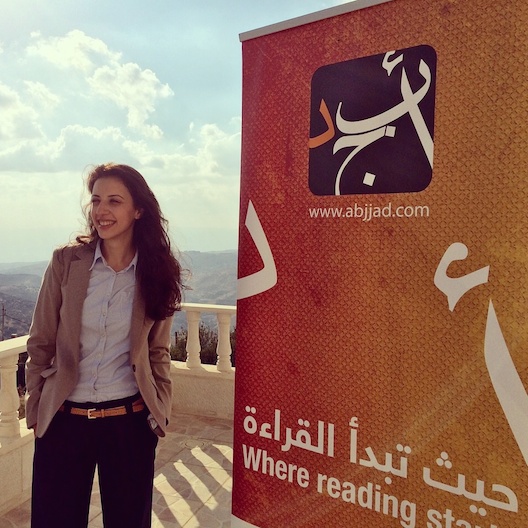 Hylooz, flying the flag for book lovers. (Images via Abjjad)

“I think that the final decision depended on the social impact of the startups and their hiring capabilities,” the 31-year-old Jordanian said. “In the end, I think we were chosen because our idea is unique and successful.”

As an ardent reader and former software developer, Hylooz founded Abjjad in 2012 after she noticed the lack of an online database for Arabic books. Abjjad, which refers to the first four letters of the Arabic alphabet (أ ب ج د), tries to fill the gap between Arabic readers, Arab authors and publishing houses.

“Abjjad is different than Amazon in that it looks more like the book-discussion platform goodreads. It’s basically IMDb for books,” Hylooz said.

Through Abjjad users can socialize their reading experience by sharing their favorite authors and quotes, and by creating their own reading list. They can then follow each other and make recommendations.

The website was an overnight success amongst Arabic readers hungry for more Arabic content online. In less than three years, Abjjad’s community has grown from 0 to 250,000 users per month and hosts more than 150,000 Arabic book titles (including originals as well as translated books from English).

Hylooz talks about creating a central platform for the region’s book worms.

For Ahmed El Moghazy, an avid member from Egypt, Abjjad gave him the opportunity to renew his passion for reading after being distracted by social media sites.

“I discovered through Abjjad a world of diverse authors and books that has sharpened my reading appetite, and thanks to which I have made some great friends both virtually and offline,” Moghazy said.

The project has also received positive feedback from Arab authors who use the website to develop and maintain their fan base.

“We’ve noticed that Arab authors are starving to have a strong online presence and that they are faster than publishers in leveraging that presence,” Hylooz said.

Based out of Amman’s King Hussein Business Park, the team has remained small – with only three full-time staff – but relies heavily on freelancers. “To get talent, you need your staff to be based everywhere and anywhere. We depend a lot on contractors for mobile app development, community management and content management,” Hylooz said.

With initial help from the accelerator Oasis500, the startup relied on crowdfunding to launch. If the company passes through to the second and final rounds of the Cartier Awards this coming October, it will receive $20,000, plus one year of coaching and media exposure. Competing alongside Hylooz, from the MENA region, are Sarah Hawilo from Lebanon and Mouna Abbasy from the UAE. 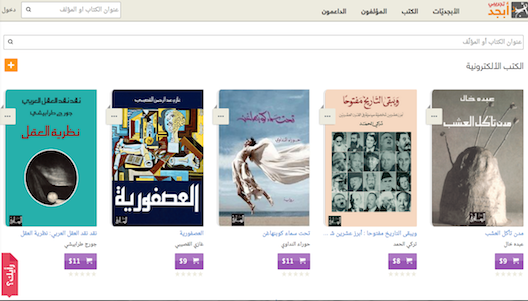 Hurdles in the market

Currently users are charged to read books on the site, however, Abjjad will soon establish ad-funded (free books with ads) e-books in Arabic. “Many of our users have been asking for this service as there is a lack of access to bookstores in countries such as Libya, Sudan and Algeria,” Hylooz tells Wamda. Online, shipment costs remain high across the region.

E-books constitute a huge market in the region that remains unexplored, according to a 2013 report by Frankfurter Buchmesse, the world’s largest publishing fair. Censorship in the MENA region is also an obstacle, leading many readers to turn to pirated books.

“The problem is that Arabic publishers didn’t tap into the market soon enough, which is why we are currently collaborating with a number of publishers to allow readers to read for free,” Hylooz said.

By the end of 2016, Abjjad plans on increasing its community to two million registered members, in a bid to increase literacy throughout the region. The company is also working on developing new features on its mobile app and making the experience as a whole more user-friendly.