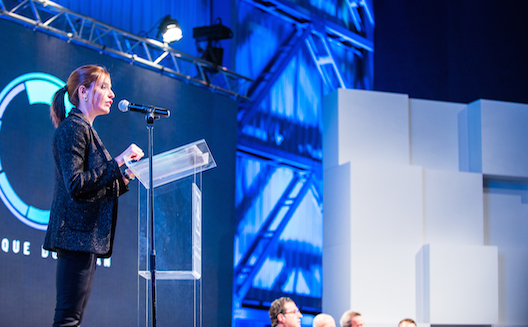 Marianne Hoayek at BDL Accelerate in November 2014. (Image via BDL)

Lebanon’s Central Bank first announced that it would be taking special steps towards aiding the startup ecosystem of the country back in 2013.

Two years on, and one year into the Circular 331’s implementation, Marianne Hoayek is the head of the Executive Office, and in turn the voice of what the central bank is up to and how things are progressing. Much to her surprise, it’s going pretty well.

Here is what she said in conversation with Wamda.

Things have gone better than expected. Much better, and faster, in fact. It has been approximately two years since the circular was launched and so many positives have occurred since then.

It’s important to note this is not a loan. This is the first time banks in Lebanon have been able to participate in equity. Loans have been there for SMEs for some time now, and the central bank has always helped them and that has had a positive effect on the economy as a whole, but this time it’s equity and that’s the difference.

We have conditions. There are three conditions when it comes to getting investment through Circular 331. Innovation, so an element of creativity; technology, where we didn’t want to limit it to ICT so we opened it up to other sectors that would combine tech, so media, environmental projects, healthcare etcetera; and that the company is incorporated in Lebanon.

We have invested $280 million. So far we have more than six funds approved as well as about 12 startups. The volume of these funds go from $30 to $75 million and their ticket sizes vary from $300,000 and $500,000 to $3 million and $5 million. If we hit the threshold we’ll have something new, the $400 million isn’t exact, it can always be more depending on the capital of the central bank.

We needed to address the seed stage of funding. We’re now seeing two funds addressing this and it’s important as it was missing previously, funds were not encouraged to take the risk before.

There is direct investment from banks now. Before they were reluctant because they didn’t have the experience but now they’re moving in and that’s as a direct result of the circular.

It’s too early to talk about trends. Let’s be realistic. It’s only in the last year that we are really seeing a move, but we are noticing a leaning towards software solutions, banking solutions and actually we are working on finding a flagship for the country, to see what Lebanon is best at. This is what the UK Lebanon Tech Hub is working on - this is part of their study, to know what Lebanon can be known for in the future.

I get calls all the time from Lebanese expats wanting to come back. It’s not only words. We have seen companies come from outside to register in Lebanon. This makes us really happy because this is what we want at the end of the day - those Lebanese who left because they didn’t have access to finance. We’re also seeing two funds made up of Lebanese expats. In any ecosystem there are challenges and we have solved the biggest which is access to finance.

We’ve gone a step further with support. When we realized there wasn’t enough deal flow we decided to give a 100 percent guarantee for boot camps, training centers and accelerators, ensuring this deal flow for the ecosystem.

The banks are learning fast. When we started we felt there was this gap, the non-experience of the banks. They soon saw what they had to do because they realized this had to be taken very seriously, to build this sector is not a joke. It will be one of the three sectors that will drive our economy forward, along with banking, someday… one day, fuel and oil.

We’re drawing a road map. We are working on this with the UK Lebanon Tech Hub. The future is that we’re taking it step by step, we’ll still be here for the funds and startups and benefit from the circular, as well as focusing on our annual conference, the BDL Accelerate. We will not stop, it’s a long journey.

We’re creating a reality for others. If you want to attract investors you have to make the environment business friendly, so maybe this isn’t totally in our control but we are preparing the environment for things to change, rather than waiting for everything to be rosy.