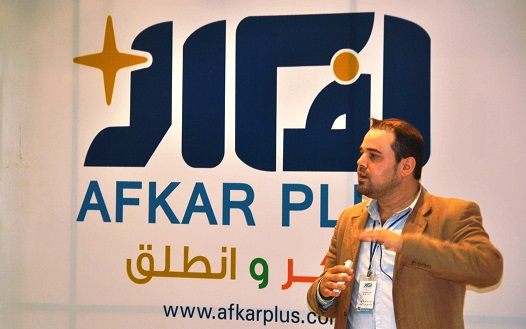 Cofounder Samer Al-Aswad addresses the audience at the launch of the Afkar+ incubator on August 8. (Images via Afkar+)

Syria's first incubator, Afkar+, officially launched this month in Hama after winning first place in Jusoor's  Entrepreneurship competition. Undaunted by four years of a savage war that has left the country in ruins, Afkar (which means ‘ideas’ in Arabic) is now accepting applications from Syrian would-be entrepreneurs.

"We want to give Syrian youth who have applicable business ideas the chance to nurture these ideas and grow them,” said cofounder Samer Al-Aswad. "We plan to offer a 6-12 month incubation program."

Although Hama, about 210 kilometers north of Damascus, is safer than other parts of the country, it's easy to wonder why anybody would want to launch a business in Syria.

"People always ask us why we chose to start a venture in Syria," Al-Aswad said. "But investing in businesses is crucial now in Syria. We see young people who are leaving the country to immigrate, who feel like they don’t know what to do because they have no jobs.  Investing in small ventures moves the economy in Syria and creates job opportunities. SMEs are important to have mobility in the country."

It has been just two weeks since the launch it's received nine applications in sectors including IT, nutrition, alternative energy and media. One of the applicants is a woman. 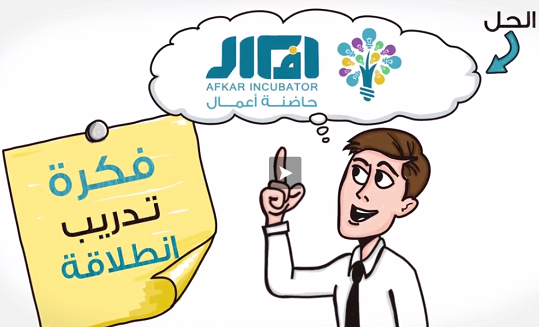 "Investing in small ventures moves the economy in Syria and creates job opportunities."

It's good to be prepared

Aside from the typical hands-on mentorship that incubators provide in their offices, Afkar+ plans to provide an online platform that acts as a virtual incubator, where services and mentorship can be offered online.

"There is always the fear that something will happen all of a sudden and people will not be able to go out," Al-Awswad said. "So, we’re preparing ourselves to take precautions against security issues, and to help people who can't travel outside."

While this may seem like a practical solution to handle safety issues, the cofounders are powerless when it comes to other challenges, like power cuts and electricity shortage.

"It is unpredictable," said Al-Aswad, over a Skype interview. "For example, today the [internet] connection is good. Tomorrow I don’t know how it will be. We hope for the best."

Having a cofounder abroad, however, is certainly helpful in running an online platform.

"My cofounder, Fadi Amroosh lives in Spain,” Al-Aswad said. “He takes the role of online administrator whenever I'm not connected."

Winning the Jusoor competition gave the cofounders $30,000 to work with. They estimate that should last them a solid year and a half.

Afkar+ will choose five startups for its first incubation round, scheduled for the beginning of 2016.

"We will not be making any profit in the first year,” Al-Aswad said. “However, since we own 5 to 10 percent equity of startups, we will be working hard to have at least one successful startup in the first year."

Afkar+’s cofounders plan to supplement their income with corporate consultancy and training services.

"We need to be creative with our strategy," Al-Aswad said. 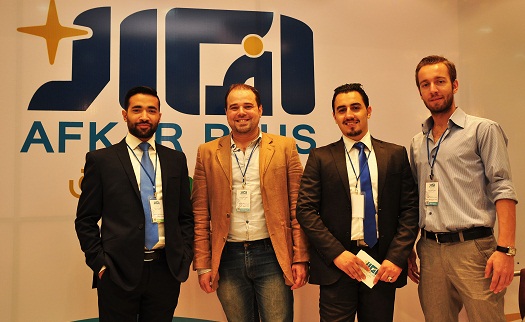 "On a legal level, we don’t have laws that regulate the startup ecosystem in Syria, which is the case in many Arab countries," Al-Aswad noted. "That complicates matters a bit. But the problem can be solved through legal contracts between us and the startups we deal with. This gives a legal structure to our relationships."

Another option is to emulate the way incubators in nearby countries deal with their legal affairs.

"We plan to study how incubators in Jordan and Lebanon and the UAE operate, and how we can benefit from them," he said.

While these challenges seem obvious and expected, the departure of so many of Syria's youth may pose a tougher battle for Al-Aswad and his partner.

"The migration wave has really affected the skill market. People don't know much about entrepreneurship. We plan to solve this problem through our online platform, by giving tips and advice."

Plan A is subject to change

Despite taking precautions, the cofounders are realistic about the possibilities of urgent security issues. "If the situation [in Hama] got serious, then we would have to relocate to another city," said Al-Aswad. "Another idea we have is to form partnerships with incubators abroad, like Oasis500 and Altcity's [bootcamp]. That is, if we prove to be a good incubator."