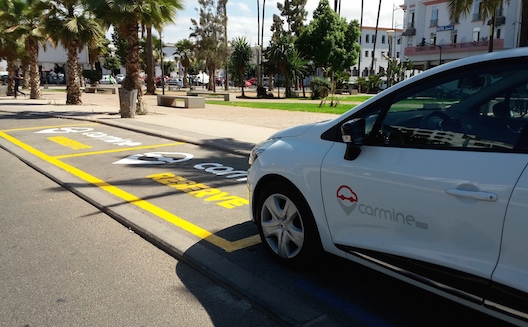 Carmine's cars now have their own parking spots. (Images via Carmine)

It’s a safe bet that not many in Casablanca know what car sharing is.

But one 27-year-old business school graduate is bringing such a service to Morocco’s largest city and making believers in the concept.

Mohammed Mrani Alaoui has just reached an agreement with Casa Développement, the company in charge of development of the city of Casablanca to get access to public parking spots. His service, Carmine, has left the starting line.

Mrani Alaoui was introduced to the car sharing concept in the US where he used Zipcar.

More than 800,000 people are Zipcar members, and in a sense they share a pool of cars. The service offers more than 8,000 cars that clients can access from many places anytime they wish. They can pay to use a car by the hour or by the day and all expenses, including gas and insurance, are included.

But it’s not just available in the United States. Zipcar has expanded to Europe, and in Turkey it’s all the rage. Local company Yoyo raised $5.5 million in 2013 and boasted 10,000 members a year ago.

Mrani Alaoui was unable to find a car sharing service upon his return to Casablanca, and with some research realized that noboby had attempted to implement the concept in the MENA region.

Not just for developed countries

“It’s an opportunity. If [no one] has came here, it doesn’t mean that it’s not an interesting market bur rather that they’ve seen other opportunities,” Mrani Alaoui said. “I have the possibility to make this market mine.”

He initially thought that young professionals who don’t want to own a car (like him) or don’t want to buy a second car would be his target users. But his pilot showed Mrani Alaoui that his biggest user base was companies that wanted to access cars only when they needed to, rather than buy or lease cars for a minimum of four years.

This is not a niche. Mrani Alaoui believes 90,000 Casablanca residents have drivers permits but no cars to use, and have enough money to afford a service like his.

But whatever the opportunities may be, it isn’t an easy project to take on. 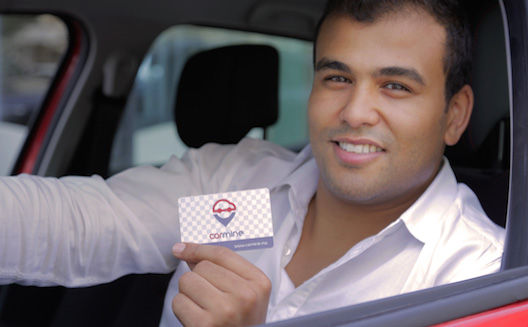 “It was a big challenge, I wanted to take this risk, and be a first mover,” Mrani said. “I under estimated the complexity of the service; it wasn’t that complicated in my head.”

The technical part was the easiest: an international subcontractor developed the the system’s hardware and software.

It was legal issues, rental permits, and convincing an insurance company to cover his venture that proved tricky.

And then he had to educate his market, explain the car sharing concept and convince people that he and Carmine were “trustworthy”.

“People are responding positively but we need to hire more people to offer a good follow-on service,” Mrani noted.

Mrani and his 70-years-old partner, who acts as a business angel and advisor, have since hired a marketing manager and a fleet manager.

Getting the big players on board

Mrani is forming partnerships - like with the city of Casablanca - to prove Carmine’s credibility.

“We wanted to have access to public parking spots from the start but it turned out to be complicated,” Mrani Alaoui said. “We had to find the right contact to introduce us to the right people within Casa Développement.” explains the entrepreneur.

It took them six months and introductions to several people before they Mrani Alaoui and his team were able to schedule a meeting with the people in charge.

Fortunately, as Casablanca is looking to transform into a smarter, cleaner city, convincing those folks to give Carmine access to public parking spaces at an affordable price was easy.

The number of cars on Casablanca’s roads will be dramatically reduced if people can use Carmine’s cars as needed and public transportation the rest of the time.

Zipcar’s website notes that one in four members say that in the absence of the service they would have purchased or leased a car.

Paying for to use a car by the hour also make people realize the cost of driving, and reduce the number of  trips done in car.

Mrani Alaoui also reached a deal with Fiat to to get five cars at a low interest rate. Now, they have ten cars parked all across the city from the Technopark to Casa Port.

The self-funded company now has 600 members, 100 of whom have paid their annual fee and 40 active members, exactly the number they wanted to reach during the pilot.

And Mrani Alaoui is now in talks with investors in MENA and Morocco to raise money to reach 3,000 members and 30 vehicles in a year.