It was clear at Startup Grind Ramallah on Thursday that teams matter less in comparison with the actual product or service they’re selling.

“Show me a product a customer wants and I’ll be more inclined to make an investment in your company," Dave McClure said to his audience. 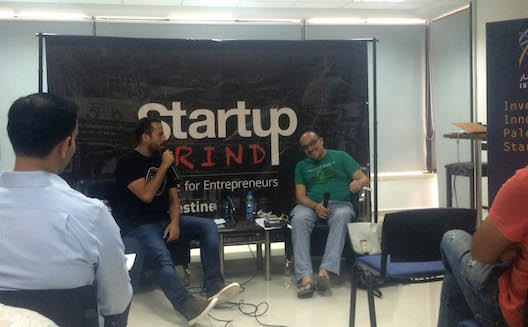 McClure, a founding partner of 500 Startups and known for his robust critique of startup pitches, came to Ramallah to speak at Startup Grind. It was evident his statement shocked some members of the audience.

“Put aside your preconceptions of what a good founder is going to look like, or sound like, talk like, etcetera, because at the end of the day, there is no set criteria for a perfect entrepreneur, its better to look at the product than the team,” he continued.

Rather than the skills that one might assume an entrepreneur should possess, McClure emphasized that customers are the driving force behind any entrepreneur’s success.

McClure has a track record of investing in successful startups. When talking about his life and career, he said he started off as a programmer, then entrepreneur, then angel investor and then horrible investor - he remarked in a joking manner.

Lately, he has been focused on investing in companies in emerging markets, particularly in the MENA region, Spanish speaking countries and Japan.

He explained that there are untapped opportunities for the Arabic speaking market and that it would be easier to penetrate than the US, for example.

“I’m more excited about companies reaching Arabic speakers in the region,” he said. “There’s more opportunity and it’s much easier to enter.”

The audience was delighted by McClure’s presence in Ramallah.

“It is great to have Dave visiting Palestine to explore the entrepreneurial scene here,” George Khadder said. “He is an icon in the entrepreneurial scene, globally. With the expansion of 500 Startups in the Middle East and the fund, coming to Palestine is a great thing and shows that although the tech scene here is small, it is expanding and it is growing and grabbing the right level of attention.”

McClure was adamant about the Middle East being a superb market for ecommerce and SaaS businesses. Companies that aren’t necessarily tech, but have a tech component are important to McClure, and he believes they are fairly simpler business models for the ecosystems currently in place in the region.

“Given his strong network and experience it felt like a new channel of opportunities/connections were presented for Palestinian startups,” said Shurouq Qawariq, another entrepreneur who came to hear McClure speak.

What is the biggest value that McClure provides his investments, one person asked.

Money, McClure said. “Besides money, you get an array of mentors and guidance for your business, but you also get a check. Our goal is to spread capital, and we like to give capital to people who don't have easy access to it.”

A mistake he made early on was writing checks too big, too early. He recalled a situation where he had $300,000 to invest in early stage startups. He wrote one check for $50,000 and another for $100,000 and was half-way through the savings after 6 months.

The startup SlideShare has a soft spot in his heart, McClure said, when asked what was his favorite investment.

“The typical entrepreneur is a white nerdy male. SlideShare was unique, in that the CEO is Indian-American and a woman,” he said. “The founders were also passionate and knowledgeable about the work they were doing.”

McClure also discussed the extra difficulties for women and “brown people” as founders, especially in developing countries. “Investing in women founders in emerging markets is imperative, and something we’re interested in doing.”

And what’s a perfect day like for Dave McClure, somebody asked.

“Being given $20 million and only using 1 million of that amount to invest in 10 companies,” he said.

The idea is to increase your statistical chances in success stories, he noted. By investing smaller amounts of money in many companies, your chances of making a return increase.

More seriously, McClure highlighted the significance of investing in companies in the region. His team has already invested in ShopGo, an ecommerce platform for the Middle East and Wuzzuf, an online job platform in Egypt.

And, with consumers in the Gulf more comfortable making transactions online, McClure said his team is looking for startups in the Gulf.

But he believes customers in the Levant will catch up in a few years. Again, he stressed the importance of customers being the leading factor in a startup’s success, and excelling in online marketing.

McClure doesn’t dismiss politics as playing a major role in his expansion in the region and wishes governments would remove some of the difficulties investors face.

“Am I under more scrutiny with the US government because I’m partnering with investors in the MENA region? Absolutely. But that doesn’t mean I’m going to stop anytime soon, there’s not a potential for opportunity - the opportunity is now and it’s here.”

Rawan Abu Ish’ira, program coordinator for the Digital Entrepreneurship Program at Leaders said: “Having Dave McClure come to Leaders Organization was one of the most amazing experiences for us. It’s good to hear from the industry’s experts because it helps the ecosystem to develop faster. He’s already given us a lot of input for our programs and the accelerators in town.”