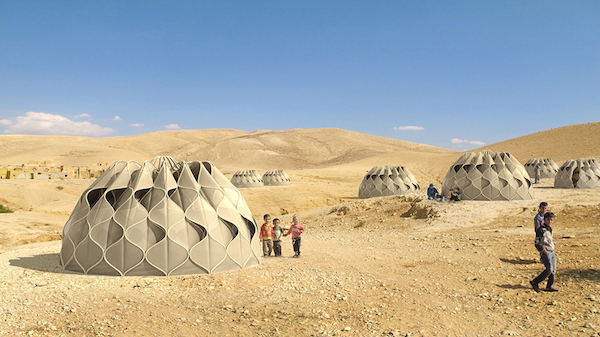 What the tents, in use, could look like. (Images via Abeer Seikaly)

Nearing the half-decade mark, the Syrian Civil War has by modest estimates already created four million refugees and driven at least seven million inside the shattered country to abandon their homes.

Unfortunately, those forced to flee frequently escape one battle only to encounter a new one: the struggle to live normal lives in crowded refugee camps, or finding basic shelter on the road between their old lives and their new.

Temporary dwellings for Syrian refugees are often nothing more than simple tarpaulin tents. These are tasked with providing protection from scorching heat and bitter cold, and shielding inhabitants from rain and snow.

Seeing this aspect of the crisis unfold, Jordanian-Canadian architect and designer Abeer Seikaly decided to use her unique set of skills to do something about it.

Over the last two years, Seikaly has worked on developing an innovative multi-purpose tent shelter that she hopes can be put to use aiding displaced individuals such as the Syrian refugee community.

Unlike the austere tents seen in images of refugee camps like Zaatari in Jordan, Seikaly’s tent harnesses renewable energy, uses unique structural fabric allowing controlled ventilation, and can be broken down and transported easily.

“The intention of the project is to help those in need, those in conflict zones, refugees,” says Seikaly.

And she intends to do that by creating a shelter that enables people to exist in harmony with their surroundings, rather than battling it.

Work began in 2013, when an early prototype of Seikaly’s tent won the Lexus Design Award. That, and seeing current events, helped convince Seikaly that her design had promise.

“The conditions that were present at that time, with the Arab Spring, and the refugees, coupled with my aspirations of creating flexible structural fabrics, it made sense for using its potential uses as a tent,” she says.

So Seikaly set to work developing and refining her prototype further.

The early prototype drew inspiration from everything from snakeskin to traditional cultural aspects such as weaving and nomadic lifestyles.

From the outside, the tent is a compact, dome-like living structure resembling a yurt—but with scales.

The structural fabric is weatherproof, lightweight and flexible, offering a dual-layer ventilation system that can close up to shield from wintery weather and open to allow air circulation during the summer.

Rainwater can also be collected from the top of the tent, where it filters down the sides to storage pockets.

Additionally, the tent can potentially provide basic sanitation, like showering; the tent offers a thermosiphoning system that uses heat from solar radiation striking the tent to draw water upwards from the storage pockets, turning the tent into a showering facility.

That same solar energy striking the tent can also be collected and stored in a battery for future use, providing another source of renewable energy.

Although the existing prototype and its different features reflect what the eventual design will look like, Seikaly is still working on updating and streamlining a final version.

“There are parameters we’re working with: it should be lightweight, it should be foldable, transportable; we have rough ideas on dimensions, how much electricity we need,” Seikaly says.

The tent itself has no formal name yet, but Seikaly refers to the project as a whole as “weaving a home”.

Seikaly spent the last seven months working with an engineering firm in the United Kingdom to finalize the design, and hopes to have the tent ready for widespread use soon.

She doesn’t yet have a confirmed plan for how her tent will be introduced to vulnerable communities such as refugees, but Seikaly says she’s considering several possibilities as she continues finalizing the design.

And as she does this, people are eagerly awaiting its arrival.

“I receive emails on a daily basis from all around the world asking for prices, for availability, for costs, and so on,” she says.

According to Seikaly, she answers each email, informing them that the tent is still in development.

And part of the reason that the development process has taken so long is because she’s had to transition from being simply a designer to a product manager.

Developing the design has involved collaboration with experts across multiple fields in order to combine all the tent’s different capabilities - such as water collection and solar energy collection. 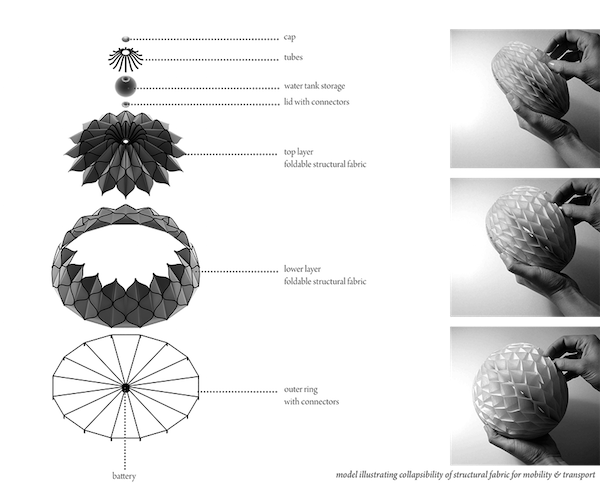 “We’ve gone through many iterations,” Seikaly says, adding that every time she’s arrived at a solution, seemingly 10 new problems arise.

And she also notes that there are legal and patent procedures she needs to tackle before the project is finished.

But despite the long development process and the obstacles still looming, Seikaly hasn’t lost sight of the goal she established when she undertook the “Weaving a Home” project.

“I see architecture as a social technology,” she says. “I really believe that the environment you live in reflects your behavior as a human being.”

The cycle of wars and natural disasters that plague humanity may never stop expelling people from their homes, but for Abeer Seikaly that doesn’t mean people can’t still have the opportunity to live happy, healthy lives.

“It’s about giving people back their dignity.”