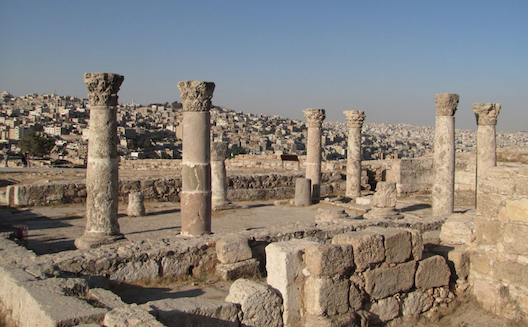 Jerash, Jordan: more than 60 percent of MENA's startup support institutions are based in Egypt, Jordan, Lebanon and the UAE. (Images via Wamda Research Lab)

Anyone who believes in the potential of the Middle East’s startups will be gratified by the progress over the last decade.

Countless businesses and support institutions exist where there were none before, and new funds and accelerators come online every year.

Wamda’s research team mapped the ecosystems and surveyed nearly 500 entrepreneurs on the challenges to growing and scaling their companies.

The findings are striking.

With those four countries alone responsible for more than 60 percent of new ecosystem support institutions created since 2010, they are the Middle East's axis of innovation.

More than 70 percent of the founders surveyed were male and the majority worked or studied abroad before returning to the Middle East.

More than 80 percent of the institutions mapped by Wamda researchers since 2008 were created by local stakeholders.

One such locally-bred organization is Oasis500. It was launched in Amman in 2010 and, although some incubators were already operating in the region, Oasis500 was the first to offer an integrated startup development program: one that coached entrepreneurs on how to formulate a business model and effectively develop and pitch a product or service.

“Before spreading the word ‘entrepreneurship’, the focus was on developing business plans and five-year projects,” chief operations officer Abed Shamlawi said. “All this has changed. The fact is you need a plan but not a five-year plan,” he continued.

“Market changes, market dynamics are becoming faster and faster. You need a mechanism that responds to market needs and customer requirements, not a five-year plan.” 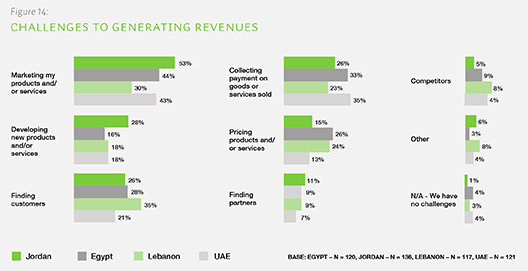 The challenges to generating revenues are varied and many.

Marketing, collecting payments and finding customers are the top hurdles for generating revenues across all four countries.

Nearly half of the entrepreneurs in the UAE, Egypt and Jordan told Wamda’s researchers that marketing their products and services was a challenge to generating revenues, compared to a third of Lebanese entrepreneurs.

Founding partner of Dubai-based accelerator AstroLabs Louis Lebbos says although MENA’s startup ecosystem has made undeniable progress over the past few years, funding is a problem.

“In early 2013 there was much less Series A money available in the region,” Lebbos said. “I feel that it’s fully funded now. Series B and Series C money is super dry right now.”

The Wamda report shows the number of investments in startups increased from about five in 2009 to more than 20 in Egypt and about 15 in Jordan and Lebanon, but most were seed and early stage investments ranging from $1,000 to $50,000.

But it’s not just a shortage of cash holding the ecosystem back. Nearly 70 percent of Egypt, Jordan, and UAE companies said finding talent is a challenge, and 63 percent of Lebanese startups.

“There is a huge gap in talent,” Lebbos said.  “Universities are decades behind. Universities will never teach these skills. Our hope is to plug this gap.”

Wishing to scale to Saudi Arabia and the UAE, and doing so are two different things.

Despite the dollars and the support institutions on the map now, expansion remains stubbornly difficult.

Entrepreneurs from all four countries wish to scale into Saudi Arabia and the UAE, but less than 10 percent have managed to do so.

Expanding inside the UAE isn’t much easier. Though 18 percent of UAE entrepreneurs have expanded their presence in the UAE, just 3 percent from Egypt, 9 percent from Jordan and 10 percent from Lebanon have been able to scale into UAE.

There are a number of reasons why. It’s difficult finding partners to help expand across borders and setting up the business is expensive.

"In terms of market expansion we need to do a lot there,” said Flat6Labs CEO Ramez Mohamed. “I think entrepreneurs and startups in the region are a little bit more advanced than how the market is expanding. Maybe expanding to markets outside the region will be something they need to do to survive.”

Despite the efforts of groups like AstroLabs and Flat6Labs, which hold workshops and trainings, formal educational institutions are still lacking. There is a lack of cultural interest in working for startups that still hamper the hiring process, and the prospect of working for a startup is not attractive to most job seekers.

However, the report demonstrates beyond a doubt that the wave of support for entrepreneurs is indeed growing across the region and the four countries highlighted in the study are home to the bulk of it.