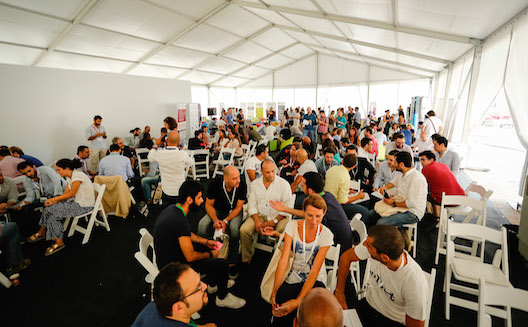 Getting to know you. Mix N' Mentor Beirut kicks off. (Images Wamda with Sam Fakhoury)

Not too far from the location of recent protests over Lebanon’s rising piles of trash, Wamda hosted its third Mix N’ Mentor of the year in Beirut’s Digital District.

Habib Haddad, Wamda’s CEO, kicked off the event with a reference to the issues being raised in Lebanon right now. “An entrepreneur is anyone who thinks the status quo sucks,” he said, quoting Aramex founder Fadi Ghandour.

“You’ll never fully know how it’s received/works until it’s launched,” was one piece of advice from Edy Maroun, Anghami cofounder, to his table of entrepreneurs seeking advice on business development. “Don’t delay the launch.”

Given the country’s reaction to the government’s approach to problems such as trash collection, the statements were apt.

“We don’t operate in silos,” Haddad said. “We operate in communities.”

Appropriately, the issue is of startups solving problems that governments aren’t addressing. 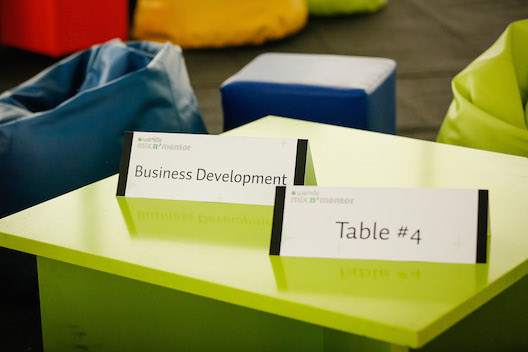 One of the four table discussions that took place in the morning.

This was the second time the Marketplace was included in the Mix N’ Mentor format, pairing five corporates with local startups who pitched for partnerships.

Aramex, DMS - Choueiri Group, Payfort, Touch and Uber sat with entrepreneurs, handing out green cards to those with whom they were keen to conduct follow up meetings, yellow for the ideas that needed a bit of fleshing out, and red for a no. Eight were handed ‘green cards’ for the solutions they proposed to the corporates.

Uber: With the intention of making the most out of transport, Entreprenergy and Startup Grind Lebanon were both able to pique the interest of Uber to supply free rides to the attendees of their various event in and around Beirut. They then handed out three ‘yellow cards’.

Payfort: Only recently expanding their operations to Lebanon, they were very keen to conduct follow-on meetings with all of the startups that came forward, including Smart Tracking Solutions (STS), TopShou, an app that helps you chose your daily outfits, and Kuwaiti app Dizly, for buying gifts online. However, they did award one green card to ShopBuilder, a market automation tool for online merchants.

Aramex: Impressed by those stepping forward knowing exactly what they wanted from Aramex, they gave out five green cards to startups - STS, Onlivery, Dizly, UrbaCraft and Slighter; along with five yellow cards.

Touch: Will be selecting one ‘star’ entrepreneur from the green card holders for whom they will give special coverage on their various marketing channels. Handing out six of those ‘green cards’, the Lebanese telecoms corporate is going to be working with ShopBuilder, Fallound, Slighter, TopShou, Tulos, STS; along with five yellow card recipients.

The workshop on term sheets threw up some words of wisdom from Lana Alamat, General Counsel at Wamda Capital. “Venture money is not the only source of money. It’s not always the most appropriate form of capital.” And to find out more about how finance issues for startups were discussed watch out for some insights later this week.

On the same table Techstars’ Ed Roberto advised entrepreneurs to find a story that would best explain what their startup does. “Everyone here has to be good at telling a story with imperfect information. If you can tell the story, I can make the decision about the risk. If you have no story, I have to fill in the blanks.”

Keeping entrepreneurs on the straight and narrow when it came to their focus, Hind Hobeika, creator of Instabeat, stressed the point of needing to pick one business idea. “Is it mail forwarding, restaurant delivery, amazing delivery?” she asked one entrepreneur on her business development table. “Break your dream down into small steps”.

Céline Khairallah, founder of Scene Beirut, a homeware startup, told Wamda that she liked coming to the Mix N’ Mentor events as it gave her new ideas and tips for her business, as well as always being able to find someone that would help her with a problem.

With 130 startups in attendance, all looking for solutions, as well as ideas, on how to carry their business forward, the day ended with new partnerships for some, and inspiration for others. “You’ve got to be dedicated 100 percent,” said  Abdallah Yafi of Y Venture Partners. Indeed his brother Ghaith concurred that “if you are not focused, your team won’t be focused.”