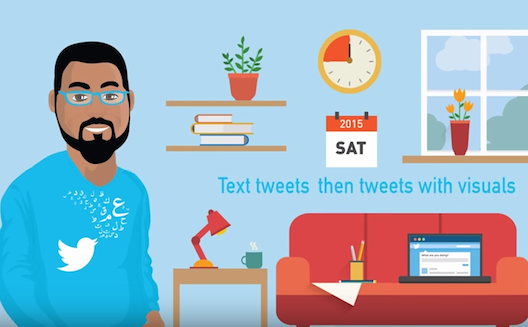 A screenshot from the video created along with the TOP report

Saudi Arabia is still growing into a market that regional and global tech entrepreneurs want to enter and dominate, according to social media agency The Online Project.

YouTube’s popularity in the Kingdom has played a big role in making the market as seductive as it is now. This year, YouTube reached a new high. It became the second most visited website after Google search in Saudi, with over 2.9 billion video views up until the end of July.

The Online Project, commonly known as TOP, a regional social media agency, released a report yesterday that assesses how Saudi social media consumption has changed over the past two years. Reintroducing Social Saudis - a “throwback report”, according to a TOP statement - is an update of the TOP’s first study released in 2013.

This year’s study looks at Youtube, Facebook, Twitter and Instagram’s popularity in KSA, and highlights key stats and changes that are affecting the social media scene.

TOP also published a case study on video that compares YouTube with Facebook. YouTube has the highest rate of user engagement in Saudi Arabia, even more so than the famous photo sharing app Instagram.

Based on the data collected, the study re-identified common behavior trends associated with the typical Saudi Arabian social media user in 2015:

Youtube is the network that attracted attention the most as it witnessed a 130 percent increase in channels subscribers (600,000) in comparison with 2013. The average views per video is 105,900, and the top 30 channels in Saudi post twice a month with an average video duration of 4:13 minute.

Additionally, the report highlights how Facebook climbed up to become the fourth most visited website in Saudi, and its number of users increased from 7.8 million (in 2013) to 11 million users this year, 3.2 million of which are expats and most of which are men.

With Facebook’s English interface as popular as the Arabic interface, the Arabic language remains the most popular language with viewers. And engagement received on Arabic posts beats the English ones nearly 8-fold.

About 48 percent of Saudi Facebook users utilize the Android platform, and 11 percent are iOS users.

Twitter is the fifth most visited website in Saudi, with 9 million active users by mid 2015, 27 percent of which have no written bio, and 16 percent have the default egg photo set as their profile picture. The average Saudi user tweets 5 times a day.

Instagram has been quickly rising and gaining momentum to the point it is now almost as popular as Twitter with 8.8 million active users by mid 2015. The average Instagram user follows 511 users and has 288 followers and posts around 12 posts a week.

Instagram shared posts are divided equally between photo and video posts. However, 73 percent of the engagement goes to video posts.

Based on dashboards, in-house developed tools and manual generation, TOP collected data, tracked tweets, comments, likes and shares to retrieve all the data mentioned in this study.