Unemployed youth in the Gaza Strip and the West Bank can now find virtual freelance work more easily, following the launch of an initiative to connect young Palestinian freelancers with employers in the Gulf.

Nabbesh, an online marketplace for freelancers and employers in the UAE and other Gulf countries, recently launched Fursati, which aims to connect Gulf employers with remote workers in Palestine. 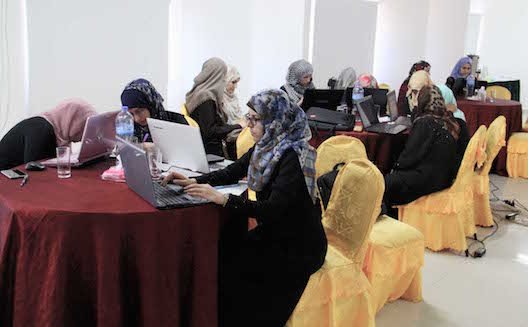 Freelancers hard at work at a recent Fursati workshop in Gaza. (Images via Fursati)

Unemployment in Palestine has soared over 40 percent in Gaza in recent years, due in large part to restrictions imposed by the Israeli occupation.

Currently a pilot project, Fursati (“opportunity” in Arabic) is targeting Palestinians in Gaza and the West Bank with the goal of offering 300 paid job opportunities. Nabbesh also will help employers find qualified freelancers to work for them from Palestine.

Fursati is the result of a partnership between Nabbesh and Qatari non-profit Silatech, another organization working to create employment and opportunities for young Arabs.

“The amazing thing about virtual work driven by technology is the fact that you can measure it,” said Nabbesh founder and CEO Loulou Khazen Baz. “Silatech works on big impact projects and they wanted to work on an initiative that will have a huge impact down to the decimal [point] so that it can be measured.”

Though Palestinian youth are highly educated, motivated and eager to work, political realities on the ground severely limit their job prospects. As such, remote work is one of the few available options to circumvent physical borders.

To use Fursati, freelancers must go through a vetting process and attend workshops led by Nabbesh and Silatech community project managers. Topics range from the basics of remote work, how to build resumes and cover letters, and how to produce work which meets or exceeds employers standards. 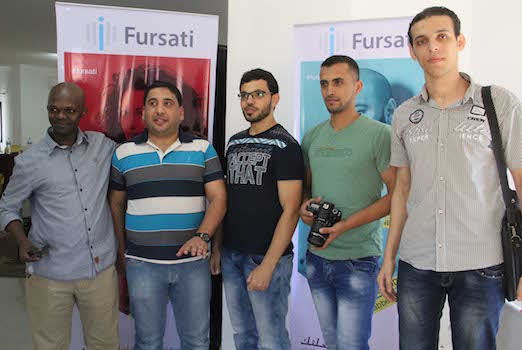 A group of freelancers pause for a photo at a recent Fursati workshop.

Nabbesh is running four workshops per week in Gaza now, with information on workshops in the West Bank to be announced.

The material should be familiar to most, as all who have participated so far have done some freelance work and have portfolios to show. They include developers, translators, graphic designers, amongst other skillsets.

“We had a few applicants already for certain jobs and we're following up the progress closely,” Khazen Baz said. “Our challenge is to ensure clients are confident enough about giving the jobs exclusively to Palestinian freelancers and we're witnessing some early traction.”

To offer clients an extra incentive, Fursati waives all commission fees that are ordinarily charged to businesses using the Nabbesh platform, a decision that should benefit startups in the region.

“Startups have to hire freelancers on a regular basis and normally need a lot of support when it comes to talent, and early stage startups don’t have the money to hire someone on a full time basis,” Khazen Baz said. “Entrepreneurs can benefit from this, and have access to this talent.”

Fursati will use a five-star ratings and review system that helps freelancers get recognition for their work and helps employers identify qualified contributors. Additionally, all wire transfer fees that freelancers would normally have to pay are covered by the project.

“Startups are getting the Nabbesh full service free of charge - consulting on the job post, waiving all commission fees and at the end of the day helping someone in Palestine earn a living,” Khazen Baz said.

To post a relevant job as part of the Fursati campaign, employers can enter the promo code ‘Fursati’ on Nabbesh and get connected with freelancers.

“With the Fursati program now in place, companies and clients beyond Palestine can get access to my services in a much easier way that wasn’t possible before,” she said.

Given the flexibility of freelance work, Khazen Baz saw a lot of potential for the program throughout the Middle East and beyond.

“If the pilot project is a success, we want to expand to other countries in the region and give the same opportunities to young people,”  she said. “Employability for youth in conflict zones is critical.”