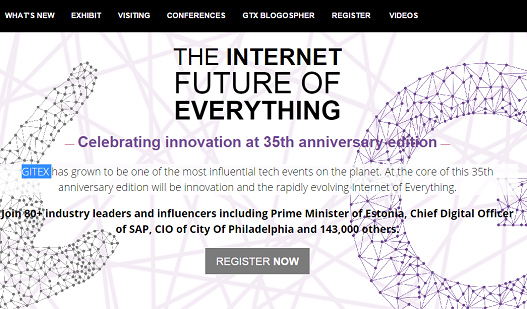 GITEX has grown to be one of the most influential tech events on the planet. At the core of this 35th anniversary edition will be innovation and the rapidly evolving Internet of Everything. More than 80 industry leaders and influencers including Prime Minister of Estonia, Chief Digital Officer of SAP, CIO of City Of Philadelphia and 143,000 others will be present at the even from 18-22 October at Dubai World Trade Center.

You will be able to rub shoulders with global visionaries from the world's leading companies, including representatives from Facebook, Alibaba, Coca Cola, Boeing, BP and Vodafone. Plus see the world's largest Drone manufacturers and a real time Robotics cafe live in action. Some of the event highlights are below:

GTX Innovation: The future of technology on display at GITEX. Innovative demonstrations of UAVs, Robotics, 3D onnexionsPrinting and Autonomous Vehicles.

A slew of features were added this year, including the following:

Participate in the GTX Ap Hack and develop ideas for next gen smart city solutions.

The Hackathon provides an environment for disruption and creative ideas: the essential tools for innovation.